New Delhi: As criticism grows louder over the apparent mismanagement of the country’s biggest auto show, the hosts have begun blaming each other.

The Auto Expo being held at Pragati Maidan in the Capital is hosted by the Confederation of Indian Industries (CII), the Society of Indian Automobile Manufacturers (Siam), and the Automotive Component Manufacturers Association (Acma).

“The capacity is 100,000 and the demand 200,000. We have a limitation: It’s the size of the ground," said Rajive Kaul, chairman of CII’s trade fairs council. He pointed fingers at the India Trade Promotion Organisation (ITPO), the body responsible for providing the infrastructure for such trade shows. ITPO, Kaul said, has done little to improve or add amenities even as the rent for the venue has risen by almost 50% over 2010. 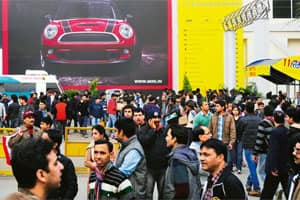 There is a need to demolish the old structures at the venue and rebuild ITPO, said Kaul.

“But ITPO may not be keen on ploughing back revenue earned from such shows into improving the venue, as it has been asked by the Delhi government, the owner of the land, to vacate it," said Dawar.

“There are too many stakeholders involved—the Delhi government, the central government, state governments which have their permanent pavilions within Pragati Maidan, and the diplomats," he added. ITPO officials could not be reached immediately for a comment.

Auto makers, who have been forking higher sums each year to participate in the Expo, are fuming. What has miffed them the most was the opportunity loss because of poor crowd control on 5 and 6 January—days restricted for the media, exhibitors and the so-called very important persons.

The two days saw a footfall of at least 90,000 people against an estimated 60,000. “While things were in control on Thursday, it really went haywire on Friday with the beginning of the weekend," said a Siam official who did not want to be identified.

It was impossible to manage such a crowd given the infrastructure available, he said.

As a swarm of general public flocked the pavilions to get a glimpse of the automobiles on display, the exhibitors struggled to find their feet, resulting in a near stampede.

On probing into how such a huge number of people could enter the venue on the two days when entry was restricted to specific people, CII discovered several fake badges.

In addition to that, non-operational barcode machines provided by ITPO made sneaking into the venue without genuine passes a cake walk for the gate crashers.

“The ITPO laid the cables only on the 6th evening after most fake badge-holders had already barged in and created a pandemonium at the pavilions," said the Siam official.

“It’s a very lousy arrangement. I have not seen such an arrangement anywhere else," said Peter Honegg, president and managing director at Mercedes-Benz India Pvt. Ltd.

V. Sumantran, executive vice-chairman at Hinduja Automotive, said entry to the Auto Expo on business days should be restricted.

“You have critical interactions with the OEMs (original equipment manufacturers) and suppliers, and it’s an opportunity lost," he said. “We (India) seem to go from the low of Commonwealth Games to the high Formula One race and then we are back to Pragati Maidan." Pointing out that the charge per sq. m at the Auto Expo in the Delhi is more expensive than the Frankfurt Motorshow, he said the infrastructure at Pragati Maidan left a lot more to be improved.

“It becomes important at a time when companies invest huge amount of money in setting up the infrastructure," said Vikram Kirloskar, vice-chairman at Toyota Kirloskar Motor India Pvt. Ltd. His firm spent at least ₹ 8-10 crore in setting up its stall at the expo, in addition to rent.

“I think it’s a good sign in a slowing economy," he said. “There has been a worry that consumer interest will start to flag. What a show like this does is rekindle interest, which we saw in the number of people."

The organisers are now considering if they should move out of Pragati Maidan, which has been hosting the show for almost two decades now. “We have an offer in Gurgaon," said the Siam official mentioned earlier. Haryana chief minister Bhupinder Singh Hooda “is talking to us and he is very keen on hosting an event of such a magnitude".

The other option, he said, would be to re-do the infrastructure at Pragati Maidan.

A commerce ministry official, who too did not want to be named, said the Haryana government has identified a land near the airport in Gurgaon for trade shows and is in the process of purchasing it.

“This kind of situation harms our image and a lot of problem, it seems, occurs due to the limited space," the official said.

CII’s Kaul said for any new venue to be ready to host a show of this proportion, it will take time and the new venue can be functional only by 2016. “People have short memories," he said, adding the auto companies will be back at the same venue in 2014.