Chennai: The “thump" is gone, but sales are booming.

Royal Enfield, a 119-year-old Anglo-Indian motorcycle maker with a cult following, has brought its distinctive bikes into the modern era with new and quieter engines and can’t make them fast enough to meet demand.

The once-sleepy company sold 74,600 motorcycles in 2011, a 40% increase, all made at its 57-year-old factory on India’s southeastern coast, and is spending $30 million this fiscal year in a push to double capacity and upgrade manufacturing technology. 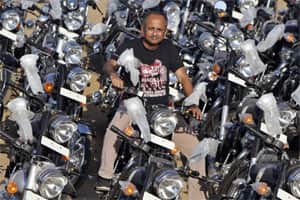 “Paradoxically, the more we make the more we appear to be falling behind. Only when the new plant kicks in fully next year will we be able to fully address the waiting periods," Venki Padmanabhan, chief executive officer of Royal Enfield Motors, told Reuters.

The company is best known for the powerful Bullet model, but it is the newer Classic series that is driving growth in a crowded and fast-expanding Indian market where 10 million motorbikes were sold last year.

“They’ve finally got the markings, the logo and the colour schemes perfect," said 35-year-old George Koshy, who works in an advertising firm and owns four Royal Enfield bikes, including a Classic 500.

Harley Davidson, whose bikes start at Rs560,000, is part of a slew of overseas manufacturers such as Britain’s Triumph and Japan’s Kawasaki that is ramping up activity in India to capture a growing premium motorbike market.

Purists still come to the company looking to buy a bike with the old engine, but they have to go to the second-hand market as production ceased in 2010.

Royal Enfield originally built motorcycles to be parachuted into enemy territory by British forces during the Second World War, and the classic styling and trademark thumping of its engine at full throttle drew a legion of gearheads to the brand, including television host and motor enthusiast Jay Leno.

It rolled out its first motorised bike in 1901 and entered the Indian market in 1949, where the Bullet, now in its 80th year of manufacture, became a staple on the country’s roads.

Royal Enfield, which stopped building bikes in Britain in 1970 and was bought by India’s Eicher Motors in 1994, expects to open a new 50-acre plant in the southern Tamil Nadu next year, taking capacity to 150,000 vehicles.

It is a niche manufacturer in a country where mass-market players led by Hero MotoCorp and Bajaj Auto sell cheap bikes as basic transportation and family vehicles.

The company sold just 3,200 bikes overseas last year and is looking to expand its export markets on the strength of its upgraded engines. It recently signed up dealerships in Malaysia and the Philippines, and is working to resurrect its distribution network in Germany and France.

An auto-industry veteran, the 49-year-old Padmanabhan started his career with General Motors in Michigan and took the top job at Royal Enfield in January 2011 after two years as chief operating officer.

“For many motorcycle companies, when they change engines it’s like life and death - if you don’t do it right you’re finished," he said.

“For us we think we’ve been successful with the UCE engine, which just happened a little over a year ago, and there’s still a lot more to be done with this engine," he said.