New Delhi: Bharti Group, which runs India’s biggest mobile phone services firm by customers, plans to launch a direct-to-home or DTH television service within eight weeks and aims to boost its distribution reach for the new service by leveraging the nearly one million retail outlets where it sells prepaid phone recharge cards, a group executive said. 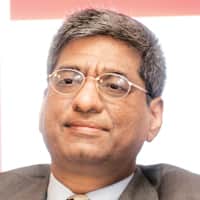 All set: Atul Bindal, president of Bharti Airtel, says the rates would be similar to those of existing operators and higher than cable TV rates. Photograph: Ramesh Pathania / Mint

“We are in a high state of preparedness to launch our DTH services. A trial launch has been done among the employees and the feedback is very good. We are putting in the last minute changes to reach the last town, and to have a footprint like the (Airtel) prepaid recharge value chain," said Atul Bindal, president of Bharti Airtel. “We want to leverage on every bit of that (Airtel brand)."

Bharti Airtel has 923,472 outlets across India as in end-June through which it sells prepaid, postpaid, and value-added service offerings.

On pricing, Bindal said the rates would be similar to those of existing DTH operators and higher than cable TV rates. DTH firms such as Tata Sky Ltd, an 80:20 joint venture between the Tata Group and Star Group; Dish TV Ltd, an Essel Group company; and Sun Direct TV Pvt Ltd, a joint venture between Chennai-headquartered Sun TV Network Ltd and Malaysia’s South Asia Entertainment Holdings Ltd, charge between Rs30 and Rs300 (exclusive of taxes) a month for the service.

DTH services, introduced in India in July 2006, currently serve 13 million customers, according to industry estimates. Of this, an estimated seven million are customers of DD Direct, a free DTH service of public broadcaster Prasar Bharati, or Broadcasting Corp. of India, with the remaining six million split between Dish TV, Tata Sky and Sun Direct.

Though the segment currently serves only a fraction of the 75 million households served in India by cable and satellite based television services, it is poised for strong growth.

According to a report by industry body Ficci, short for Federation of Indian Chambers of Commerce and Industry, and consultant PricewaterhouseCoopers, the segment will expand at a 44% compound annual growth rate between 2008 and 2012. In comparison, cable TV households are expected to register a 2% growth. The DTH business will see three new players before the year-end. Besides Bharti Telemedia, Reliance Communications Ltd and Bharat Business Channel Ltd, the media arm of the Videocon group, plan to enter the market.

As players in a relatively infant segment, characterized by high customer acquisition cost and marketing costs, the existing operators have been saddled with losses so far. Dish TV has made losses of Rs665 crore between 2006 and now.

Bharti Airtel’s Bindal said his firm expected to benefit from serving customers who might also be among the 70 million serviced by Airtel’s mobile phone service.

“We entered the consumers’ home with voice, then it was data and broadband, now we want to give them a ‘one knock at the door experience’ with one bill and one service provider," he said. “Airtel will be the only telco that can do and make a difference as we have the underlying technology in terms of billing and convergence. This will not be possible for a standalone DTH player."

“Eventually the game plan for Bharti is to get into all the potential ‘telecom real estate’ and be a full scale telecom service provider. And DTH service launch by the company is one step in that direction. Arpus (average revenue per user) in DTH is much higher than the telecom," said Alok Shende, principal consultant, Acceindia Consulting. “Bharti is readying to offer multiple services (to the consumers) after the DTH launch. It just allows a lot of creative bundling strategy to happen."

The Airtel DTH service will use the so-called MPEG4 format for the first time in India with advanced security encryption systems, Bindal added. MPEG4, a media format used for compression of audio and video data in digital form, was introduced by the Moving Picture Experts Group in 1998.

Sruthijith K.K. contributed to this story.