Thanks for Visiting Mint
You seem to have an Ad Blocker on. Please turn it off in order to continue, or whitelist Mint
HOW TO TURN OFF AD BLOCKER
OR
REFRESH IF YOU ALREADY TURNED OFF THE AD BLOCKER
Home >Companies >Auto companies shrug off poor sentiment, ready for big splash

New Delhi: The Auto Expo, due to start on Thursday in Delhi, is being billed as the largest ever and will have a record 50 global automobile brands showcasing their wares, including eight global launches.

Interestingly, a slew of utility vehicles are also expected to be on display. Despite India’s reputation of being a market for small cars, auto companies expect this segment to expand and see it doubling by 2020 due to rising disposable incomes.

Now in its 11th edition, the expo will be held at a time when the world is preparing to face yet another crisis after the global meltdown of 2008-09. While car sales across the world have dipped, sales growth is coming from developing countries such as India and China. The event is held once every two years. 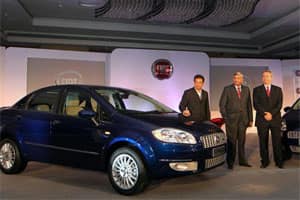 Fiat India officials pose for a photograph with Linea 2012 and Punto 2012 cars during their launch in New Delhi on Tuesday. Photo: PTI

Among the Bric nations, while the share of India has more than doubled in the last 10 years and that of China has grown 12 times, Brazil’s share has remained steady. Russia’s share in passenger car production has dropped due to growth slowing.

Not surprising then that global automobile firms have increased their focus on India, the world’s fastest-growing auto market after China. This will be reflected in the Auto Expo too, with the unveiling of 24 new models by domestic car makers apart from the eight by their global counterparts.

In addition, eight new two-wheeler models will be exhibited by local companies. In all, 50 new automobiles will be displayed during the Auto Expo. Topping the industry’s agenda will be two important trends that could change the dynamics of the Indian automobile industry in the coming years. A bigger focus in this edition will be on eco-friendly vehicles with the Indian government setting up the National Mission Plan for Electric and Hybrid Vehicles.

Rivals are seeking to challenge current market leaders in the utility vehicle segment such as Mahindra and Mahindra Ltd and Tata Motors Ltd. While Maruti Suzuki India will launch the multi-purpose vehicle Ertiga it will also display a five-seater concept sports utility vehicle (SUV).

With the 11th Auto expo just a day away, preparations are on in full swing to welcome car enthusiasts and dealers alike

The SUV is the company’s first attempt in years to look beyond the Gypsy and the Vitara. South Korean rival Hyundai Motor India Ltd will showcase a concept compact SUV, code-named HND-7, and a crossover utility vehicle, the Veloster. American manufacturer Ford Motor Co. is expected to hold the global unveiling of an SUV. Mahindra will launch the Rexton and the Korando C from the Ssangyong stable—a South Korean company it acquired in 2010.

This is unlike the last edition of the Auto Expo when participants, mostly global companies, unveiled several small car models.

With India expected to see at least seven million electric vehicles on road by 2020, according to a study conducted by Booz and Co. and the Society of Indian Automobile Manufacturers (Siam), the government and the industry are bracing themselves. Following last year’s budget, the government had set up the National Council for Electric Vehicles headed by Praful Patel, heavy industries minister, to ensure uniformity of regulations across all states. The government’s National Mission Plan for Electric and Hybrid Vehicles aims to promote their use and cut the dependence on fossil fuels.

“Pressure from regulators and consumers across the world has made fuel efficiency an immediate priority for all the companies, keeping in mind the environmental impact and the cost of running vehicles," said Vishnu Mathur, director-general, Siam. “Such a far-sightedness on behalf of the government augurs well for the industry. This will be the first edition of Auto Expo that will have a larger focus on alternative fuels. The Indian auto industry seems to be evaluating two paths in its move towards greener vehicles—CNG/dual fuel vehicles and electric/hybrid vehicles."

The task looks daunting. The Union government’s plan to put as many as seven million electric vehicles on Indian roads by 2020 may require an investment of ₹ 22,500 crore, according to a report by Siam. “Although, the RoI (return on investment) is double than the actual investments, it would be interesting to see the government’s response to the report," said Abdul Majeed, auto practice leader at PricewaterhouseCoopers.

Another analyst felt that the expectation of seven million vehicles looks “too ambitious". “First of all we don’t have the technology to develop such batteries, secondly Indian consumers will take time to understand the benefits of an electric or a hybrid vehicle and thirdly, the most important part, will be how will the OEMs (original equipment manufacturers) bring down the cost of such a vehicle?" said Yash Saxena, a consultant at Emergent Ventures India.

Japan-based Nissan Motor Co.’s electric car, Leaf, is the largest selling car in the world that runs on batteries. At least half the $33,000 price in the US is because of the battery.

In India, the showroom price of electric two-wheelers ranges from ₹ 26,000 to ₹ 43,000, while electric cars made by Mahindra Reva Electric Vehicles Pvt. Ltd, India’s only maker of such vehicles, start at ₹ 3.5 lakh. Around 100,000 electric vehicles were sold in the country in 2009-10, according to the latest numbers available with the Society of Manufacturers of Electric Vehicles.