Less than 1% of the pharma retail industry is now occupied by organized retailers such as Apollo Healthcare, Medicine Shoppe, MedPlus, Guardian Pharmacy and Subhiksha. Most drug retailers, known as “medical shops", are stand-alone neighbourhood stores.

The pharma market has nearly 800,000 retailers competing for customers, according to a May 2008 report by consulting company Deloitte Touche Tohmatsu. Several leading drugstore chains plan to expand their presence by opening outlets across more states, likely providing the impetus for consolidation.

“We will have over 5,000 stores across the nation by 2011 and there are several other players having similar plans. There is immense room for consolidation in the unorganized sector and it will start happening soon," says Madhukar Gangadi, the chief executive officer of MedPlus Health Services Pvt. Ltd, which owns the MedPlus chain. 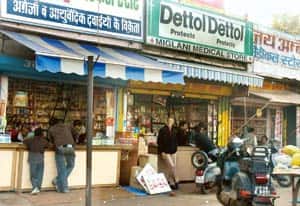 The franchisee model, according to Gangadi, will enable stand-alone chemist shops to be absorbed by organized retailers, triggering a consolidation wave.

Apollo Hospitals group president K. Padmanabhan said recently that Apollo—the largest organized retailer with nearly 650 stores—plans to more than double the number in two years. Even new entrants into the organized space such as Hyderabad-based RiteCare Pharmacy are looking at franchisee-owned expansion as they seek a national presence in the next three-five years. RiteCare has 10 stores in Hyderabad; it plans to increase that to about 75 before the year-end.

“We are seriously looking at franchisee-owned model to expand as this would help us to take in experienced store owners," said RiteCare managing director Seshu Guddanti.

The All India Organization of Chemists and Druggists, or AIOCD, which represents 515,000 pharma retailers across the country, acknowledges the potential for consolidation in pharma retail.

“In a typical urban or rural setting, it is easy to find nearly half the retail pharma stores making losses. Such shops have the option of shutting down or selling out. They have an incentive to tie up with a brand and continue their business in an attempt to survive," said A.N. Mohan, head of AIOCD. But he said pharma chains cannot assume they will have a smooth ride, given that local chemists have been in the business of retailing drugs for decades. Organized retailers counter by arguing that that retail chains will have a more wholesome bouquet of services to offer to customers, thus vaulting them into a different league.

“The ambience, ready availability of drugs, reliability and quality that chains can offer and, more importantly, price discounts based on the economies of scale in procurement that they enjoy, will ensure that pharma retail chains are able to attract customers," said Ashutosh Garg, managing director of Guardian Pharmacy, owned by Guardian Lifecare Pvt. Ltd.

Guardian runs 137 stores across six states and 16 cities and plans to expand to 250 stores by March 2009. It will invest Rs100 crore over the next 18 months in expansion.

“We are looking at buying up existing smaller chemists or renting the space from them and running our branded stores in that space," Garg added. “This makes business sense for us as it makes it easier to get commercial space in competitive urban markets."

“Once the consolidation phase is over, I expect to see not more than 14-15 retail chains and just over a lakh retailers in total," said Madhukar of MedPlus.

Sales at Vishnu Medical Stores, one of the 40,000 odd individual-owned pharmacies in Hyderabad, have declined by at least 25% to Rs6,000-7,000 per day, said store owner K. Venugopal Reddy. “Apollo started a store in my neighbourhood a year ago and MedPlus started a store two years ago," said Reddy, adding that price discounts offered by organized pharma retailers are difficult to match and have won over some of his long-time customers.

“For now, I am not looking at becoming a franchisee for any of the existing pharma retail chains, but if the situation worsens and my sales plummet further, I will re-evaluate my position," said Reddy.

The pharma retail market is growing at an annual pace of more than 27%, and organized retailers will have a definite edge, said Narayanan Ramaswamy, executive director, retail markets, at consulting firm KPMG.

Increasing brand awareness and quality consciousness could spur consumer migration to organized retailers because of value-added services such as diagnostics and lab facilities they are able to offer, he said.