Supreme Court directs Reliance Realty to furnish 1,400 crore as corporate guarantee to the govt within two days for the RCom-Jio deal

New Delhi: The Supreme Court on Friday cleared the sale of spectrum by Anil Ambani-controlled Reliance Communications Ltd to elder brother Mukesh Ambani’s Reliance Jio Infocomm Ltd (RJio) on the condition that the seller furnishes ₹ 1,400 crore as corporate guarantee to the government within two days.

This corporate guarantee, to be furnished by Reliance Realty, a unit of Reliance Communication Ltd (RCom), is in addition to the land parcel that has to be given as security, as directed by the Telecom Disputes and Settlement Appellate Tribunal (TDSAT) in an October order.

The Supreme Court also asked the central government to grant a no-objection certificate (NOC) for the takeover of telecom assets with RJio within a week from receiving the corporate guarantee.

The centre had challenged a TDSAT October order, which rejected DoT’s plea seeking bank guarantees before approving the RCom-Jio deal. The tribunal had also asked RCom to not sell a land parcel worth ₹ 1,400 crore for the time being so that it could act as a guarantee against the government’s demand for dues.

Kapil Sibal, counsel for RCom, opposed the furnishing of a bank guarantee as sought by the centre as the company was undergoing insolvency. He agreed that Reliance Realty would provide a corporate guarantee instead. 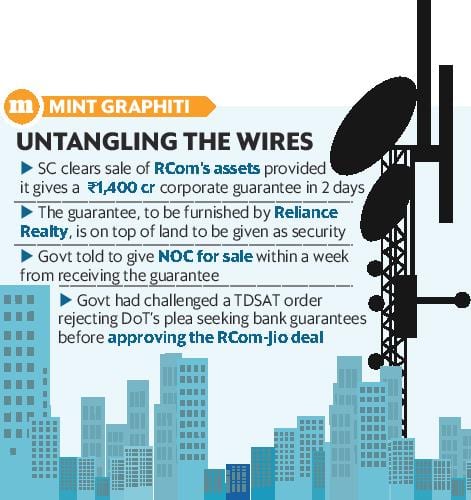 Sibal asked for the NOC to be granted in time, saying, “If the NOC is not given in time, they will lose ₹ 10,900 crore."

Additional Solicitor General P.S. Narasimha opposed the furnishing of land parcels, telling the court that they did not belong to RCom, “Please see if this security is enough. We can’t go from pillar to post to recover money... one has to look at titles and the deal."

Narasimha told the Supreme Court that the centre was looking for some kind of a security for the outstanding spectrum dues. He said the centre did not have details of encumbrance of the land offered by RCom as a guarantee.

Narasimha further argued that the telecom guidelines clearly mandate the government to secure outstanding dues only by bank guarantees, and by no other method.

In response to the centre’s plea, Sibal had said RCom was not in a position to make the payment as it was undergoing insolvency proceedings.

In October, TDSAT rejected a plea by the telecom department seeking bank guarantee of around ₹ 2,940 crore for its outstanding liabilities before approving the RCom-RJio assets sale.

The beleaguered telecom operator, which had been struggling with a mountain of debt and a failed merger with Aircel, finally decided to wind up its wireless business in December 2017.

Earlier, it had said that RCom will essentially become a business-to-business entity instead of a business-to-consumer company, and will provide submarine cable systems with latest technology to meet India’s growing cloud infrastructure and data capacity demand from global enterprises and over-the-top service providers.

It had also announced a deal with Reliance Jio under which RCom’s assets, including 122.4MHz of 4G spectrum in the 800/900/1,800/2,100MHz bands, more than 43,000 towers, 178,000 route km of fibre with a pan-India footprint and 248 media convergence nodes covering 5 million sq. ft, used for hosting telecom infrastructure, would be bought by Reliance Jio. RCom wanted to seal the deal by March 2018, but all assets have not been sold yet.

In August, RCom said it had completed the sale of its media convergence nodes and related infrastructure assets worth ₹ 2,000 crore, besides the sale of fibre worth ₹ 3,000 crore to Reliance Jio. However, the spectrum sale was stuck after DoT sought bank guarantees.

“This order is welcome because it protects the exchequer and, by that logic, the taxpayers’ money as well. It’s good to see that the court has protected the right of government to recover outstanding spectrum fees", Ameet Datta, partner at law firm Saikrishna and Associates.