YouTube emerges as new stream of revenue for film-makers

YouTube emerges as new stream of revenue for film-makers

New Delhi: YouTube could become a showcase for Bollywood movies if Studio 18’s experiment with its latest film Striker catches on. The film, set in a 1980s Mumbai ghetto, was released simultaneously on the website in all countries except India and Pakistan. 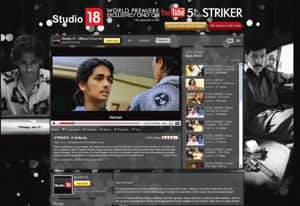 Movie showcase: A grab showing Striker on Studio 18’s channel on YouTube. The film has been simultaneously released on the website.

Producers either share advertising revenue with YouTube or get viewers to pay a fee, as with Striker, which is available to US-based viewers at $4.99 (Rs230).

“The response for Striker has been extremely positive—the movie already has 7.67 lakh hits and it is expected to go further," said Gautam Anand, director, content partnerships, Asia-Pacific, at Google Inc., which owns YouTube.

“Advertisers who are keen to reach out to the Indian diaspora abroad are very excited about the opportunity but these are still early days, and we are focusing on offering users the best streaming experience," Anand said.

The Aamir Khan-starrer 3 Idiots is also expected to be available on YouTube soon, according to producer Vidhu Vinod Chopra.

As far as the domestic market is concerned, low broadband penetration and lack of infrastructure are challenges for advertisers. While digital media falls in the top bracket for media buyers, they are yet to take up YouTube as a serious advertising option.

“The streaming capability in India is very low, therefore, YouTube as a medium for advertising has not picked up as yet," said Sai Nagesh, chief operating officer, Dentsu Media India. “It is, however, an excellent medium to create curiosity among the NRI (non-resident Indian) audience, but for it to pick up in India, it will still take some time."

Tarun Deep Kumar, executive director, India North and Pakistan, Starcom Mediavest Group, agrees that the avenue makes more sense for overseas markets. “None of our clients have come up yet asking about YouTube," he said. “However, for clients with an NRI focus, it could be considered."

“There are many ways of illegally posting full-length movies online. So we are trying to go one step ahead of the pirates and providing these movies online for free or a nominal amount and, in turn, earning revenue from a medium that at one time was a rival," Bhargava said.

“Since we have just started working with long-form Bollywood content producers, the library currently has limited titles," Anand said. “But we are in talks with several content producers and you will be able to see a lot of new titles being added to the library, both old and new."

Producers sense an opportunity in being able to monetize their back catalogue. Film-makers such as Shemaroo Entertainment Pvt. Ltd, Rajshri Productions Pvt. Ltd and Ultra Distributors Pvt. Ltd have already tied up with YouTube to make their movie content available online.

“New films are obviously the drivers of business but at the end of the day old movies have higher shelf life," said Hiren Gada, director, Shemaroo Entertainment. “The YouTube platform is still at a nascent stage and only provides a fraction of our revenue; so we are just testing the waters now and have uploaded about 10-12 movies."

“We are very excited about the response we have got for old popular Bollywood movies and we will continue to work with our partners to make more such movies available on YouTube," Anand said. “With a global distribution platform like YouTube and success of Striker, we are confident that more content producers will be encouraged to partner with us."

Online video could become a key revenue source as more users take to the medium.

“Interestingly enough, Google runs a version of Adsense (which serves up advertisements) that pays film copyright owners a share of advertising revenue even when someone else has uploaded the video," said Gulshan Verma, digital segment champion, media and entertainment practice, Ernst and Young. “Given the amount of Indian content on YouTube, this could be significant over time."

“We have seen online video advertising rates in India at Rs350-450 per 1,000 impressions or hits," he said. “This is four-five times higher than traditional display advertising and in some cases comparable to search engine advertising."