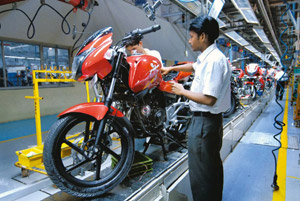 “The performance is the best in the company’s history," chief financial officer Kevin D’sa said.

The earnings took analysts by surprise, beating a Mint poll of five analysts who had projected net profit of Rs458 crore.

“I am really impressed by the margins," said Umesh Karne, an analyst at Mumbai-based brokerage Brics Securities Ltd. Karne was not among the analysts Mint had polled in its earnings preview earlier this week.

Bajaj Auto shares on Tuesday closed 1.77% higher at Rs1,698.10 on the Bombay Stock Exchange while the bellwether index, the Sensex, fell 0.59% to 17,422.51 points. The quarterly results were released after the markets closed.

Bajaj’s materials cost as percentage of operating income rose from 66.2% in the three months ended 30 September to 68.5% in the December quarter.

In a 7 January report, CLSA Asia Pacific had said that raw material contracts of most auto companies would start being re-priced from the third quarter of fiscal 2010 due to rising metal prices.

Indian steel makers, led by the country’s largest, Tata Steel Ltd, have increased spot-market prices of auto- and appliance-grade steel by as much as Rs1,500 a tonne early in the new year.

Prices of rubber, aluminium and copper have also risen 15%, 13% and 23%, respectively, in the quarter ended December sequentially. Rubber prices have risen 29.6% from Rs138 to Rs140 a kg over the preceding quarter.

However, a strategy of focusing on sportier and bigger bikes has helped Bajaj improve market share without compromising on margins, the company said in a statement.

Higher volumes, which brought down fixed costs, along with effective cost management, helped it maintain the margins, it said.

Helped by brisk sales of its Discover DTS-I motorcycle, of which 350,000 units have been sold since 1 April, Pulsar 135cc, which has been averaging 50,000 units a month, and a greater contribution of higher powered motorcycles, Bajaj has been able to offset increased costs to guard its margins.

“They have been offset by the operating leverage," he said, adding that he expects the volumes momentum to continue. “It doesn’t look like the volumes will come off the peak."

In the 75-250cc range, Bajaj sold 21,65,591 motorcycles in the December quarter, a growth of 35% over the same period in 2008, according to data from industry lobby group Society of Indian Automobile Manufacturers.

Volumes have also been helped by exports, which account for one-third of Bajaj’s production.

In the December quarter, the company exported 273,902 units, or 33% of its volume. The two-wheeler maker in December announced that it was exiting the scooter segment, in which it was once an iconic company, and, currently, has only one product in that category.

Kaushal Maru, an analyst at Religare Capital Markets Ltd, said he expects the company to gain market share at the cost of Hero Honda. “While Hero Honda will continue the good run, the growth at Bajaj will be faster," he said but declined to give any numbers.