HCL will use $1.475 billion of its own cash and borrow $300 million to finance the transaction, which the management expects to close by mid-2019.

New Delhi: HCL Technologies Ltd will spend $1.78 billion to buy eight software products from International Business Machines Corp. (IBM), it announced on Friday, unveiling the single-largest acquisition by an Indian information technology (IT) services company and a buyout that is unlike any made by risk-averse home-grown IT firms.

Significantly, the development implies that the billionaire Shiv Nadar-led HCL Tech is making its boldest bet on selling proprietary products and services, as the Noida-based company has spent a total of $3.02 billion in building up its software product business since the firm stitched its first intellectual property (IP) partnership in August 2016.

According to chief executive officer (CEO) C. Vijayakumar, HCL has in the last 28 months spent $1.25 billion in licensing IPs from companies such as IBM and DXC Technology Co, and then building products around them. 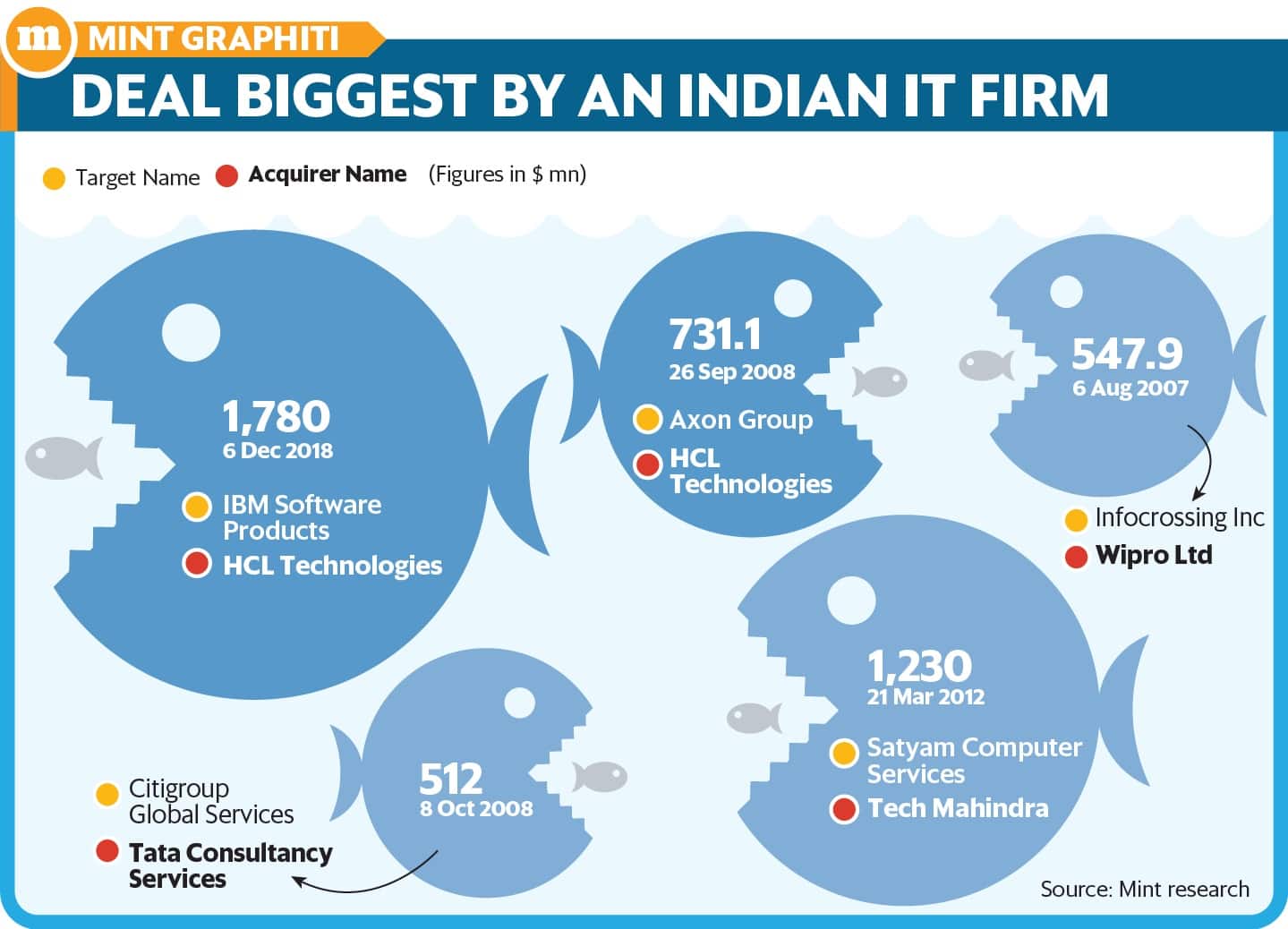 Under the all-cash deal, HCL will use $1.475 billion of its own cash and borrow $300 million to finance the transaction, which the management expects to close by mid-2019.

HCL expects that the eight software products, such as IBM Notes, Domino and Appscan, will help it garner $625 million in incremental revenue in the 12 months after completion of the deal. In a presentation made to analysts, HCL said these products have a market size of $110 billion and that five of them are notching up double-digit growth.

HCL’s acquisition strategy contrasts that of its rivals in three important ways.

First, its investments are in software products while rivals such as Tata Consultancy Services Ltd, Infosys Ltd and Wipro Ltd continue to strengthen their presence in digital such as buying design studios.

“The $1.8bn deal by HCLT of IBM product is unlike others, given it marks a foray into software with serious capital commitment," Kunal Tayal of Bank of America Merrill Lynch wrote in a note on Friday.

Second, there’s the size of the deal. Indian IT firms, true to their DNA, have shied away from spending more than $600 million on any one acquisition.

Finally, HCL continues to be reticent about the details of this transaction and its entire IP partnership. A case in point: The management declines to comment on how much revenue the company has recorded from having spent $1.25 billion in the past on IP partnerships. This, too, is unlike the acquisitions made by its rivals. The HCL management did not even hold a conference call with the media after it announced the acquisition.

Understandably, some analysts were sceptical.

“An aggressive strategy on M&A (mergers and acquisitions) could be construed as a lack of any material acceleration in organic business in the near term," Morgan Stanley analysts Parag Gupta and Gaurav Rateria wrote in a note.

“Revenue sustenance in such deals remains a worry," Diviya Nagarajan, an analyst at UBS Securities, wrote in a note to investors.

HCL Technologies, which reported 12.4% growth to end with $7.84 billion in revenue last year, surpassed Wipro Ltd to become India’s third-biggest software services provider in the three months to 30 June, marking the first change in the pecking order of the country’s $167 billion IT outsourcing industry in six years. The company expects to grow its dollar revenue by, at best, 10.4% in the current fiscal.

“The software industry is close to $120 billion. We have barely scratched the surface. Just like we found our way to drive growth in the infrastructure maintenance business over the last 10 years, I see growth in IP and product business across very similar lines. There is very little presence of Indian origin players in true software products business," Vijayakumar said after the company declared its second quarter earnings on 23 October. “Any forward-looking company should look to better utilize cash that they have to redefine themselves in the long term. We are in good shape."

Investors though, will need some convincing.

Since the start of the year, HCL shares have lagged the broader IT index: From 1 January until 7 December, the BSE IT Index returned 27.75%, as against only a 8% return for HCL shareholders.