Mumbai / Hyderabad / New Delhi: Famed deal maker Nimesh N. Kampani has swooped in with a personal investment, potentially valued at around Rs1,200 crore, allowing Ushodaya Enterprises Ltd, publisher of Eenadu, the largest selling Telugu newspaper, to walk away from a stalled year-long effort to sell a 26% stake to Blackstone Group for $275 million, or about Rs1,080 crore.

The complicatedly structured transaction, which was confirmed by two people familiar with the matter, includes debt and equity, and comes ahead of a crucial Supreme Court hearing, tentatively scheduled for 8 February, for Ushodaya’s principal promoter, embattled entrepreneur Ramoji Rao, who is battling the Andhra Pradesh government in court over issues related to repaying disputed public deposits accepted by Margadarsi Financiers, a company owned by Rao and his family. Without the new cash infusion, Rao would have been on the defensive in his efforts to try and block an attempt by the state government to attach assets of his companies.

Rao and his family own 99.86% of Ushodaya and had, until recently, hoped to use proceeds from the Blackstone deal, which would have been the largest private equity deal in Indian print media, along with other funds, to pay back the depositors.

But Blackstone’s proposal became mired in the old political and emerging business rivalry between Rao and Y.S. Rajasekhara Reddy, the Congress chief minister of Andhra Pradesh. Leading the campaign against the deal was Aruna Kumar Vundavalli, a Congress member of Parliament from the state’s Rajahmundry constituency, who wrote letters to multiple ministries, especially the finance ministry, asking it to reject the deal on various grounds. 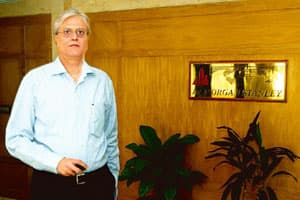 Trying to salvage any deal, Blackstone scaled back the proposal. That revised proposal was then cleared by the board in January, but has since been held up by the finance minister. Mint first reported the Blackstone saga on 7 January.

The Kampani investment is being made through Equator Trading Enterprises Pvt. Ltd, a so-called special purpose vehicle that is privately owned by Kampani, chairman of JM Financial Ltd, a publicly traded integrated financial services group.

Equator was incorporated on 7 January with an authorized capital of Rs27 crore and a paid-up capital of Rs100,000. Kampani has since infused Rs200 crore capital into the new firm early this week.

People familiar with the matter said Equator was specifically created for the Ushodaya investment and it is likely that Kampani might not hold on to the investment. It is unclear how much stake Equator has picked up in Ushodaya.

“It is a very complex deal that has both put and call options, allowing both Kampani and Ushodaya promoters to get out," said one person. “It is part equity and part debt and Kampani has the right to sell off the equity to a third party. He is an investment banker and will look for opportunities (to profit). It all depends on how profitable the group is."

Kampani is not believed to be investing on behalf on others, at least at this stage. Kampani and his family hold a 26.92% stake in JM Financial. Last year, he severed a decade-old tie-up with Morgan Stanley, selling JM Financial’s 49% stake in an institutional brokerage business for $445 million.

The Blackstone-Ushodaya deal had a 31 January deadline but the US private equity firm had privately hoped it could yet convince Rao to consummate a transaction if the government approved its lowered deal.

Rao’s Eenadu group is well regarded in Andhra Pradesh and faces imminent competition from a new newspaper being started by the son of chief minister Reddy, who also wields significant clout at the Centre and is key to the Congress government’s re-election chances in 2009.