Except for a blip during the recession years, corporate India has been bullish on outbound M&A deals since liberalization

In the 25 years since liberalization, Indian companies have consistently directed their gaze at the global business stage. The top 10 business groups in India have experienced an average increase of about 26 percentage points in their share of international revenue in the last 10 years, the most noteworthy being Tata Motors Ltd, Hindalco Industries Ltd and Tata Steel Ltd. Many big firms in India earn more than two-thirds of their revenues from abroad.

India Inc. flexes its M&A muscle in the global arena

India Inc.’s appetite for acquisitions is reflected in the nearly 2,000 outbound merger and acquisition (M&A) deals since liberalization in 1991. From the golden years of 2005–2007, replete with blockbuster deals totalling nearly $41 billion, to a more cautious approach in the recent post-recession era, Indian firms have shown a keenness for overseas acquisitions.

The government increased the outbound investment cap from $15 million in 1999 to four times a company’s net worth in 2007, while also permitting companies to invest in unrelated businesses.

Another key factor was the availability of cheap finance as base interest rates fell. Debt financing for outbound deals was eased, and permission to use external commercial borrowing granted from 2005 onwards. During 2003–2007, domestic businesses grew much faster (at nearly 20-25%) than the gross domestic product (GDP), and profit after tax grew at a staggering 41%. Armed with sizeable cash reserves and hungry to make acquisitions in new markets, India firms went through a phase of intense cross-border expansion. During the high-octane period of 2005-2007, Indian companies concluded a string of large deals, among them the nearly $13 billion Tata-Corus tie-up and Hindalco’s nearly $6 billion acquisition of Novelis Inc. This period was marked by outbound M&A galloping at a brisk compounded annual growth rate of 130%.

The global economic slowdown checked outbound M&A activity and led to a more cautious approach. Barring a few exceptions, such as Bharti Airtel Ltd’s acquisition of Zain Africa BV in a $10.7 billion deal in 2010 and a recent resurgence in M&A activity since 2014, many companies chose to look back inward at domestic M&A.

A few key characteristics define corporate India’s engagement with outbound M&A over the past 20 years. For instance, while deals of less than $25 million comprised more than half the transactions that took place between 1995 and 2015, the volume percentage of low-value deals worth under $10 million dropped between 2000 and 2015. However, the median deal size more than doubled from about $9 million over 2000–2005 period to nearly $22 million during 2010–2015, signifying a shift to higher value deals.

Another notable feature was that experienced acquirers, those who had concluded more than three deals in the last 20 years, were responsible for over half the transactions and nearly 70% of deal value in the 1995–2015 period. Our experience shows that such acquirers go through a learning curve that helps them build a replicable M&A strategy.

Among the key sectors that drove a majority of these deals were IT/ITeS, healthcare, automotive and natural resources (mining, oil and gas). Collectively, these sectors accounted for nearly 40–50% of all outbound transactions during 1995–2015. Typically, the motivations for increased M&A across these sectors centred on accessing new markets, customers and geographies as well as expanding product and service portfolios. 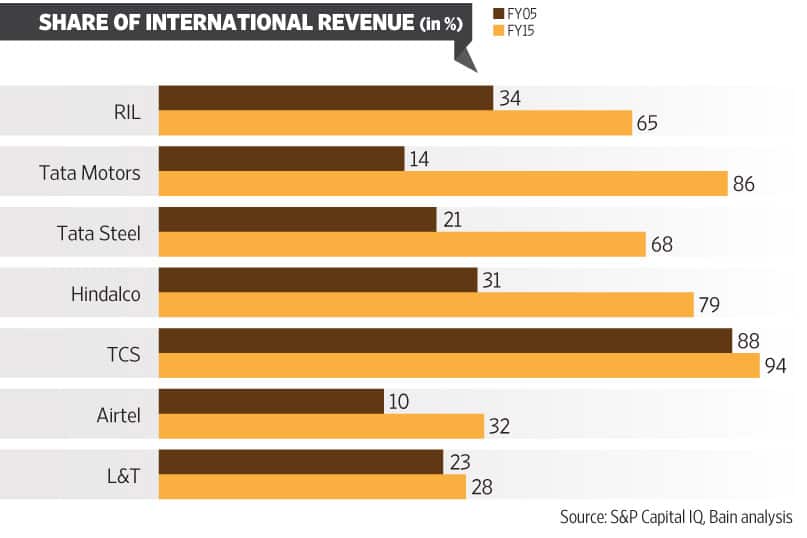 In a highly competitive global environment, Indian IT companies used M&A strategically to consolidate their presence in important overseas markets, strengthen technological pipelines and boost their scale of operations.

Another big spender on overseas acquisitions was the fast-growing, cash-rich healthcare sector. Indian pharmaceutical companies favoured M&A as a means to bridge the gap between their capabilities at the lower end of the pharma value chain with the front-end competencies of the acquired companies. In many cases, overseas acquisitions were also seen as a route to overcome high- entry barriers, particularly regulatory hurdles, in major foreign healthcare markets. 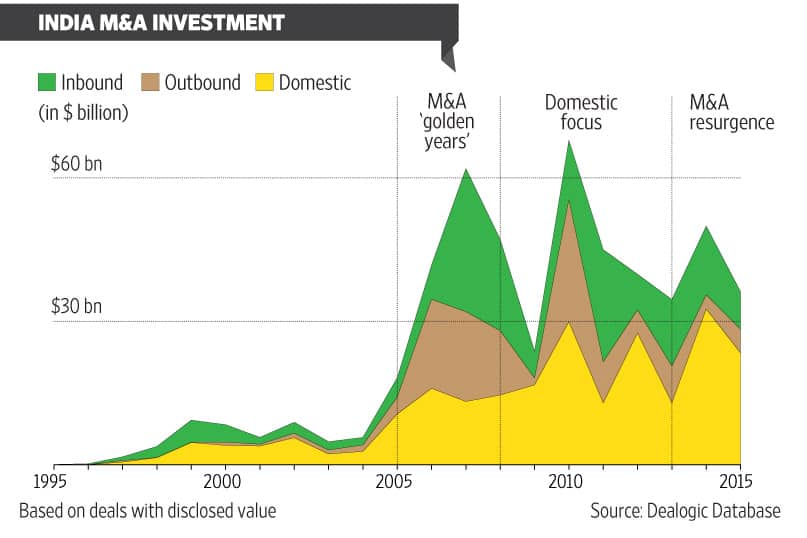 Indian mining companies, on the other hand, focused on overseas purchases to gain new markets, customers and mining assets.

In buying Novelis, for instance, Hindalco gained access to the former’s high-profile customers, including Ford and The Coca-Cola Co., while Lanco Infratech Ltd’s acquisition of Griffin Coal has been pivotal to boosting production capacity and ramping up scale by gaining access to overseas assets.

Across commodity markets, securing access to raw materials and natural resources is critical, a fact highlighted by Oil and Natural Gas Corp. Ltd’s (ONGC) oil exploration acquisitions in more than 15 countries during 1995-2015.

Many Indian companies, particularly during the global economic slowdown, proved successful in identifying and then turning around the performance of distressed assets. One of the most prominent examples of this was automotive components manufacturer Motherson Sumi Systems Ltd. From 2003 to 2013, it made nine acquisitions and built its reputation on the back of acquiring and then reviving the fortunes of Visiocorp, the UK-based automotive rear-view mirror manufacturer that used to supply to companies such as Bayerische Motoren Werke AG (BMW) and JLR.

But not all deals hit the mark

However, Indian firms’ record with outbound M&A has been mixed. Bain & Co. analysis shows that out of the top 15 deals over the last decade, only 33% generated positive excess returns over the Sensex in the 13-month period following the deal announcements. Moreover, only a third of these yielded shareholder returns of more than 10%.

In our experience, there are three things that potential acquirers need to get right in order to complete successful acquisitions. The first is to develop a good investment thesis and run a thorough diligence process to test the thesis. If not done right, this can result in a failure to capture incremental value. The second is to tackle talent and cultural challenges, which, if not addressed, can lead to loss of critical people during integration.

Lastly, the integration process should be simple and receive the backing of the leadership, failing which poor decision- making would break down the process.

The high point of 2005-2007 was predicated on a confluence of several positive factors, including strong domestic cash flows, dynamic global demand, availability of cheap finance and a robust currency. Although these forces are unlikely to come together again in the short- to medium-term, Indian companies are projected to continue pursuing M&A opportunities, primarily to access new markets or upgrade technology.

Metal forging, aluminium, chemicals, household electric parts, auto ancillaries and two-wheelers are among a range of low-tech industries that are likely to be high on opportunities in the near term. These low-tech industries will look to new markets to widen their distribution footprint and to take over any distressed assets and turn them around. Latin American and East European markets will be the focal points of the firms in these industries.

High-tech industries, such as IT and pharma, will find opportunities in the US and western European markets, but these will likely play out over a longer time horizon. The focus for these sectors will be to gain access to intellectual property and to customers in developed markets.

As India Inc.’s balance sheet strengthens, outbound M&A will be an important imperative for growth. To win, Indian companies need to make M&A an extension of their growth strategy and start building M&A capabilities ahead of time.

Sri Rajan is chairman, Bain & Co., India. Shyam Unnikrishnan is a manager in the firm and a member of the Strategy and Consumer Products and Retail practices in India.

Next week: The rollercoaster of private capital