Noida: It is about 4pm, the lane outside Amity University is packed with students’ cars, tiny Marutis to shiny four-wheel drives.

Inside the sprawling campus, almost a mini-city in itself, Atul Chauhan, 35, sits in his new office behind a desk dominated by four computer monitors. Each displays coloured line graphs and bar charts—data on the education empire set up by his father, Ashok Chauhan, which includes playschools, regular schools, graduate schools and this university. 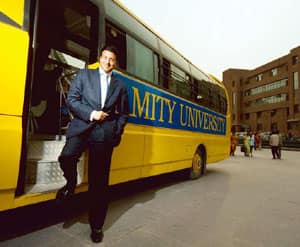 The multiple screens and the programmes they list before Chauhan symbolize Amity’s journey from a backyard college with 120 students about 13 years ago to a private university created by a legislation passed by the Uttar Pradesh assembly. On an average day, this three-year-old university in the suburb of New Delhi sees 200 students lining up for admission to classrooms filled with aspiration, fuelling the education boom.

And yet so great has become the hunger for education in India that Amity and the Chauhans still manage to lure students. In many ways, their success is rooted in the failure of state-run universities to keep pace with the demand for education and the arrival of a new breed of students who are willing and able to pay more for degrees that long have been subsidized.

“Amity admissions are very, very hi-tech. We get all the statistics," Chauhan said, changing the graphs on the screen. “This year we have so far interviewed 8,000, we have 120,000 applying. I can even see how many calls came—how the call centre is functioning. Last one month, 122,000 students have taken the career test".

The career test on Amity’s website asks questions to judge a personality type, and suggests career options for individuals taking the test. (This reporter, for instance, was found to be “highly principled" but “dislikes dealing with details", making her better suited for jobs in counselling, music, art and medicine.)

Jeans-clad students mill outside Chauhan’s office, as if to physically embody the statistics. On the porch, young people form a riot of colour—sitting on steps, in groups and huddles. The university offers 130 programmes, from fine arts to nanotechnology, microbial science to rural management. The rush of students also stems from the fact that Amity advertises—it spends a few crore annually on ads and marketing—something state-run universities and top-tier schools simply do not do.

“Amity advertises pretty heavily. I was in Zambia and my parents came across this advertisement. I wanted to study in India and nothing else was coming up, Amity was just there," said Ritika Passi, a 20-year-old pursuing a bachelor’s degree in journalism at Amity University. She lived in the hostel on campus for a year, paying Rs1.2 lakh annually, plus Rs45,000 as hostel fees, but moved out to live with her parents who are in India now.

Another student in the same programme admits he chose the university by default because his board examination scores were low. “My marks weren’t very high to apply to Delhi University," said Ankur Agha, 20.

It is this expansion of the higher education market to accommodate greater numbers that Amity has exploited. In a country where only 11.6% people in the age group of 18-24 get enrolled in a college, a mid-March report from brokerage house CLSA Asia Pacific estimates that students would spend $40 billion (Rs1.7 trillion) on education in 2008. The report predicts that this figure would touch $68 billion by 2012. A big chunk of this—$7 billion—will be spent on private professional colleges.

The road for the Chauhans—first father Ashok, and now son Atul—has required them to pull out political connections and move court in a highly publicized scrap with AICTE, the controversial regulator for private colleges. In 2005, the regulator cancelled Amity’s licence to offer a postgraduation course in business, a development which made headlines.

Chauhan is reluctant to speak about the spat. According to online youth magazine Jam, which reported on the incident, students had moved court asking Amity to refund fees as it no longer had the regulator’s approval.

Jam, which also rates colleges, had sent a reporter to the old Amity campus, different from the one that now houses the private university, in December 2005. In an account later verified to Mint by Jam editor Rashmi Bansal, the reporter found different courses being conducted in the same building. For instance, a wing on one floor that was meant for Bachelor of Business Administration, or BBA, classes (as indicated by a large signboard) had many different types of MBA classes going on. Class 3 schoolchildren from the Amity International School were being taught in classrooms that still had MBA (General) printed on the door. The Amity Business School classes, which are supposed to be held in the D and H blocks, were instead being held in J block belonging to Amity International School.

Thus, it appeared, AICTE was accurate in observing facilities and infrastructure intended for AICTE-approved courses were being utilized for other unapproved courses.

But, observers say this is the way a number of private colleges start operations in India. They share land and buildings, which require heavy spending, with a school or with another college before their brand gets established. This is something the regulatory body considers illegal.

The Chauhans, who launched a long court battle against AICTE, remember the period as painful.

“We have moved on," says Chauhan, referring to Amity University’s current status as a 60-acre private university, among just 15 other private universities in India. Neither Jam’s Bansal nor her reporters have visited the new location of the university.

The Chauhan family, which includes younger brother Aseem Chauhan and their mother, runs the university through a charitable trust, which according to Indian laws is not allowed to make any profit.

Chauhan says the family sticks to this rule, but their wealth is clear. The 32-member family includes Ashok Chauhan’s brothers—he was born into a family of seven siblings—and Atul’s young cousins and their children. Together, they own a row of houses in Defence Colony, one of New Delhi’s posh neighbourhoods. They are known to be very religious, beginning their day with a family puja.

Chauhan, an alumnus of the London School of Economics and University College, said even as the family settled in Germany in the 1980s, his father dreamed about setting-up schools and colleges in India. After graduating from Meerut University, now called Choudhary Charan Singh University, Ashok Chauhan had moved to Germany in the early 1970s on a scholarship of the German government.

“We were children, we were sitting on the bed and it was snowing outside, when he told us. He keeps diaries. He even made us think of a name and finally wrote down Amity," said Chauhan referring to his father.

Ashok Chauhan declined to meet with Mint. He remains an elusive and controversial figure, with charges still pending against him in Germany, where he ran a plastics and petrochemicals business.

In an email interview with Mint, Doris Möller-Scheu, a spokeswoman for the prosecutor in Frankfurt, confirmed that Ashok Chauhan was charged with fraud in 2000.

“He is suspected of having given five promissory notes as a security in order to obtain a credit of €1.5 million (about Rs10 crore at the current exchange rate) from two banks in 1994. Later these promissory notes were dishonoured, because the drawees were insolvent," she said, adding that the prosecutor’s office in Frankfurt sought his extradition from India. But the Delhi high court rejected the request in 2005.

Son Chauhan terms the charges as small. He says they have been but blown out of proportion by people who want to blackmail and extort money from the Amity Group. He, however, did not say who these people are.

Despite the questions, observers say the Chauhans’ mark on the growth of private education in India is undeniable.

“The dark side exists but he (Ashok Chauhan) has put money in education," said Premchand Palety, who heads the Centre for Forecasting and Research, an organization which rates business schools. Palety also writes an education column for Mint. “Amity Law School is respected. Their business school at one time went very high because of a good dean. They charge very high fees but placements are above average. The engineering schools are average."

Students, and faculty, say the university is changing rapidly—and mostly for the better. “Teaching could be better but some teachers were excellent," said Dipanjan Banerjee, 23, a 2008 batch student of Amity’s two-year management programme in marketing. Banerjee was recruited on-campus by Satyam Computer Services Ltd, the country’s fourth biggest software services provider by revenue.

One of the teachers who left a favourable impression on him, Mamta Mohan, the leader of the programme, gets paid Rs60,000 a month; a component of it—Rs20,000—is variable and is paid to Mohan for her extra work in designing syllabi for new programmes, such as the one on retail.

“Our faculty are a mix of those from other institutes, plus from corporate sector. Recently, I got a CV for a teaching post from a young man who is in sales and is 2005 batch (graduate) from IIM-Bangalore," said Mohan, who has been with Amity for six years.

With its brand steadily attracting students, Amity now plans campuses overseas—in the US, the UK, Mauritius, Singapore and Dubai. “We can give students option of doing one semester in Singapore," says Chauhan. “These days education is global so they need to give them a global experience."

(Education Czars: A Mint Series on the New Entrepreneurs will continue over the next few months and the profiles will also be available online at www.livemint.com/eczars.htm

As always, we welcome your suggestions of businesses and people to profile in this series. Do write to us atfeedback@livemint.com)

The article made a generalized claim on the quality of students enrolling at Amity that cannot be substantiated. It has been rewritten to leave out this mention. A Frankfurt court has also ruled that there are no crimincal proceedings against Chauhan and that the arrest warrant issued has been revoked.