With the $2.6 billion Flipkart funding, SoftBank has bought its way out of a corner, and might have financed Tiger Global Management's escape too

Less than three years later, the rivalry between the two has become an alliance of sorts. On the face of it, Tiger Global, led by the secretive fund manager Lee Fixel, seems to have got the better of its Japanese rival, but in truth, analysts say, there are no winners (or losers).

Indeed, over the past 18 months, both Tiger Global and SoftBank have seen their bets falter badly.

Snapdeal lost out for good to Flipkart and Amazon India, prompting SoftBank to wash its hands of the Delhi-based company, which until May was its biggest bet in India (its total investment in Jasper was around $900 million). SoftBank tried to arrange the sale of Snapdeal to Flipkart but that deal collapsed last week. 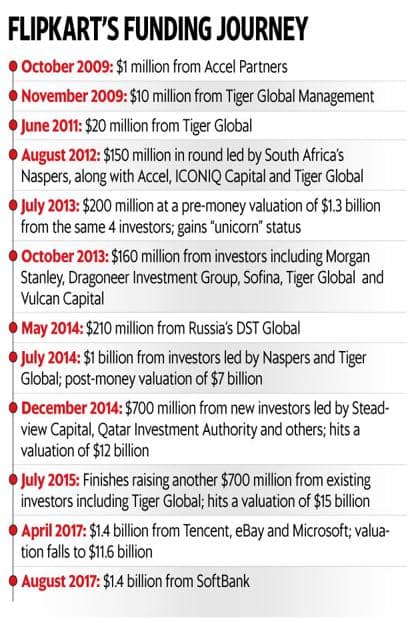 Fixel had staked his reputation on Flipkart, investing as much as $1 billion in the online retailer. But because of widening losses, stagnating sales growth and market share wins by Amazon India, many of Flipkart’s own investors had marked down its $15 billion valuation last year.

Flipkart finally clinched a fund raise in April at a valuation of $11.6 billion after it saw a resurgence in sales late last year. It was clear that Fixel’s hopes of a $50-100 billion share sale by Flipkart in future wouldn’t materialise, say analysts, leaving his $1 billion bet precariously placed.

On Thursday, SoftBank Vision Fund agreed to invest roughly $1.4 billion in Flipkart and buy Flipkart shares worth $1.2-1.4 billion, most of them from Tiger Global.

SoftBank has bought its way out of a corner, and it might have financed Tiger Global’s escape too.

Tiger Global will have to now share control with SoftBank on Flipkart’s board.

Until the end of last year, Tiger Global and SoftBank were the biggest and the most influential start-up investors in the country.

Both had invested roughly $2 billion in Internet companies here. But in the course of just three deals (Ola, Paytm and Flipkart) and nine months, SoftBank has tripled its start-up investments to more than $6 billion while Tiger Global has avoided investing more in India.

“Lee never looked at SoftBank as a rival, though even he was amazed by the speed at which SoftBank was making investments in 2014 and the check sizes they were writing. He thought of them as the late-stage (venture) capital (firms) that his companies could raise money from," said a venture capitalist who has co-invested with Fixel, on condition of anonymity.

In the end, Fixel was as eager as SoftBank for the latter to invest in Flipkart and give him some desperately needed returns, the analysts said.

“Lee has been very quiet in India from the end of 2015. He’s told all his portfolio companies that he is not going to lead any rounds. Obviously, India hasn’t worked as well as he thought. Now, his thinking is that let’s get money out before investing more," the venture capitalist cited above said.

Tiger Global and SoftBank declined to comment for this story.