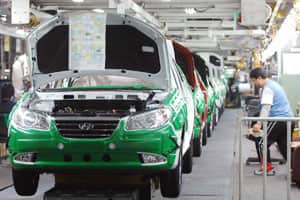 That was up from a 2.31 trillion won net profit a year ago and up from 2.45 trillion won in the first quarter.

Hyundai has offered stylish, affordable, feature-rich vehicles in the United States and other markets, helped by a weaker won against the dollar this year and South Korea’s free trade deal with Europe.

But concerns about the global economy and labour tension over an annual wage deal have pulled down Hyundai Motor shares by about 18 percent since May.