Mumbai: Small, regional food companies such as the family-owned Mapro Foods Pvt. Ltd, known for its jams and squashes, and Desai Brothers Ltd, the owner of Mother’s Recipe pickles and rice mixes, are eyeing small and medium-size food companies to expand their businesses.

Mapro and Desai Brothers, both based in Maharashtra, are in talks with investment bankers to identify and buy smaller food companies.

“We are planning to buy small, regional companies that have the potential but are unable to scale up their business in areas of vegetarian healthy food," said Mayur Vora, managing director, Mapro Foods.

“We are looking at companies with revenues of ₹ 30-50 crore," said Vora. “The funds for the acquisitions will come from its bankers and internal accruals and not through divestments."

Mapro, which sells its products in 11 states, had a revenue of about ₹ 100 crore in fiscal 2012. An acquisition will give it access to new products, said Vora, declining to share the company’s profit numbers as it is privately held.

Mapro has hired investment bank NM Rothschild and Sons (India) Pvt. Ltd to advise it on the deal, Vora said on the sidelines of the two-day Confederation of Indian Industries Food and Bev Tech 2012 summit in Mumbai that ended Thursday. 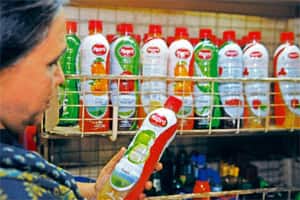 Testing waters: Mapro products at a store in Mumbai. Regional companies such as Mapro have engaged i-bankers to identify and buy smaller firms. Hemant Mishra

“We are exploring inorganic growth in the processed foods space, excluding dairy and non-vegetarian," said chief operating officer Treman Ahluwalia. Desai Brothers has been approached by investment banks for deals with smaller food companies, he said.

Desai Brothers made more than ₹ 1,000 crore in revenue in fiscal 2012. Its Mother’s Recipe brand, which it acquired in 2002 and is now present across India and in 35 other countries, alone generated a revenue of more than ₹ 100 crore.

“There is a lot of interest from small and medium companies to grow inorganically as they hit the glass ceiling for growth and need new brands to enter into new categories," said Nandini Chopra, practice head, consumer and retail, KPMG Corporate Finance India. “However, there is a supply-side constraint as there aren’t that many companies available which are ready to sell out. Entrepreneurs prefer to raise money through private equity (PE) or IPO (initial public offerings of shares)."

Last year, India saw fewer mergers and acquisitions than in 2010 in the food, drink, consumer goods and retail sectors mainly as only a few companies were available for sale, resulting in high prices for them.

But companies worldwide are eager to grow, enter new markets and consolidate, and are preparing to come back strongly when confidence returns in 2012 and 2013, KPMG International said in a report.

This year, according to VCCEdge, only one PE deal has been struck with a food company—GEM India Advisors Ltd invested $2.82 million in Bakers Circle India Pvt. Ltd in February.

Large foreign and local companies, too, are interested in getting a bite of the high-growth Indian food market through acquisitions.

In June last year, the US-based spice and seasonings company McCormick and Co. Inc. bought an 85% stake in Delhi-based Kohinoor Foods Ltd for ₹ 520 crore—its third acquisition in the country.

“The acquisition allowed us to expand our portfolio of spices into packaged foods, which has a huge potential for growth given the demographics of the country and growing preference for convenience, quality and hygienic food," said Satish Rao, managing director of the joint venture Kohinoor Specialty Foods India Pvt. Ltd.

McCormik has been in India for over a decade through the acquisitions of AV Thomas Group, a supplier of ready-to-use spice ingredients, in 1994 and Eastern Condiments Pvt. Ltd, a spices and seasonings company, in 2010.

“Close to 35% of the Indian household spends is on food. This is a $330 billion market and will grow to be a $900 billion market by 2020," according to the India Food Processing Mission 2020 report published by Boston Consulting Group and the Federation of Indian Chambers of Commerce and Industry.