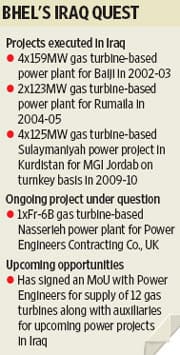 Bhel has a technology tie-up for gas turbines with GE, and with Germany’s Siemens AG for steam turbines.

“The contract requirements framed by the Iraq government clearly mentioned that the order could be placed with the technology owner (GE) or a licensee. Later they (Iraqi government) asked Power Engineers to place the order with GE," said a Bhel executive who did not want to be identified.

“Overseas orders have these kind of complications," another senior Bhel executive said, also on condition of anonymity.

US has a huge influence in Iraq after it invaded the oil-rich country in 2003 and dislodged the Saddam Hussain regime.

The latest development has raised concerns over Indian firms participating in reconstruction efforts in Iraq.

Bhel, India’s largest power generation equipment manufacturer, has undertaken other contracts in Iraq such as the 250MW Rumailla project, which involved the supply, supervision, engineering and construction of gas turbines, generators and auxiliaries as part of the United Nations oil-for-food programme.

The firm supplied a gas turbine-based power plant to the 500MW Sulaymaniyah project in Kurdistan and gas turbines for power projects in Baiji and Rumaila in Iraq as well.

It has also signed a memorandum of understanding with Power Engineers for supplying another 12 gas turbines for projects in Iraq. The gas turbines and associated equipment will be manufactured and supplied by Bhel’s Hyderabad plant and the control systems by its electronics division in Bangalore.

A team of Iraqi officials will visit Bhel’s facility in Hyderabad shortly so the firm can “showcase...that we have the capability to manufacture the equipment that have been contracted with us", said a third Bhel executive, who, too, didn’t want to be identified.

Though Iraq remains a flash point in West Asia with the US troops still battling insurgents, Bhel is keen on reconstruction contracts in one of the world’s largest oil producing nations.

“GE and Siemens can’t compete with Bhel on cost fronts. Since they (Bhel) will be facing competition in the domestic market, any increase in overseas orders will be welcome," said Madanagopal R., an equity research analyst at Centrum Broking Pvt. Ltd in Mumbai.

Bhel is looking abroad for contracts as it fears its domestic market share may decline to 50% in five years from the 60% now due to increasing competition from local and foreign companies.