Mumbai: Sequoia Capital has invested nearly $90 million across six deals in Indian pharmaceutical and healthcare firms over the past year as it continues to increase its exposure to the fast-growing sector.

The storied Silicon Valley-based venture capital (VC) firm has been the most active VC investor in the pharmaceutical sector during this year, according to Grant Thornton India Llp.

Data from VCCEdge, the financial research platform of VCCircle, shows that 2015 has been the most active year for Sequoia in terms of investments in pharmaceutical and healthcare firms by the number of deals and value.

Two of these deals got the government nod this week.

“We started looking at pharma in 2011. We scanned the environment and we came up with a list of companies we would like to invest in and over the last three-four years we have executed a good part of that strategy," said Abhay Pandey, managing director at Sequoia Capital India Advisors.

According to Pandey, the pharma sector in India is large, growing and profitable.

“There were several high-quality people who were moving out of big pharma firms and setting up their own meaningful and valuable businesses in pharma. Our business is about going after entrepreneurs who are targeting large markets and who can build large valuable businesses with small amount of capital," added Pandey. 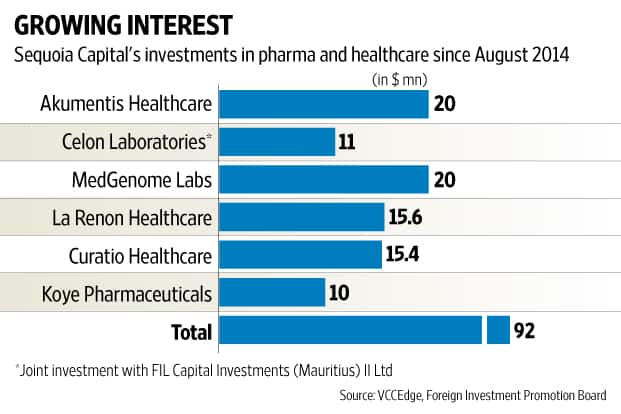 In July, Sequoia invested $20 million in MedGenome, a Bengaluru-based diagnostics and research services firm. MedGenome offers genomics-based diagnostics solutions to hospitals and doctors as well as genomic research services to pharmaceutical and biotech companies and academic research institutions in India. This and the investment in Akumentis Healthcare have been the biggest deals for Sequoia in this segment.

Akumentis, which was founded in 2010, focuses on niches in women’s healthcare— infertility management, gynaecology, obstetrics and osteoporosis treatment.

Niches are a recurring theme in Sequoia’s choices, an investment banker explained.

“Our understanding is that the fund has taken a decisive call to invest within the consistently rapid growing domestic formulations segment by backing mid-size companies that are growing at a rate faster then the market and focused on specific therapies/niche therapies of nephro, women’s care, anti allergy etc," said Shiraz Bugwadia, managing director at o3 Capital Global Advisory Pvt. Ltd, a mid-market focused investment banking firm

According to an August 2015 report by o3 Capital, the market for companies operating in the four key segments in the Indian pharmaceutical sector—formulations, active pharmaceutical ingredients, CRAMS (contract research and manufacturing services) and biosimilars—is pegged at $44.6 billion.

“Sequoia has always had a strong eye for healthcare and pharma. Healthcare is a sector which it understands very well and it invests very actively in that space. Its portfolio is very diverse, with hospitals as well as pharma firms," said an investment banker who has advised Sequoia in one of the transactions and asked not to be identified.

The firm was an early investor in Vasan Healthcare Pvt. Ltd, which runs around 180 Vasan Eye Care hospitals across India.

Sequoia is not the only fund increasing its exposure to the sector. Late stage private equity investors have been equally active. For instance, Singapore’s state-run investment firm Temasek Holdings Pte Ltd had invested $600 million in the sector for the six months till April 2015.

Investors have also seen profitable exits from their investments in pharmaceutical and healthcare firms. In November 2014, ChrysCapital sold 10.16% in Ahmedabad-based Intas Pharmaceuticals Ltd to Temasek for ₹ 880 crore, Mint reported at the time. In May 2015, ChrysCapital sold its investment in Mankind Pharma to Capital International Private Equity Funds at nearly ten times its original investment, Mint reported.

“Domestic formulations is an area where private equity and venture capital investments will grow over time. The level of interest in pharma is expected to increase further with ease in applications and ease in approval processes," the unnamed investment banker added.

This year has also been Sequoia’s busiest year in terms of investments in the last five years.

According to VCCEdge, the firm has invested $212.03 million across 42 deals since January, with $143.93 million invested in e-commerce and consumer Internet companies. In calendar year 2014, the Menlo Park-headquartered firm deployed $82.04 million across 35 deals.