How Blackstone turned India into its most profitable market

Mumbai: Blackstone Group LP says it’s found the formula for making money in India, which has become its top-performing market globally after the firm began focusing on bigger buyout deals.

Over the past few years, Blackstone has started concentrating on select sectors like consumer and information technology where it expects India to see the most wealth creation, according to senior managing director Amit Dixit. That shift, along with a preference for larger investment sizes, helped it generate returns as high as six times on recent exits in the country, a person with knowledge of the matter said. 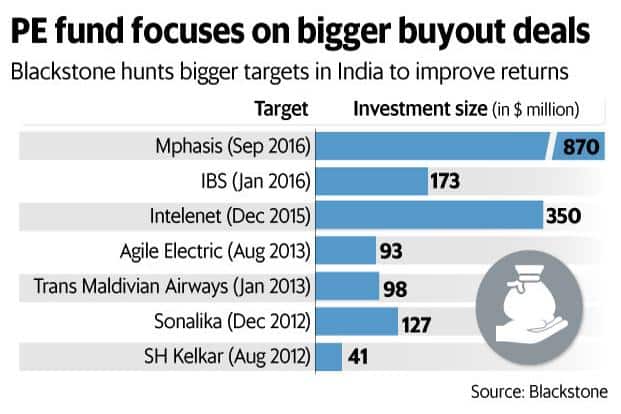 Blackstone recorded an annualized internal rate of return of about 30% on its India private equity investments since 2011, the highest among its markets worldwide, according to the person. It booked about 25% returns in China during the period, the person said, asking not to be identified because the information is private. India-focused funds of all vintages have seen median returns of 12.4%, according to Preqin Ltd.

“Limited partners always used to complain that it’s easy to invest in India and hard to get the money out," Dixit said in an interview at Blackstone’s office in Mumbai. “That has changed now—since 2014, there has been a good exit environment."

Blackstone, which earlier bought minority stakes in India, has decided it won’t be a passive investor, according to Dixit. Its strategy since 2011 has been to acquire majority stakes in Indian companies only in certain areas where it has “deep knowledge" like finance, health care and industrials, he said.

The results are beginning to show. Blackstone’s 2013 investment in Trans Maldivian Airways Pvt, whose seaplanes ferry tourists between islands in the Indian Ocean, generated a return of about 4.8 times, the person with knowledge of the matter said. Blackstone and its partners agreed in December to sell Trans Maldivian for $500 million to a consortium led by Bain Capital.

Blackstone earned a sixfold return on its investment in SH Kelkar & Co., which creates fragrances and flavours for customers including Unilever’s local arm, the person said. The buyout firm sold part of its holding in SH Kelkar’s 2015 initial public offering and offloaded more stock last year.

“The key to the recent success of the Blackstone team in India has been their ability to do control transactions in India, and have the confidence and ability to manage these companies," said Sanjay Agarwal, executive chairman of corporate finance at Deutsche Bank AG in India. “They have changed the narrative amongst private equity firms in India that you need local business families to be partners."

In 2016, Blackstone sealed its largest purchase yet in India. It spent about $870 million to buy control of Mphasis Ltd, a Bengaluru-based technology services provider, from Hewlett Packard Enterprise Co.

The buyout firm has started front-loading management and operational changes at its targets to improve returns. It brought on more than 20 Blackstone-owned businesses as customers for Indian technology companies in its portfolio like Mphasis, Intelenet Global Services Pvt and IBS Software Services Pvt, according to Dixit. It also helped them execute 14 follow-on acquisitions.

Blackstone, which has been operating in India since 2005, revamped its strategy after some early investments soured when it picked the wrong sectors and failed to plan for currency depreciation.

Its 2007 takeover of Gokaldas Exports Ltd got hit when much of the garment industry’s manufacturing base moved to Bangladesh and Vietnam. Blackstone eventually sold out at a 79% loss. It also invested in Monnet Ispat & Energy Ltd, a steelmaker that has now become insolvent.

“We were new to India, and we were learning," Dixit said. “The private equity sector was finding its feet in the country."

Blackstone’s private equity funds have now invested a total of $3.5 billion in India. The firm is planning to add another $2 billion of such investments in the country over the next five years, Dixit said.

Its Tactical Opportunities fund acquired a stake last year in an Indian asset reconstruction company that buys bad loans. Blackstone is also looking at insolvent firms put up for sale under the new bankruptcy law that took effect in December 2016, he said.

At the turn of the century, many Indian industries weren’t fully open to foreign investment, and family-run businesses were wary of ceding control. Private equity has now become a “very important" source of funding for Indian companies’ growth, according to Sunil Sanghai, founder of NovaDhruva Capital Pvt. Blackstone has been successful in aligning its interests with portfolio company executives as well as finding the right time to sell, he said.

“In the past few years, the investment climate has certainly undergone a positive change," Sanghai said. “The private equity firms have also matured: they have seen a couple of investing cycles, and they now have experience with Indian companies and Indian management." Bloomberg