New Delhi: Auto companies are set to report a surge in earnings for the fiscal year ended March, boosted by resurgent sales and lower commodity prices.

The auto earnings season, which kicks off on 19 April with Hero Honda Motors Ltd reporting results, is likely to see four companies more than double profits, according to a Mint poll of five brokerages. 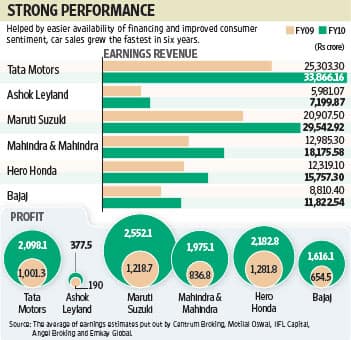 Auto makers benefited last fiscal from a revival in demand. Helped by easier availability of financing and improved consumer sentiment, car sales in India grew the fastest in six years in the fiscal year ended 31 March to 1,526,787 units, up 25%.

As a result, analysts forecast Maruti Suzuki India Ltd, the country’s largest car maker, to post a 41% increase in revenue to Rs29,542 crore.

The company has also gained through a strong showing in the export market. Exports more than doubled mainly due to demand for the A-Star hatchback in Europe. The company has a contract manufacturing arrangement with Nissan Motor Co. for the model.

Healthy demand for its Gio small truck is expected to help Mahindra and Mahindra Ltd more than double profit to Rs1,975 crore.

Another key contributor to increased profit will be the decline in raw material costs, which typically form as much as 20% of revenue.

Prices of steel and zinc, two key inputs, were lower than in fiscal 2009.

The industry’s performance may have peaked as it may become harder for companies to match the present rate of growth in the months to come.

The markets have given a thumbs down to auto stocks lately. The 14-share auto index on the Bombay Stock Exchange, which rose 67% last year, has risen barely 1% so far this year to 7,435 points.

Raw material prices have been rising and George says he’s building in margin contraction for all his stocks except Maruti Suzuki and Ashok Leyland Ltd. Still, Motilal Oswal also expects margins to moderate, but remain higher than the historical average that generally ranges between 11% and 13%.

Increased spending on infrastructure, particularly in highway construction, has prompted fleet operators to step up purchases.

Truck sales were the last to revive and analysts expect them to continue to remain strong in the first few months of this fiscal even as the growth in car and two-wheeler sales tapers off.

Analysts surveyed expect Ashok Leyland, which recently inaugurated its Uttarakhand facility, to post a profit almost double to Rs377 crore while that of rival Tata Motors Ltd is forecast at Rs2,098 crore. Tata Motors makes about two-thirds of its profit from truck sales and the revival in Jaguar Land Rover sales also bodes well for the company.

Both firms have also recently launched truck models based on new platforms that allow operators to order the entire vehicle and not just the chassis. This is likely to boost margins, according to analysts.

Hero Honda, which sold at least four million motorcycles and scooters last fiscal, is set to cross the Rs15,000 crore revenue mark, powered by rural demand. Sales in such areas account for four out of every six bikes the company sells.