How the Bajajs split and made up after 7 yrs

How the Bajajs split and made up after 7 yrs

Mumbai: The last day of 2008 saw the sudden and quiet resolution of the Bajaj family dispute, ending a fight in the third generation of a family business house founded in the 1930s that had begun just as suddenly seven years ago. 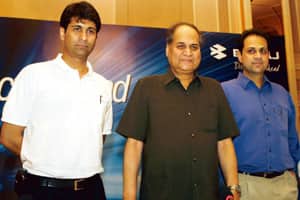 Rahul and Shishir are brothers and siblings Madhur, Shekhar and Niraj are their cousins, but the five have always been considered brothers. Interestingly, the dispute saw Shishir on one side, and Rahul, Niraj, Shekhar, and Madhur on the other. The September meeting was also attended by Kushagra Bajaj, son of Shishir Bajaj, brother-in-law of Kumar Mangalam Birla of the Aditya Birla group, and the man widely seen as having asked for more and caused the split.

Last September’s meeting helped clear some bad blood between the two camps and set the stage for a settlement. And according to Niraj Bajaj, it happened “just like that".

“We kept bumping into each other as our offices are on the same floor and the meeting happened..."

By the end of the meeting the five Bajaj brothers had agreed that Niraj, chairman and managing director of Mukand Ltd, the steel products firm, and the youngest of the five and his nephew, Kushagra, the joint managing director of Bajaj Hindusthan Ltd who is acknowledged even by his uncles as one of the brightest and ablest minds among the Bajaj scions, would work out the details of the settlement. The two were asked to meet the next day to understand the issues and work out a formula that would be acceptable to both camps.

And on 1 January, the Bajaj group announced to the world that the settlement had been reached.

Kushagra said his family was happy with the settlement but declined further comment.

Jamnalal Bajaj, the founder of the Bajaj business house, was a businessman with a nationalist mindset who funded the freedom movement in part. Mahatma Gandhi, one story goes, used to refer to Bajaj as his fifth son. His five grandsons, Rahul, Shishir, Shekhar, Madhur, and Niraj built and nurtured a business with interests in two-wheelers, insurance, sugar, steel, and household electrical appliances.

“We were proud of our legacy. All major business families...(in the) second or third (generation) have separated in some form or other. Even if you count us as the third generation and our children as the fourth generation, we were united and a close-knit family," said Niraj.

That changed in 2001. At a family gathering in Pune, Shishir asked for a division. The rest of the family brushed off his demand because they never thought he was serious.

Then, seven months later, at another family gathering, Shishir repeated his demand.

“We were all shocked," says Niraj, all the more so because “there was equality in what we (the brothers and their families) did."

According to him, everyone was entitled to the same share of profit from holding companies. “The pocket monies, the number of holidays...were all decided in a fair and equitable manner," says Niraj. “Till then (late 2001), the family used to celebrate festivals together and we used to go on holidays together."

Shishir’s demand, seen within the family as having been made at the instance of Kushagra, changed all that. The two camps intermittently washed dirty linen in public and fought battles on several fronts including in the media. Kushagra was at the forefront of the battle, as was Rahul Bajaj, the patriarch of the family.

At the heart of the matter

Niraj declined comment on the specific points of contention between the two camps. However, media reports, and documents related to the fight between Bajaj and Bajaj, that have been previewed by Mint, show that it started with Kushagra.

Shishir’s son wanted to have the financial services business of Bajaj Auto Ltd, which was subsequently carved out in 2008, and is now under the management control of Sanjiv, Rahul’s younger son. Kushagra decided to focus his attention on creating a global sugar firm and he believed he could do it with Bajaj Hindusthan, provided he and his father could break away from the Bajaj group. “I thought that if I struck a deal, howsoever unfair it was, I would ultimately get the freedom to pursue my own vocation as an aspiring entrepreneur and business manager. I would be able to work to my heart’s content, and god willing, I could achieve business success...", he said in a media note during the height of the dispute in 2007.

The rest of the family clearly didn’t see it that way.

“In a joint family, some sacrifices and compromises are required to stay together," Niraj said. “A separation was not in anybody’s mind."

It is also clear that no one in the group had the slightest intention of expanding the sugar business into one of global scale. Bajaj Auto, which has since been split into finance, auto, and investment firms in an informal division between Rahul’s son’s Sanjiv and Rajiv, was the largest firm in the group. The rest were small in terms of both revenue and market value.

Kushagra had other ideas. He returned to India in 2001 after graduating with an MBA from the prestigious Kellogg School of Management, Northwestern University, US; And as he said in the same media note, “We planned to take our share, even if it was substantially lower than what was due, and chart our own course of life."

The initial reaction of the rest of the family was disbelief, says Niraj.

“We were always proud of the fact that we were a joint family in the true sense of the joint family. All the companies were professionally managed and one member of the family would be at the helm. The ownership was divided among all the family members. In terms of wealth and ownership there was no differentiation."

After it became clear that Shishir and Kushagra wanted out, the talks began.

“When wavelengths were not able to meet, we saw no option but to separate," says Niraj.

And while the family tried to work out a settlement, the shares of the Bajaj companies rose with the rising market.

“Throughout this period, our companies prospered including Bajaj Hindusthan and all credit for this goes to Kushagra," adds Niraj.

A history of mediation

Later, S. Gurumurthy, convenor of the Swadeshi Jagran Manch, a right-wing organization, was drafted to play the role of mediator. He exhorted the family to patch up and not destroy the Bajaj legacy.

“My involvement in Bajaj family settlement was entirely personal, and it would not be possible for me to comment. It is better they do it," he says.

Then, between September and December last year, everything came together. And plunging stock market indices seemed to have played a role.

The settlement, says Niraj, was made possible by “God’s grace and (due) to the market meltdown, that saw share prices of group companies getting realistic".

How the bears helped

In 2003, Gurumurthy had worked out a settlement that the two camps had signed off on, but the stock market boom prevented this from being implemented.

The split had to be effected by various members of the Bajaj family, buying stakes in some group companies from other members of the family, and selling stake in other group companies to them. The rally on the bourses, however, saw most Bajaj stocks soar. By December 2007, the combined market value of all Bajaj companies was Rs35,488 crore. By the time the settlement was reached, the combined market value of these companies had fallen to Rs12,386.23 crore.

The lower valuation actually worked to the benefit of both camps—they paid lower stamp duty, or tax on transactions.

Niraj says several misunderstandings were cleared up at the 26 September meeting.

Subsequently, with the help of some of the country’s best known lawyers, the two camps signed 20 agreements “big and small", according to Niraj. They also made around 100 transactions by 31 December, as the month of January heralds the earning season for companies, and promoters are forbidden from trading in shares of companies they control, because boards are scheduled to meet to consider quarterly results.

And by 31 December, they had a deal, and Shishir and Kushagra had the two companies they wanted and some family assets.

Niraj would like to believe that things never spiralled out of control even though the family fight lasted seven years. Talks did break down, and both sides did approach the Company Law Board, the government arm that oversees the functioning of companies, but the brothers couldn’t avoid each other at work—their offices are all in Bajaj Bhavan and those of Niraj and Shishir actually share a common terrace. “We used to go on evening walks together," says Niraj, who hopes that one day the five brothers will again gather for family get-togethers.

The split, for that is what the settlement really is, has come in the fourth generation of the Bajaj family. Business historians say that it is difficult for a family to stay together beyond three generations.

“In the western world, hardly three out of 100 businesses make it to the third generation of a business family," says Gita Piramal, business historian and the author of Business Maharajas.

Most corporate failures happen because of a lack of focus due to diversification and an over extension of growth without commensurate growth of management processes. Internal issues such as complacency and lack of innovation come into play. So the moment there is a family split, there is much more desire for the family head to make the business work, she adds.

Still, Niraj insists the Bajaj group is very much together.

It is not as if the group is being split into five parts, he says. It is just that one brother wanted to separate.

“The four of us remain together," he says.