As the pace of funding slows amid sobering start-up valuations, venture capital firms in India are busy returning capital to their investors

Mumbai: Social media isn’t usually the best place to gauge the pulse of the venture capital industry in India.

The majority of the country’s small tribe of home-grown venture capitalists tend to be extremely reserved with their views in public.

But something has changed in the past nine months.

Venture capitalists are talking on social media, and a lot. The talk is mostly around funding, valuations, business metrics and exits. The talk around exits, when venture capitalists sell shares in portfolio firms to book profits, is the most enthusiastic.

The past nine months have been the toughest that the current generation of early-stage investors in this market has faced since it started investing here a little over 10 years ago.

A whole bunch of portfolio companies that looked like sure winners just over a year ago, now stand on shaky ground. 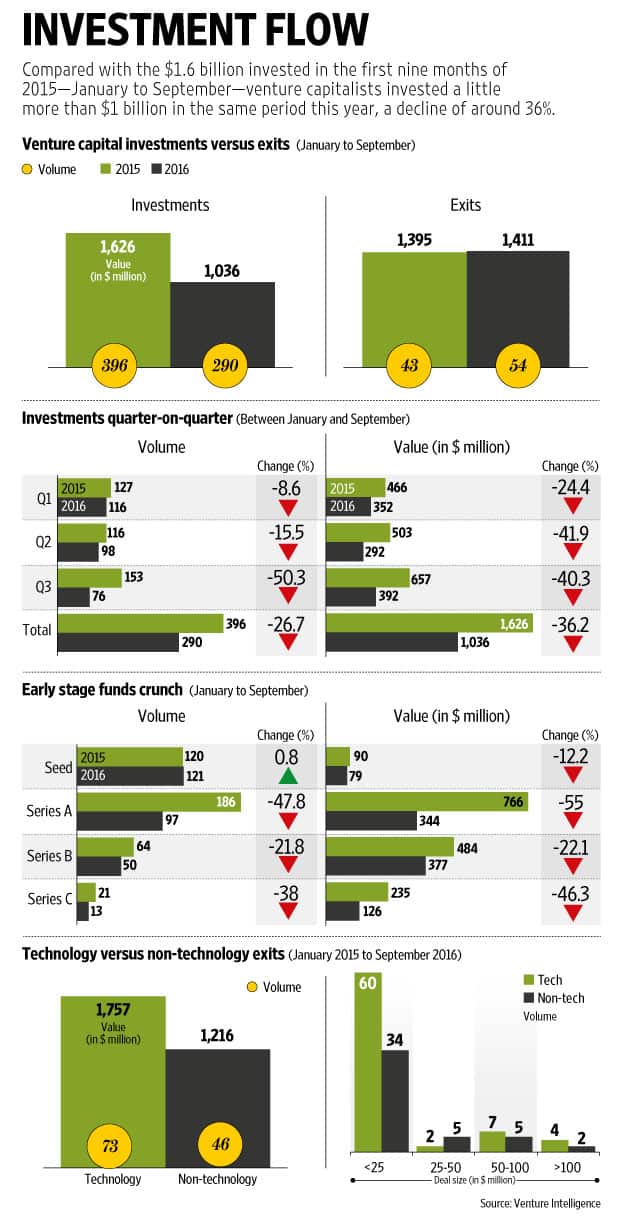 Several others have shuttered operations, leaving behind bruising investment write-offs. Valuations have sobered from their fairy tale levels last year. Growth capital, particularly for mature consumer Internet start-ups—the flag-bearers of the prevailing start-up wave—has dried up with the flight of hedge funds and assorted strategic investors. And unicorns—technology start-ups privately valued at $1 billion or more—are no longer openly coveted trophies in investor portfolios.

Yet, despite the obviously grim environment, India’s venture capital market isn’t looking half as bad as many would have expected when the bottom fell out late last year. Sure, the pace of investments has slowed, and fairly significantly. Compared with the $1.6 billion invested in the first nine months of 2015—January to September—venture capitalists invested a little more than $1 billion in the same period this year, a decline of around 36%, according to data compiled by Chennai-based research firm Venture Intelligence. The important thing to note though is that investments have not stopped. Young start-ups across technology segments continue to find early-stage capital—as many as 290 raised capital at the seed and alphabet rounds (Series A, B, C and D)—in their formative stages.

India also isn’t the only market in the Asian region that has experienced a decline in investments this year. Venture capital-backed firms in China drew $3.9 billion across 84 deals in the third quarter of 2016. This represents a 31.3% decline from the preceding quarter and a 63.9% decline from the corresponding quarter last year in terms of dollars invested, according to the KPMG and CB Insights’ Venture Pulse Report. The overall Asian region, which includes India, China and South-East Asia, saw investments in venture capital-backed companies touching $21.9 billion in the nine months to September, a 29.5% decline from the $31.1 billion invested in the corresponding period last year, says the report.

It should be noted that the Venture Pulse Report takes into account investments beyond the seed and alphabet rounds. Therefore, the data is not exactly representative of venture capital investment activity. However, since the seed and alphabet rounds, which constitute venture capital’s principal playground, form a large part of the data, the report still offers insights into early-stage investment patterns in the region.

Venture capital firms in India are busy returning capital to their investors, delivering the best possible return they can in a grim market scenario

The decline in investments in India can be attributed to two factors. One, compared with last year, there is much less money available in the market. Up until September last year, capital was no constraint in the Indian start-up market. A number of global hedge funds were more than willing to quickly write out large cheques to just about any start-up that looked promising, especially in the consumer Internet sector. So were a variety of strategic investors, chief among them Japan’s SoftBank Group Corp.

The valuations they were willing to offer to buy into start-up assets left most venture capital investors floundering at the deal table. This was the environment in which online budget stays aggregator OYO Rooms, then just about three years old, raised a $100 million round of funds from a SoftBank-led investor consortium. And, Little, an app-based deals marketplace, raised an unprecedented $50 million Series A round of funds from a group of investors that included One97 Communications Pvt. Ltd, owner of mobile payments service Paytm, Tiger Global Management and SAIF Partners.

Last September, when the public markets turned choppy soon after China devalued the yuan, hedge funds such as New York-based Tiger Global started to go slow on start-up investments in India. Tiger Global, which invests in start-ups from a separate venture capital fund, had by this time sunk more than $2 billion into Indian start-ups, according to reported estimates. This year, hedge funds have been less visible in the early-stage investment market. Even SoftBank hasn’t done much since the departure of president and chief operating officer Nikesh Arora in June this year. They have been replaced by a number of other strategic investors, chief among them a host of Chinese technology giants, but none as aggressive in their deal-making as the hedge funds or SoftBank. That’s the negative factor.

The second factor is actually a positive one. For the past nine months, venture capitalists themselves have put less capital to work because they have been occupied with returning money to their investors. As a result, for the first time in this market, the total value of exit deals exceeded the total value of investment deals—against investments worth $1.03 billion, venture capitalists struck exit deals worth $1.4 billion during the nine months to September.

With even Flipkart struggling to hold its own against Amazon, exit prospects for its venture capital investors look grim

Exits have long been the bane of the country’s venture capital industry. While the industry has served up exits from time to time, the Indian venture capital market is yet to demonstrate its ability to deliver blockbuster exits on the lines of a Facebook or a LinkedIn, or even an Alibaba. Blockbuster exits are those that typically return anywhere between 10 times and 50 times the original capital invested. Limited partners, industry parlance for investors in venture capital funds, expect to see one or two such exits from a fund’s portfolio for the fund to be able to multiply its original corpus by at least four-five times over its life cycle.

As things stand now, limited partners have a longer-than-anticipated wait for those blockbuster exits. Up until last year, such exits were expected to come from India’s celebrated consumer Internet start-ups, notably from the e-commerce sector.

But with even Bengaluru-based e-tailer Flipkart, the country’s most valuable start-up (it was valued at $15.2 billion when it last raised funds in July last year), struggling to hold its own against Seattle-based e-commerce giant Amazon, those prospects look grim. Therefore, in the interim, and probably at the behest of limited partners, venture capitalists have been hard at work delivering the best possible returns that they can muster in the short term. 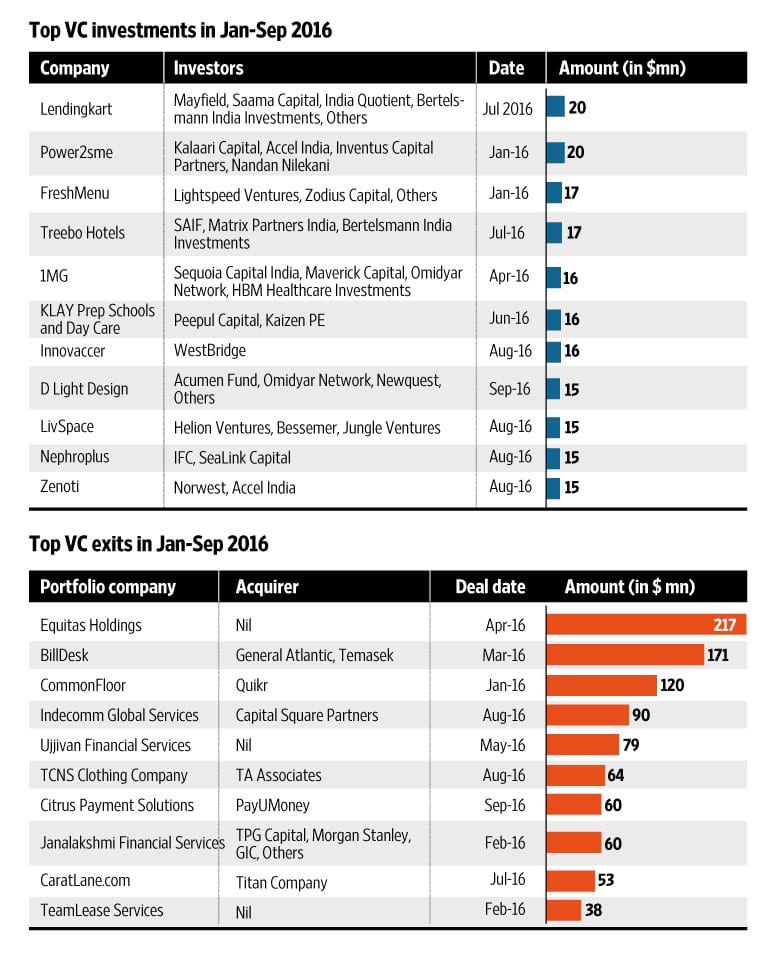 To be fair, however, while venture capitalists may have stepped on the accelerator with exits this year, the process of returning capital to limited partners has been well under way since last year.

Since January 2015 till date, venture capitalists have delivered 73 technology exit deals worth $1.7 billion at a median return multiple of 4.2 times the original capital invested. By comparison, investors struck 46 non-technology exits worth $1.2 billion and delivered a median return multiple of 3.1 times the original capital invested. That there have been more technology exits than non-technology ones is not surprising, given that over the past two years, most investors, barring impact funds, practically brought fresh and follow-on non-technology investments to a halt. There may be a case yet for venture capital firms to pursue investments in non-technology start-ups, especially in sectors such as healthcare, education and specialist retail. Also, given that we don’t yet know the full extent of the damage that the valuation bubble from last year has caused, technology investment portfolios may still have a fair degree of write-downs to absorb.

By most accounts, exits, whether from technology or non-technology start-ups, will continue to dominate venture capital activity through the fourth quarter and most of next year. There’s a two- or three-year window at the most before nearly every venture capital firm worth its name has to get back on the road again to raise its next fund. The next batch of India-dedicated funds will be much harder to come by if exits don’t gather further momentum.

For entrepreneurs, that means it’s going to be tough to find early-stage capital for a while. This is especially true for those start-ups that are currently in the market for Series A stage capital. Series A is typically the first round of venture capital raised by a start-up to take its product or service to market. In the nine months to September, such investments plunged 55% to $344 million, compared with the same period last year. Fewer companies have also gotten funded—the number of deals are down 47.8%. The Series A funding crunch could have devastating consequences for companies at the seed stage. The number of seed deals has actually grown by a marginal 0.8% in the past nine months. If the Series A crunch doesn’t ease soon enough, a great many of the 121 start-ups that raised seed funding this year will die.

In a few weeks, Flipkart, the poster child of the current start-up wave, is expected to go to market to raise a fresh round of funds. It may raise the round at its last reported valuation, $15.2 billion, or at much lower. There are also reports that Ola, the cab hailing service, is in talks to raise up to $500 million in a round led by its existing investor SoftBank. Their fundraising campaigns, if successful, could offer a much-needed breather that the start-up market needs after a gruelling nine months.