The world’s media giants, as far as ad revenue is concerned

Google and Facebook are far ahead of Comcast, Baidu, Disney in advertising revenue, accounting for 20% of global advertising expenditure across all media in 2016

Google and Facebook together accounted for 20% of global advertising expenditure across all media in 2016, up from 11% in 2012, according to a report titled Top Thirty Global Media Owners, published by media agency Zenith, a part of Publicis Media. Between 2012 and 2016, the two companies captured 64% of the growth in global advertising expenditure.

Google, under its holding company Alphabet Inc., is by some distance the largest media owner in the world, attracting $79.4 billion in advertising revenue in 2016, three times more than Facebook, the second-largest, which attracted $26.9 billion, according to the report. The largest traditional media owner is Comcast, which takes the third place in the ranking, with $12.9 billion in ad revenue. Zenith’s quarterly Advertising Expenditure Forecasts published in March this year stated that has overtaken television to become the world’s largest advertising medium. It said global Internet advertising expenditure will grow 13% to reach $205 billion in 2017 and that Internet will attract 36.9% of all advertising expenditure, up from 34% in 2016. This will be the first year when more money will be spent on Internet advertising than on traditional television (which will total $192 billion).

Accordingly, digital platforms funded by Internet advertising dominate Zenith’s top 30 ranking. Other than Alphabet and Facebook, there are five pure-Internet media owners in the top 30—Baidu, Microsoft, Yahoo, Verizon and Twitter. Between them, the seven digital platforms generated $132.8 billion in Internet ad revenue in 2016—73% of the entire Internet ad spend and 24% of global ad spend across all media.

Alphabet tops the list, way ahead of the competition. Created in August 2015, Alphabet is a collection of businesses, which fall under one of two segments: Google, which includes the main Internet-related products and services; and Other Bets, for newer initiatives, such as life sciences, Calico and Nest. Developer of the world-leading search engine, Google earned 88% of its revenues through online search advertising in 2016 (although the proportion of its revenues deriving from non-advertising sources such as hardware sales, sales of apps, in-app purchases and digital content products, as well as service and licensing fees, is increasing all the time). The AdWords auction-based program allows targeted advertising for businesses, while the third parties that make up the Google Network use the AdSense program to deliver user-relevant ads and generate more revenue. Meanwhile, Google Analytics provides detailed statistics about any given website’s traffic, which is very useful for marketers and is typical of Google’s integrated approach to its products.

It also owns the smartphone operating system Android—originally developed by a separate company of the same name, which Google backed financially and then bought out in 2005. In October 2016 it launched Pixel, the first Google-branded smartphone, to general acclaim. Other key products include web browser Google Chrome, Cloud, Apps and Google Play, as well as hardware, such as Chromebooks and Nexus. Total advertising revenue increased from US$67.4 billion in 2015 to US$79.4 billion in 2016, with operating profits up 22.5% over the same period to US$23.7 billion.

Facebook is a pure-play Internet platform and the world’s second largest media owner by ad revenue, accounting for 15% of global Internet advertising expenditure—and 5% of total advertising expenditure—in 2016. Its ad revenues have grown at an average of 44% a year for the last five years, thanks to its huge reach, its detailed knowledge of its users, and its early and successful adoption of mobile advertising. Facebook was launched in 2004 by Mark Zuckerberg and his college roommates, and was initially exclusive to Harvard University. It soon spread to other educational institutions around the US, then Canada, and by late 2006 it was open to anyone over the age of 13 with an email address.

By the end of 2013 it had 1.2 billion users who visited at least once a month, and 800 million who visited once a day. By the end of 2016 these numbers had risen to 1.9 billion and 1.2 billion, respectively. That means half of all the world’s Internet users log in at least once a month, and a third log in every day. Facebook sells advertising on its main website and associated app, on its second platform Instagram, and on third-party platforms. It allows advertisers to target users based on the highly personal information that they provide, such as the details of their most intimate relationships, and the books, films, products, services, political parties and places they like best.

Mobile advertising contributed 83% of Facebook’s total ad revenue in 2016, up from 77% in 2015. Most digital platforms have struggled to adapt to mobile devices, where standard display ads are intrusive and less effective. Facebook’s news feed ads sit naturally in the flow of content viewed by its users, and work well in the mobile format.

Facebook’s mobile ad revenues exceeded its desktop ad revenues by the end of 2013, a milestone that the Internet as a whole did not achieve until 2017. Most Internet advertising is now mobile, so Facebook can no longer rely on the transition from desktop to mobile to fuel growth in its ad revenues. Now it is focusing on the next transition, from text and images to video. Facebook hosts billions of video views per day, and since May 2016 has allowed users to share live video with each other. Facebook is publicly listed on Nasdaq. Mark Zuckerberg remains the largest shareholder with an approximate 24% stake.

Comcast Corp. is a media and communications company based in the US, but with several international television channels. It has two main businesses: Comcast Cable, a leading telecom services provider that offers video, phone and high-speed Internet services to 29 million residential and business customers in the US (the former under the XFINITY brand); and NBCUniversal, which operates news, entertainment and sports cable networks and the NBC and Telemundo broadcast networks. NBCUniversal also has filmed entertainment, and theme parks divisions, which are key contributors to the overall business.

Following a small decline in 2015, Comcast’s ad revenues rose by 13% to $12.9 billion in 2016. Total revenue was up 8% year-on-year, with operating profit up 5%. NBCUniversal’s cable networks division spans 16 national cable networks in the US, 15 regional sports and news networks, and more than 60 international channels. The broadcast TV division, meanwhile, runs the US national TV network NBC and the Spanish-language network Telemundo, which reaches 59% of Hispanic television households in the US; it also includes the 10 NBC and 17 Telemundo local broadcast TV stations.

NBC News and NBC Sports are important members of the broadcast brand, the latter hosting the top-rated Sunday Night Football. The majority (81% in 2016) of Comcast’s ad revenue comes from these two divisions. The remaining $2.52 billion in 2016 ad revenue came from Comcast Cable, which is granted an allocation of ad slots within the cable networks it transmits to its customers. This is only 5% of the total revenue generated by Comcast Cable, which gets most of its money directly from its cable customers. Comcast has plans to launch a mobile phone service this year, expanding its triple-play offering to four products. 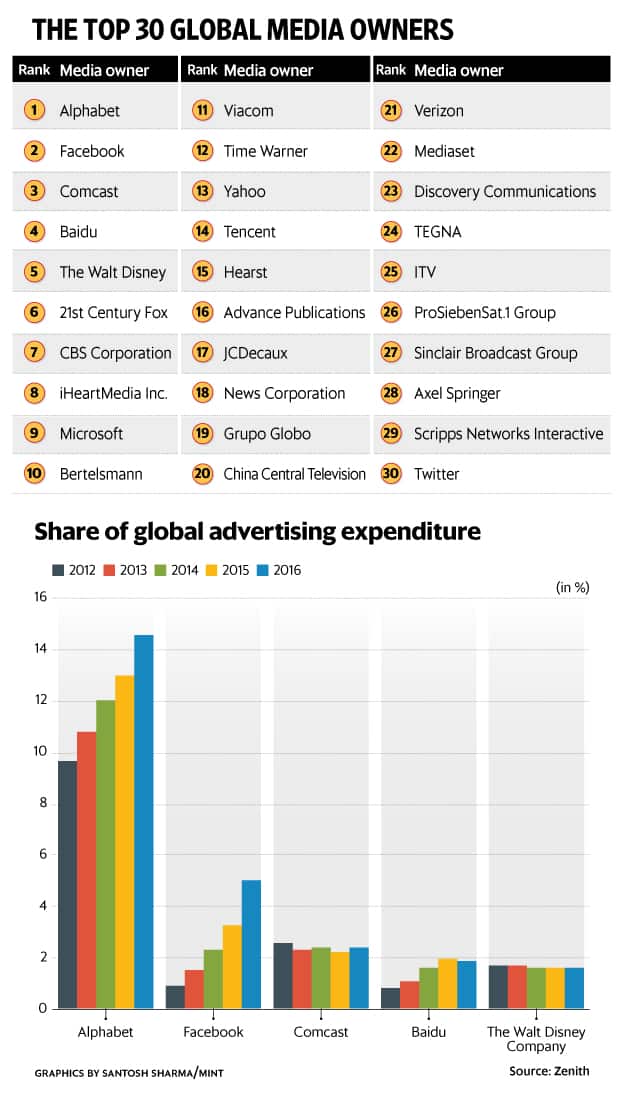 Baidu Inc. rises to the fourth place in this year’s edition, reflecting the breakneck pace of its growth—it broke into the ranking at number 28 just three years ago (in a list ranked by our previous definition of “media revenue"). It offers Chinese language Internet search services and is one of three entries in our top 30 based in China, the others being the state TV broadcaster CCTV and social networking/gaming/messaging giant Tencent. Formed in 2000 as a search engine for other sites such as Sohu and Sina, Baidu soon became a website brand in its own right and floated on the NASDAQ exchange in 2005—where it is now a member of the NASDAQ-100 index.

Its offering is in many ways similar to that of Google: its principal property, the baidu.com website, has a simple, clean appearance—its homepage consists of a search box in the middle of the page on a white background, with the Baidu logo above the box. Users can search the web, images, news, videos and use various tools such as Baidu Maps and Baidu Knows (a question answering service) among many others. Like Google, Baidu has developed a wide variety of services intended to serve consumers’ requests for information and entertainment, with products ranging from social networking to security, including user generated content, location-based services, entertainment, mobile services, and e-commerce. Baidu’s search services are used by more than 90% of all Chinese Internet users.

Most of Baidu’s services are free for consumers, and it generates the vast majority of its revenue from advertising. This advertising appears alongside Baidu’s search results and content from its other services, as well as alongside the content of third-party websites belonging to the Baidu Union network. China’s Internet users are rapidly switching their browsing habits from desktop to mobile. Baidu’s mobile search traffic exceeded its desktop traffic for the first time in Q3 2014, and in Q4 2016 Baidu’s mobile revenue accounted for 65% of total revenue, up from 56% a year earlier.

Walt Disney Co. generates revenue in four key segments: media networks, parks and resorts, studio entertainment, and consumer products and interactive media. The media networks division includes Disney’s domestic and international television channels, and its television production business. Parks and resorts is the side of the business that runs the theme parks and cruise ships. Studio entertainment is the film distribution segment. And consumer products and interactive media is devoted to merchandising, books and other consumer items, as well as online properties such as multi-platform gaming, online advertising and sponsorships.

The relevant divisions to this report are media networks, and consumer products and interactive media. Advertising is one of the main sources of revenue for media networks, generating $8.61 billion in 2016 and accounting for 36% of its revenue that year. Fifty-two percent of its revenue came from affiliate fees (fees paid by cable operators and other distributors to allow them to carry the Disney channels), while the rest came from other distribution fees and programme sales. Advertising is a relatively minor component of the consumer products and interactive media business, generating $130 million in 2016, or just 2% of the division’s total.

The Disney Channel is the best-known of the TV properties that carry the Disney brand. In 2015, it was the most-watched network in the US among total viewers for the first time. Disney Channels Worldwide, which includes the Disney Channel, Disney Junior and Disney XD among others, provides over 100 channels in 34 languages to 163 markets across the world. But Disney has other important TV assets, too, including one of the top US TV national networks, ABC, which broadcasts hits such as Grey’s Anatomy, Marvel’s Agents of S.H.I.E.L.D. and Once Upon A Time. Cable network Freeform (formerly ABC Family) is a US channel targeted at viewers aged 14-34. Disney also owns 80% of the sports entertainment company ESPN, which operates eight sports networks. In India, Disney owns the children’s entertainment channel Hungama, the movie channels UTV Action and UTV Movies, youth entertainment channel Bindass and music channel Bindass Play.