Mumbai: Even as the dust settles on the bruising battle between Jet Airways (India) Ltd and its pilots, there are new moves to bring all airline employees in India under a single trade union and perhaps alter the bargaining balance between airlines and their 60,000-plus workforce. 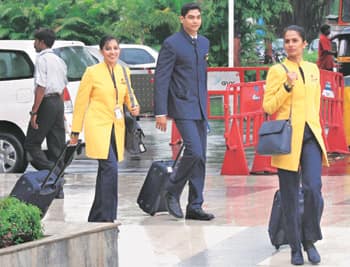 One voice: file photo of Jet Airways crew members. Existing unions in the civil aviation industry are in talks for a larger national union.Shirish Shete/PTI

A person close to the development said representatives of two low-fare carriers and one full-service carrier met international trade union representatives in the city last week to discuss the possibilities of forming a union in their respective carriers.

“Some segments such as cabin crew and ground workers had also approached the union leaders as the working conditions are not favourable for them. Job security of contract employees has become a critical issue," he said.

He did not want to be identified and share the name of carriers as the case is too sensitive.

Mahendra Sharma, regional secretary (Asia-Pacific region) of International Transport Workers’ Federation (ITF) confirmed that some of the airline officials met him to explore possibilities of forming a union. At least 654 unions representing 4.5 million transport workers in 148 countries are members of ITF.

“We are in touch with other private carriers on this issue. But we are looking at creating a larger national union for civil aviation. We are in talks with existing unions for a larger body," Sharma said.

He said ITF is in talks with unions such as Indian Pilots Guild (IPG) and National Aviators’ Guild (NAG) for one national union.

The office bearers of Jet’s NAG had said it would like to be affiliated with the International Federation of Airline Pilots’ Associations, which represents at least 100,000 professional pilots in around 100 countries across the world.

“Ideally, there should be one union for the Indian civil aviation industry and there shall be branches based on professions. In fact, Europe and the US have the practice (of) one national union," said AIEG general secretary George Abraham, who has 25 years of trade union experience. He was instrumental in leading the Jet Airways pilots’ strike.

Vasudevan Thulasidas, former Nacil chairman and managing director, now a consultant to various aviation projects of the Kerala government, said it makes sense when a company has one union rather than multiple unions.

“When unions bargain trade wise, they will argue for their respective rights and will not keep company as a whole. It will also increase human resources cost if a company ends up in talking to a dozen unions," Thulasidas said.