New Delhi: Honda Siel Cars India Ltd is likely to stop selling the Civic, a runaway success when it was launched in the country in 2006 but now a victim of the market’s wholesale switch to diesel because the fuel is at least 40% cheaper than petrol.

Without a diesel option, the Civic’s sales have been dwindling—309 were sold in July, down 79% from the year before.

The sales of the sedan may be discontinued by the end of the year, according to three people familiar with the development. 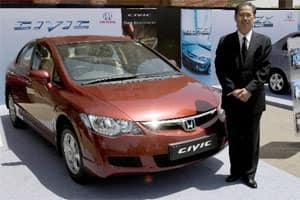 File photo of Masahiro Takedagawa, president and chief executive officer of Honda Siel Cars India Ltd., poses for a picture next to a Honda Civic in Jaipur. Bloomberg

Sen said a final decision is yet to be taken on whether the present model will be discontinued and the new generation of the car, launched last year, will be brought to India.

“We are pondering on the issue," Sen said. “We are still producing the car, and will be producing it even in August; but we don’t know about the future."

The discontinuation of the Civic could mark the beginning of the end of petrol models in the Indian market, where demand has significantly shifted toward diesel.

Car sales grew 5.22% to 490,802 units in the April-June period, according to data provided by the Society of Indian Automobile Manufacturers (Siam) lobby group.

The proportion of diesel cars sold in India has steadily risen from 21.4% of total cars sold in fiscal 2008 to 40% in the year ended 31 March and 50% at the end of the June quarter this fiscal, according to Siam data.

Not only that, due to poor demand, Honda’s rival Toyota Kirloskar Motor Pvt. Ltd stopped production of its entire range of petrol engines in June.

To be sure, Honda offers a 1.6-litre diesel Civic in European markets but this isn’t compatible with fuel available in India.

“That engine is specifically developed for Europe and it is a no-sulphur engine. That engine cannot run on the quality of diesel available in India," Sen said.

“A separate diesel engine is under development for the Indian market, but I cannot comment on its size, time frame or anything," he added.

According to two Honda dealers who spoke with Mint on condition of anonymity, the company is expected to bring in the diesel variant by the end of this fiscal.

The country’s leading automobile magazine Autocar India reported on 2 August that the production of the Civic is expected to last till the festive season, starting September.

“Assembled from completely knocked-down (CKD) kits here in India, Honda will build what remaining kits it has, and production is expected to last until about Diwali. With no plans to bring the next-generation model that was launched internationally in 2011, this effectively ends the Civic line in India," Autocar India said in its report.

The Civic was the second sedan launched by Honda in India after the City. It swept the segment with its sleek lines and digital speedometer despite its lack of adequate ground clearance.

The car was a hit with Indian customers due to its design and the lack of competition in the segment, said Pradeep Saxena, executive director at market research TNS Automotive.

“When Civic was launched, (Hyundai’s) Elantra was already being phased out and Toyota had a dated model of the Corolla," said Saxena. “Civic’s success could be attributed to that."

In the past few years, the diesel factor had affected sales, he said.

“Now, with the rising yen and low volumes of the car, it’s not worthwhile to produce the car," he said.

“And bringing in the new Civic would mean fresh investments as Honda goes for a full-model change right from body to chassis. So if you are not doing good numbers, the price proposition becomes difficult," he added.