Domestic aviation market share numbers for May, released last week, show IndiGo flew more passengers than Jet Airways and Air India combined. In fact, from November 2014 to May 2015, the market leader has been the only older airline to gain market share—that too of a significant 5.3 percentage points, from 33.6% to 38.9%. Here’s how the airline did it.

IndiGo was the only older airline to add market share in this period, accounting for nearly two-thirds of the 1.25 million passengers added by all Indian airlines in May 2015 over November 2014, partly a result of its superior financial position. The other two airlines that added market share, AirAsia and Vistara, are both new, growing from a small base. It added more flights than all others combined, and used them more

Every October and March, airlines submit to the aviation regulator flight schedules of where, how much and when they plan to fly in the coming six months or so. In a period when total domestic flights stayed flat, IndiGo added 15.7% more flights. This was next only to AirAsia, which grew on a base 30 times smaller. IndiGo added 838 flights per week, against a combined figure of 725 for the other four airlines that recorded gains. And, in terms of filling up its flights, it was next only to SpiceJet, which is rebuilding after a marked scaledown in its operations. It led capacity addition in metros

In a period that saw SpiceJet go to the brink of closure and GoAir cut back on certain metro routes, IndiGo stepped up its flight departures from all six main metros. Its capacity addition was the maximum in Delhi and Mumbai, two of the three metro departure points from where SpiceJet pulled back the most. Jet was the only other major airline that added capacity on departures across metros. 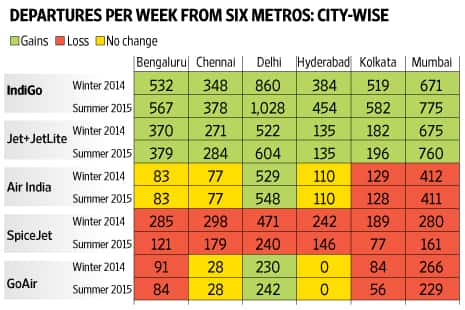 It leveraged its non-metro presence the best

On departures from metros, IndiGo had competition from Jet in capacity addition. But in non-metro routes, IndiGo was the only one adding flights, outnumbering its closest rival on this metric, eight to one. Another metric of non-metro resilience is how airlines leveraged their top five routes: only IndiGo and to a smaller extent, Jet registered gains. 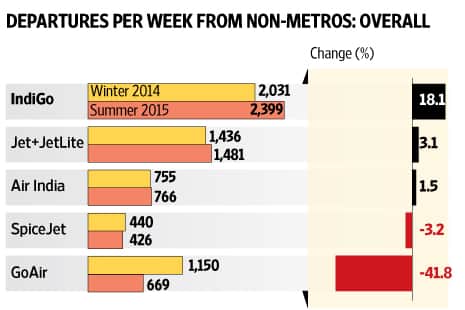