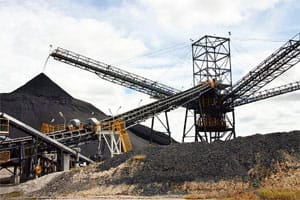 Black gold: A coal mine in Queensland, Australia. The country has vast resources of quality coking coal used in manufacturing steel. Aquila Resources Ltd via Bloomberg

The takeover tussle comes as Indian steel mills ramp up their search for raw material overseas in a bid to feed voracious domestic demand for steel.

Australia is the world’s largest coal exporter and has vast resources of quality coking coal, used in steel making.

Indian power companies have also in recent months expressed an interest in buying Australia’s coal assets, as forecasts of India’s huge growth in power consumption have also sparked concerns of a spike in coal prices over the next few years.

Perth-based Rocklands, which had previously agreed to Jindal’s deal, said it would hold a board meeting to consider the merits of the competing proposals.

The current annual trade in seaborne coking coal is around 250 million tonnes (mt), of which around 130 mt comes from Australian mines operated by companies such as BHP Billiton and Xstrata Plc. India consumes around 59 mt a year.