Home >Companies >Start-ups >10 years on, a time of reflection for venture capital firms in India

10 years on, a time of reflection for venture capital firms in India

The concerns aren’t being discussed in hushed tones any more. By all accounts, the correction in India’s venture capital (VC) market is real. Large cheques aren’t being written out as quickly as they used to be six months ago. Fund managers are monitoring cash-burn rates in portfolio companies much more closely. And, every investor with bets—large or small—in the consumer Internet sector is hoping that the big valuation mark-ups they’ve been sitting on so far don’t take too much of a beating.

But it’s a correction. Not a bust. At least, not yet. As India’s venture capitalists complete 10 years of sustained investing in this market this December, the correction will give them just the window they need to pause and introspect on what has been a truly remarkable decade for start-ups and investors alike.

“Winter is around the corner. And, it’s going to be a long, hard one. But, it also brings with it the opportunity to go back to the basics, uncover new ideas and build the next generation of start-ups," says Niren Shah, managing director, Norwest Venture Partners India. The Menlo Park, California-based firm has been investing in India since 2007. 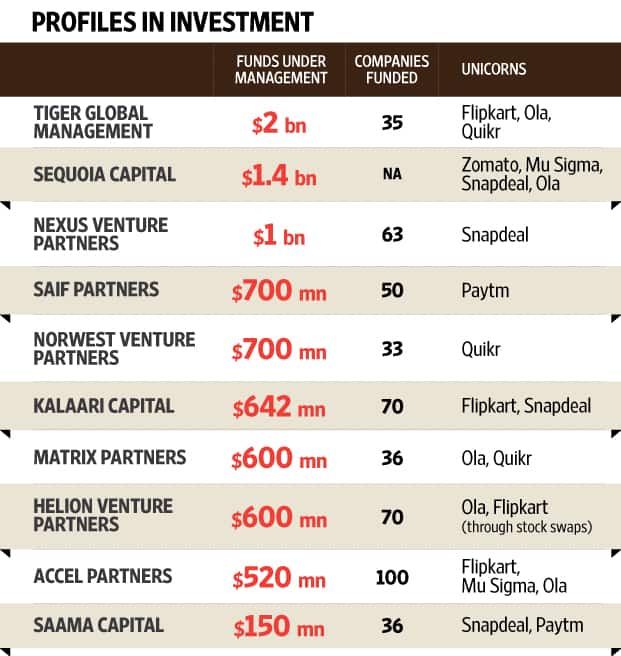 Over the last 10 years, venture capitalists have played a central role in shaping India’s start-up ecosystem and ushering in a decade of innovation and disruption. Early 2006 was when it all came together in India for venture capital firms. The economy was on a roll (and would be for a few more years). Some of the early movers in the space had started prospecting the lay of the land in 2003. In 2006, almost every large venture capital firm active in India launched their operations in a serious way.

Their journeys from garage start-ups to the mythical valuations they command now—each is valued at billions of dollars—wouldn’t have been possible without the support of risk capital.

Since 2006, venture capitalists have been involved in deals worth more than $15 billion across more than 2,000 start-ups, according to data compiled by VCCEdge, an online research platform.

A large chunk of this capital has come from later-stage investors such as hedge funds, strategic corporate investors and mutual funds, but venture capitalists have been the catalysts for bringing in this late-stage capital. India is now home to more than 3,000 technology start-ups, around 800 new ones are born every year, and eight of the world’s 140-odd start-ups valued at over $1 billion are from here. 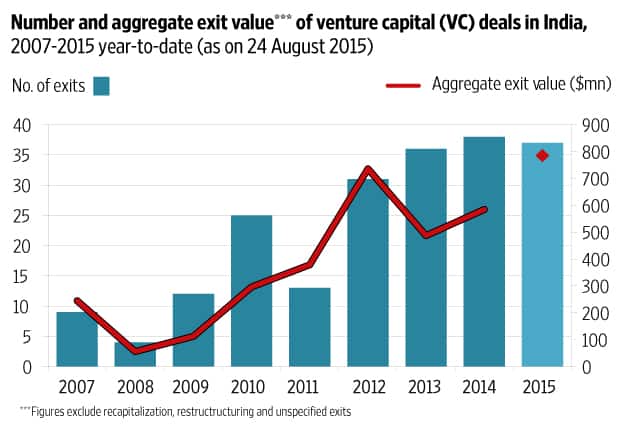 “While infrastructure developments such as telecom, payment systems and roads have been important, risk capital has been the most influential factor in helping kick-start the start-up ecosystem," says Kanwaljit Singh. The Bengaluru-based venture capitalist, who invests through his family investment firm Fireside Ventures, played a key role in ushering in the second wave of venture capital in India.

In 2006, Singh quit private equity firm The Carlyle Group and co-founded Helion Venture Partners. It was one of the first homegrown venturecapital firms to start in the country in the shadow of the dotcom bust. 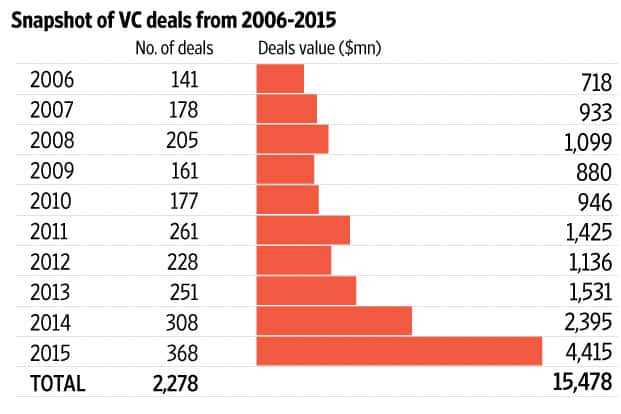 Since then, the complexion of the industry has changed somewhat. Several of the early Silicon Valley adventurers, such as Kleiner Perkins Caufield & Byers, Draper Fisher Jurvetson and Canaan Partners have wound up operations in India and retreated to home base.

Giving them company are a handful of Silicon Valley firms that chose to stay on and raise India-dedicated funds. These include Matrix, Sequoia, Accel Partners and Mayfield Fund. 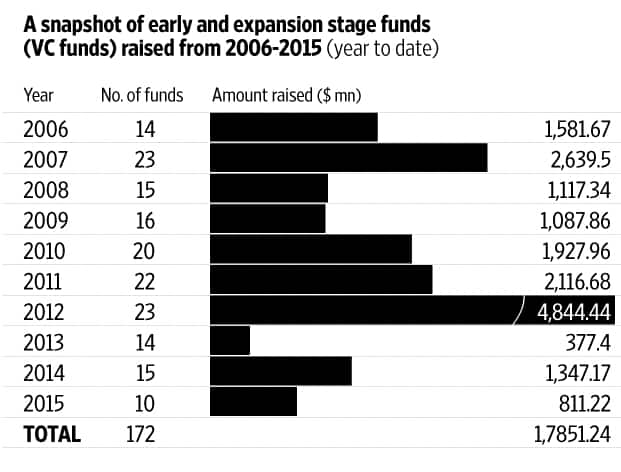 Still, there’s no taking away from what the industry has achieved over the last 10 years, despite the investment frenzy and the mythical valuations that have been built up over the past couple of years.

The most important takeaway from this decade is that investors have been able to return capital to their limited partners.

Compared with their dotcom era predecessors, current generation of venture capitalists have been faster off the block in booking profits on investments and rightsizing portfolios.

The deal delivered an exit to Freecharge’s investors, including Sequoia, who had collectively invested about $117 million in the company. 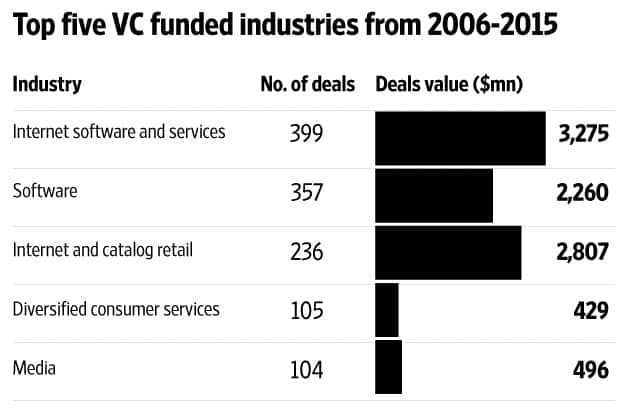 There have been smaller exits, too. In 2013, bus-ticketing platform redBus that was backed by Seedfund, Inventus Capital Partners and Helion Venture Partners was acquired by South African Internet and media conglomerate Naspers Ltd in a reported $135 million deal.

Nexus Venture Partners, one of the earliest home-grown venture capital firms to set up shop, has booked early profits by selling its stakes in more than half-a-dozen companies. 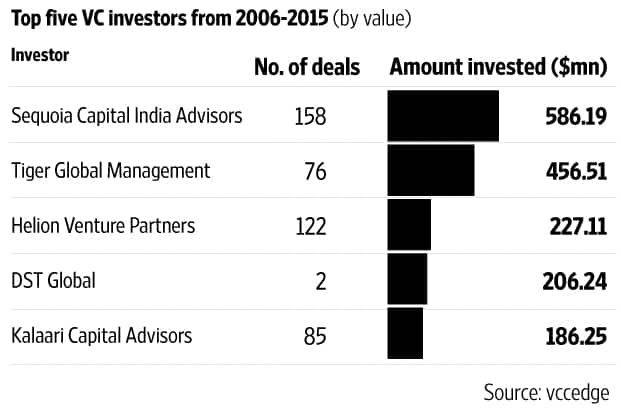 Overall, the venture capitalists have pushed through 238 exit deals worth $4.1 billion from 2007 till date, according to data compiled by the New York-based private equity research and analytics firm Preqin.

The exit numbers look insignificant compared to the quantum of dollars invested, but the fact that investors have been able to show exits periodically has helped extend venture capital’s runway in India to a whole decade.

The coming correction is a cause for concern, but it isn’t likely to undermine the industry’s ability to push through into yet another defining decade.

The next 12-24 months will be tough. There will be more exits, several write-downs, a few large consolidation plays that will hurt the sentiments of entrepreneurs, and fewer active fund managers in the market.

Early-stage investments, however, will not stop. “The best investors in the market will not panic. They’ll just take a step back, reserve capital for the better assets in the portfolio and continue making investments," says Ash Lilani, co-founder and managing partner of Bengaluru based Saama Capital.

Most frontline early-stage investors are sitting on large funds that have been raised recently. A downturn and more realistic valuations may be just the thing they need to seed the next generation of start-ups.

This is the first of a multi-part series on 10 years of venture capitalists investing in India. Over the next few days, Mint will profile some of the most active venture capital firms in the country.