Mumbai: After three quarters of weak sales, Shoppers Stop Ltd, India’s first department retail chain, is reworking its strategies as it sees demand remaining soft for a year to 18 months given the global slowdown.

In the last quarter of fiscal 2012, same-store sales, or sales at shops that were open for at least a year, grew at 10%, driven by a 9% increase in prices and a 1% growth in volume.

In the December quarter, Shoppers Stop’s same-store sales had contracted.

At India’s largest retail firm by revenue, Pantaloon Retail (India) Ltd, same-store sales growth across formats has fallen steadily in the past three quarters, either to low single digits or has contracted. 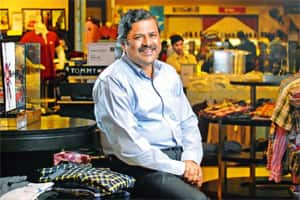 “It looks like the next 12-18 months are going to be uncertain," said Govind Shrikhande, managing director and chief customer associate, Shoppers Stop. “Our belief now is to go back and start working around categories and events that create demand for the long term."

“Consumers are going to remain conscious about their spending for some time to come," said Saloni Nangia, president at Gurgaon-based retail consultancy firm Technopak Advisors Pvt. Ltd, who agrees with Shrikhande that it is a good time for retailers to adjust their strategies and focus on value-driven growth.

With consumers spending less, retail chains like Shoppers Stop are looking for new ways to keep their businesses growing.

This translates into Shoppers Stop reviving events such as the makeover marathon it had previously hosted four years ago. The retailer also wants to add in-house brands—or private label brands that currently include Haute Curry, Live and Stop—as these offer higher margins and faster growth.

“The biggest challenge now is that consumption is still very low," said Shrikhande, explaining that many consumers are still unclear or even wary about using make-up.

According to a December 2011 report by the Associated Chambers of Commerce and Industry of India, or Assocham, India’s per capita cosmetic and toiletries consumption is 40 times lesser than that of Hong Kong, 18 of Japan, 15 of Taiwan, 12 of Philippines and Malaysia and half of China.

The makeover marathon Shoppers Stop hosted in Pune earlier this month drew 1,500 consumers for trial in one day. A similar event held four years ago in Saket, Delhi, got 1,200 participants.

In the private labels category, Shoppers Stop is creating shop-in-shop designs and changing the presentation to those comparable with the other brands sold at its stores.

“Private labels will grow at double the rate of what we will grow overall. So if we are trying to grow overall at 20%, these should grow at 30-35%," said Shrikhande, pointing out that the sales of Haute Curry doubled over last year in May.

Pantaloon, too, plans to focus on private labels and customer loyalty programmes to drive growth, Edelweiss Securities Ltd said in a 14 June report. The retailer is also paring its advertising budget.

Margin within the foods business is likely to improve as Pantaloon, the flagship Future Group firm, undertakes backward integration and gets into manufacturing. It also plans to increase its payback members, a loyalty programme it runs, from about five million now to 10 million by March 2013.

Shoppers Stop scores above rival retailers on efficiency parameters. Its ratio of sales-to-assets was 4.96 for fiscal 2012, more than the 1.12 for the Tata group’s Trent chain and 1.04 for Pantaloon Retail.

Sales-to-assets ratio refers to the number of times an asset has been used to generate sales in a certain period. A higher ratio indicates a more efficient use of that asset.

But challenges such as escalating costs persist. Cost as a percentage of sales increased to 98.25% in fiscal 2012 from 96.25% in the previous year. At Pantaloon retail, this rose to 93.38% from 91.56%. For Pantaloon, finished goods and raw materials costs and employee expenses together accounted for 90.46% of the total cost.

Yet, retailers are not holding back their expansions. Shoppers Stop plans to open eight department stores and two Hypercity stores this year. It is also considering opening a smaller 28,000 sq. ft Hypercity store as compared with the over 50,000 sq. ft stores it operates. Likewise, Pantaloon will add 1.5 million sq. ft of retail space this year, Edelweiss said in its report.

Among the retail stocks, Shoppers Stop outperformed Trent and underperformed Pantaloon in fiscal 2012.