Axis Bank profit up on fee income, growth in loans

Axis Bank profit up on fee income, growth in loans

Shares of Axis Bank, the country’s third largest private sector lender, rose 1.66% to Rs1,012.75 each on the Bombay Stock Exchange on Monday. 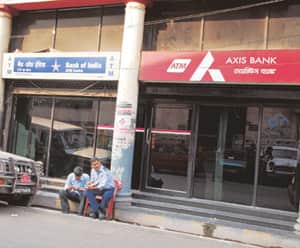 On firm ground:ATMs in New Market, Kolkata. India’s third largest private sector lender posted a 53.5% rise in other income to Rs1,065.58 crore in the second quarter, from Rs694.40 crore a year ago. Indranil Bhoumik/ Mint

Interchange fee is a charge that a merchant’s bank pays a customer’s bank when merchants accept cards using networks such as Visa and MasterCard for purchases.

Fee income from large- and medium-sized corporate credit grew 50%, from treasury by 35%, from business banking by 22%, from small and medium entreprises and agri lending businesses by 16%, and from the retail business by 10%.

The bank’s non-performing loans were at 0.45% of total outstandings, against 0.43% a year ago.

“Asset quality is a cause for concern," said a banking analyst with a Mumbai brokerage firm, who didn’t want to be identified. Still, “despite the rise in non-performing loans, the bank has managed to maintain a healthy net interest margin of 3.52% and cost of funds is down to 5.41% as against 6.08%, which is a positive factor for the bank".

The bank restructured loans worth Rs390.09 crore during the quarter, of which Rs94.13 crore came under corporate debt restructuring. The cumulative value of assets restructured till 30 September was Rs2,363.17 crore, constituting 2.53% of customer assets. Provisions and contingencies rose to Rs498.89 crore, against Rs255.78 crore a year earlier.

“Though the growth in net profit is impressive, the rise in provision cover indicates a possibility of a further rise in non-performing loans," said another banking analyst with a Mumbai-based brokerage firm, who did not want to be identified as he is not authorized to speak to the media.

Sengupta told analysts on a conference call that there was a possibility that some restructured assets could become non-performing loans, the same analyst said.

“We will continue to grow both our wholesale banking and retail banking books. On the retail banking side, we would be aggressive in the mortgages and auto loans," Sengupta said. “We are selective in the unsecured loan business, particularly personal loans. We have been through an economic slowdown and Axis Bank cannot be immune to it. However, we are now seeing signs of recovery."

The bank plans to increase loans to infrastructure projects and has sought Reserve Bank of India’s approval for a non-banking financial company.

This wholly owned subsidiary “will operate in the infrastructure space", Sengupta said. “It will have specialized team focusing on infrastructure investments and financing. It will also do project advisory."