Urban consumers are shifting towards organic foods, which will prompt more firms to cut salt, fat and sugar

New Delhi: Snacks and beverage makers are under pressure to shape up. Mondelez International, which makes Cadbury chocolates, and PepsiCo India are responding to changing consumer preferences by cutting salt, fat and sugar.

PepsiCo India, which sells snacks under the Kurkure and Lay’s brands, said on Wednesday it has cut salt by as much as 15% in its Lay’s potato chips brand to counter health concerns.

“We will see more such companies committing to create well-balanced products with low sugar, salt and fat content," he said. 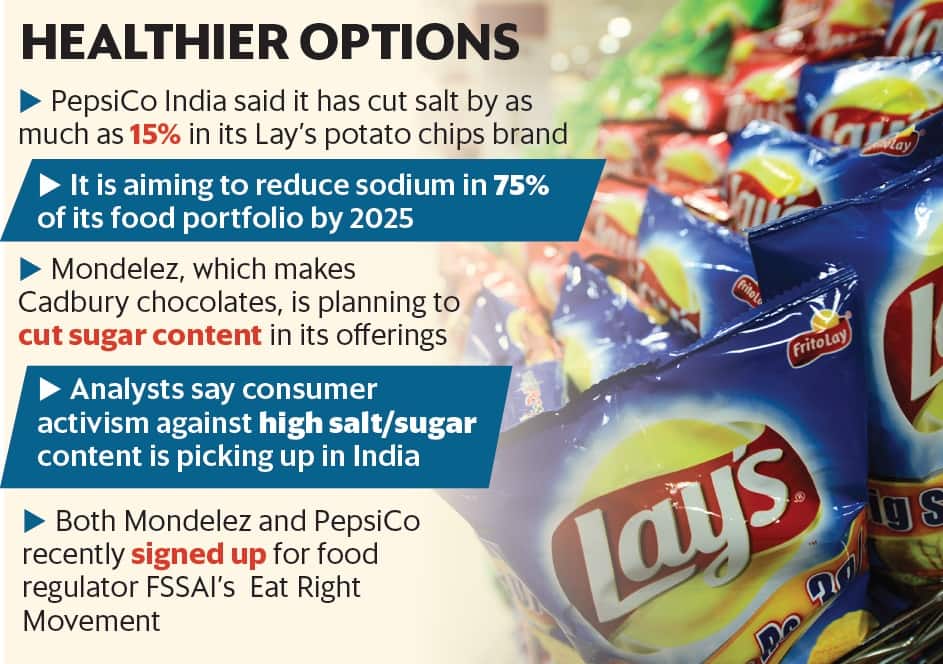 PepsiCo India has cut salt content by 13% in Lay’s India’s Magic Masala variant and 15% in the Spanish Tomato Tango variant, the company said. PepsiCo India introduced a healthier ‘multi-grain’ variant of Kurkure in April this year with 21% less salt content.

“We have reduced 5-25% sodium across popular variants of our snacks flagship brands, Lay’s and Kurkure, and we further aim at reducing sodium in 75% of our food portfolio by 2025," said Jagrut Kotecha, vice-president, snacks category, at PepsiCo India. The firm plans to launch low-fat Baked Lay’s chips in the next two years in India.

Mondelez India, which sells Cadbury Dairy Milk, 5 Star and Perk chocolates, said it is planning to cut sugar content in its offerings. The company, whose chocolate brand Cadbury completes 70 years in India this year, hopes to ride on the increasing awareness and inclination among consumers to buy healthier food and beverages.

“We want to drive balanced indulgence and responsible consumption. In the long term, we are looking at innovations which could offer consumers the opportunity to consume something which has reduced sugar in it," Anil Viswanathan, director, marketing (chocolates), at Mondelez India, said without giving details.

Mondelez said its current focus is to create products, across categories, in formats like Home Treats (bite-sized chocolates across Cadbury, Perk and 5 Star brands) where portion sizes can be controlled.

Both Mondelez and PepsiCo recently signed up for food regulator Food Safety and Standards Authority of India’s Eat Right Movement, along with 12 other firms. They have pledged to cut sugar, salt and fat content and launch healthy products over three to seven years.