Bangalore: The head office for builder Biodiversity Conservation India Ltd (BCIL), one of the winners of this year’s Confederation of Indian Industry (CII) sustainability awards, looks a bit like the grown-up version of a pre-school. Unfinished wood planks serve as desks, and miniature toy models of futuristic residential developments are scattered between them. Plants are tucked into every crevice. 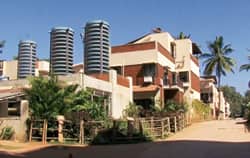 Stone wells that resemble century-old water sources dot the landscape at one BCIL complex in Whitefield, but the wells are hooked up to an underground technology that harvests rainwater and filters. None of the flats has air conditioning units; instead, each relies on a type of fan unit connected to a centralized cooling system.

“For a small company of its size, it is a commendable thing to start," says Suman Majumdar, who oversaw the awards process at CII. “They are creating a completely different USP about the properties that they are developing."

BCIL’s chief executive, Chandrashekar Hariharan, started the company in 1995 as a way to move towards a more “sustainable" model for the development projects he was working on. Specifically, he wanted one that had a separate consumer base and its own source of income.

Following that logic, the idea behind much of what the company does is to reconcile the modern, urban lifestyle with “sustainable" practices that are environmentally sound. “If you keep preaching sustainability, no one will take to it, but if you talk about cuts in energy bills," they will start to listen, Chandrashekar says.

BCIL’s first projects were in Bangalore, but the firm has since expanded into Mysore and Goa. Earlier this year, the company launched a consulting wing named Green Idea Lab, to help individuals and companies implement green ideas, and focus more on “retrofits", or improving existing buildings, rather than starting from scratch.

The firm doesn’t develop its own technology but instead, looks at how it can adapt what already exists to residential communities. “Everything has to come through many iterations," says BCIL project manager Amit Chauhan. “It is technology combined with design."

For the cooling system in the Whitefield development, TZED (total zero energy development), for example, engineers looked at centralized systems more common in commercial buildings, and created something similar for individual flats. While single air conditioners have their own compressors, TZED created one giant compressor and installed a network of devices known as fan coil units to bring cool air into the rooms, using at least 45% less energy, according to Chauhan.

The water system at TZED, too, is entirely off the grid, meaning it doesn’t connect to any city water supply. Sewage water is recycled and used for landscaping. Rainwater is collected in a 400,000-litre tank, and filtered for every other use, including drinking.

Homes are designed to make best use of natural light and to keep air circulating through, minimizing the need for bulbs and air conditioning systems.

Other developers and public officials are trying to learning from BCIL’s successes. A town planner from Rajkot who came to check out the company’s TZED project in Whitefield said he was intrigued by BCIL’s reputation in green building. But if BCIL takes a more holistic approach, Rajkot’s B.H. Rupani is looking for something more basic: anything that can save energy for the residents of his district. “I’m more interested in the technical part," he says. “I have to tell people to implement these things."

BCIL won a separate jury award in this year’s contest, not only for its environmental sustainability practices, CII’s Majumdar says, but also because the company has created an economically viable model out of such products, raised public awareness, and kept stringent safety norms and provided accommodation for its construction labourers in the process.