The acquisition will help Infosys focus more on the important, strategic challenges faced by its clients

Bangalore/New Delhi: Infosys Ltd has agreed to buy Panaya Inc. for an enterprise value of about $200 million— the Indian company’s first major step to execute chief executive Vishal Sikka’s vision to boost productivity by automating tasks since he took charge on 1 August.

The transaction to buy California, US-based Panaya is expected to be completed by 31 March, Infosys said on Monday. The company said it would be an all-cash deal without giving further details. Enterprise value is market capitalization plus debt, minority interest and preferred shares, minus total cash and cash equivalents.

Sikka, 47, who became the first non-founder CEO of India’s second-largest software services provider, has been stressing the need to adopt artificial intelligence (AI) and automation technologies to cut costs, retrain engineers to think like designers and regain ground that the company had lost to rivals Tata Consultancy Services Ltd and Cognizant Technology Solutions Corp.

“It (Infosys) faces multiple challenges, including energizing its client facing roles, increasing utilization, and improving service delivery capability and efficiency of the staff," said Sudin Apte, chief executive and research director at Offshore Insights. “It may address some of these issues with this (Panaya) acquisition, which is very strategic for the company. The automation and AI strategy of Infosys is to bring some non-linearity in the system to increase efficiency and reduce the cost of solution for its clients."

The acquisition “will help amplify the potential of our people, freeing us from the drudgery of many repetitive tasks, so we may focus more on the important, strategic challenges faced by our clients", Sikka said. 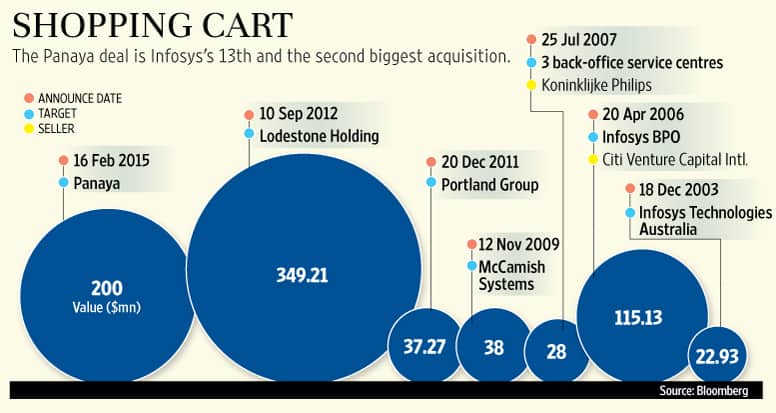 Infosys, under Sikka, and its local rivals are trying to develop technologies and processes that will help them boost revenue without having to add to the company’s employees. Sikka, a former SAP AG chief technology officer, has also promised investors that he will deploy Infosys’s cash reserves of more than $5 billion to buy companies.

So far, Infosys has been extremely cautious about acquiring companies—the Panaya acquisition being the company’s 13th purchase and the second-biggest since inception in 1981. Infosys had acquired management consulting firm Lodestone Holding in 2012, its biggest. Lodestone was then valued at $349 million.

“This was expected given the recent announcements by Vishal on his intent to be focused on acquisitions to help the company make significant progress on non-linear (other than employee-based) growth. The mid-size acquisition allows Infosys to onboard the new IP (intellectual property) without facing any hassles and also prove easier and lighter for the teams to integrate," said Sanchit Vir Gogia, chief analyst and CEO of Greyhound Research.

Sikka is attempting to re-establish Infosys as the bellwether of the $146 billion Indian IT industry, a title it has lost to TCS.

Earlier this year, Infosys expanded its innovation fund to $500 million to invest in young companies innovating in next-generation solutions and technologies such as artificial intelligence, automation and collaboration and design technologies.

On 5 February, Infosys also said it was realigning its organizational structure effective 1 April, to sharpen its competitive differentiation across service lines. Delivery will be structured around seven different service lines across its segments, the company said in a statement.

Software lobby group Nasscom has forecast software exports for 2015-16 would grow between 12-14% to about $110-112 billion, compared with the 13-15% growth estimate for the current fiscal year. Overall revenue for the IT sector is expected to grow at 13% to $146 billion in the year to 31 March.