Home / Companies / Restructuring over, two Bajaj companies to be listed today
Back
Share Via

Restructuring over, two Bajaj companies to be listed today

Restructuring over, two Bajaj companies to be listed today

Bajaj Auto is likely to be listed at ₹ 60 a share, while Bajaj Finserv will likely list at ₹ 77.50 a share, according to an average of listing estimates from four brokerages polled by Mint. At this sort of listing price, the market capitalization of Bajaj Auto is estimated to be at ₹ 0,996 crore and that of Bajaj Finserv at ₹ ,355 crore. On 23 May, the market capitalization of Bajaj Holdings stood at ₹ 6,814 crore. 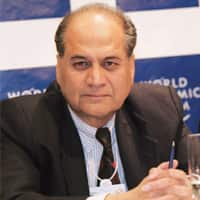 Separate entities: Bajaj group chairman Rahul Bajaj had identified unlocking shareholder value as one of the reasons for demerger.

If the brokerage estimates hold up, the separation of Bajaj’s automotive and financial services businesses is set to unlock an estimated value of about Rs5,123 crore. In the same period, the benchmark Sensex index of BSE has only risen just 5.64%.

Mint has not taken into account the market capitalization of associate company Bajaj Auto Finance Ltd since it has continued trading on BSE and trades at Rs275.25 a share.

Indeed, Bajaj group’s chairman Rahul Bajaj had identified unlocking shareholder value as one of the reasons for separating the firm’s automotive and financial services businesses, though it is also being driven by the need to accommodate the separate corporate ambitions of Bajaj’s two sons.

“Bajaj Auto stock was trading around Rs2,100 before the demerger. Ideally, the combined value of the stocks of the three demerged entities should add up to this price," said Mahantesh Sabarad, a sector specialist at Mumbai-based investment bank Centrum Capital Ltd.

The auto business of Bajaj should be valued at a premium to Hero Honda Motors Ltd’s stock valuations, comparing the bottom line of the two firms, noted the head of research at a foreign brokerage operating in India. He didn’t want to be identified.

This research head, while bearish on the auto sector, where sales especially in two-wheelers have fallen all of last fiscal due to tighter credit conditions, is more positive on Bajaj Finserv. “The plans to start an asset management company may attract higher investor interest in this firm," he said.

Auto analysts say that the demerger of Bajaj group will help in better valuations of the company’s different business comprising two- and three-wheeler manufacturing, life and non-life insurance, vehicle financing and wind power.

“Earlier, it was difficult to put a value on the insurance business when the company was consolidated," said Piyush Parag, an auto analyst with Religare Securities Ltd. “The demerger brings more focus on all businesses."

Bajaj announced the demerger last May, under which the company was split into three entities. The company created two subsidiaries: Bajaj Holdings and Bajaj Finserv.

Its auto business, with all assets and liabilities along with investments in Indonesia and a few vendor companies, were transferred to Bajaj Holdings. It also holds Rs1,500 crore in cash and cash equivalents.

Bajaj is issuing one share each in Bajaj Auto and Bajaj Finserv for every share held in Bajaj Holdings.

“Bajaj Finserv is now a core insurance company with life insurance, non-life insurance and the auto finance business," said S. Ramnath, director, research at IDFC-SSKI Securities Ltd. Ramnath estimates the listing price of Bajaj Auto to be in the range of Rs650-700 a share and Rs700-800 a share in the case of Bajaj Finserv.