Why smart companies want a piece of heartland happiness

Why smart companies want a piece of heartland happiness

New Delhi: Sitting on a cushion in one corner of his 15x20ft shop in busy Seepri bazaar in Jhansi, Shyam Babu Pandey shouts out to an assistant the household items on a customer’s shopping list. Jhansi, best known for the valorous 19th century queen Rani Laxmibai, is a so-called tier-II town in Uttar Pradesh, and for marketeers, it is an epitome of rural India. Expanding network: A shepherd leads his flock past a tea stall that also sells phone recharge coupons on NH-11 near Bharatpur in Rajasthan. Madhu Kapparath / Mint

That he stayed back may have been for the best. A few weeks ago, the son called to say that his company was cutting jobs because of some “aarthik ghotala" (financial mess) in the US and he may be headed back home soon.

The economic downturn that is taking a heavy toll on big city-based companies—from organized retailers and real estate developers to airlines and technology firms—hasn’t had any impact on Pandey’s business, sustained by a loyal base of customers built over the two decades that he has run the shop.

“Most families I cater to have an agricultural background," Pandey says. “While they live in the city (Jhansi) because at least one or more members work either with the government or some private company, their basic income comes from the agricultural land they still own in the nearby villages."

His customers have been a contented lot, happy to indulge themselves of late. They have good reasons: Agricultural production has been rising and a sharp increase in the minimum crop price assured by the government to farmers has boosted household incomes. Those employed by the government have received salary hikes ordered by the Sixth Pay Commission. 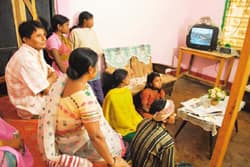 Pandey says his shop will be able to support his son if he were to come back. “Everything is growing here. He can even start a new business here," he says.

Pandey’s optimism does not stem from misplaced pride in his hometown. It’s a phenomenon manifesting itself across the country’s so-called semi-urban and rural markets that are home to a vast majority of India’s billion-plus population.

Watchmaker Titan Industries Ltdopened its third showroom in Salem, a small town in Tamil Nadu, earlier this month. “As a town, Salem is much smaller and has less buying power than Chennai, Coimbatore and Madurai," says Harish Bhat, chief operating officer, TitanIndustries.

The third showroom was opened because the existing two had been clocking double-digit growth over the last year, he says. But what happened on the inaugural day was something the company had not even remotely anticipated.

Titan sold 10 solid gold watches on Day 1. “The inaugural day’s sale…was the highest ever in the history of our retail chain, higher than any opening day’s sale we have seen in any metro, including Mumbai and Bangalore," says Bhat.

The rural growth is in contrast with the gloom in the cities, where consumers are holding on tight to their wallets as the economy grows at the slowest pace in six years and companies freeze hiring and cut jobs. “On average, small towns are growing 5-8% faster than metros," says Bhat.

There are reasons why semi-urban and rural India have remained insulated from the economic downturn.

“The global economic meltdown has underscored the fact that India is not one integrated market much more forcefully," says Rajesh Shukla, chief statistician at the National Council of Applied Economic Research (NCAER). “It is diverse and there are different economic factors that are at play in different markets."

“The factors responsible for pulling down consumption in urban markets such as job cuts, freeze on salaries, increase in liabilities such as EMIs (equated monthly instalments) because of increase in bank interest rates, loss of wealth because of the crash in capital markets and lower returns on investments and inflation, among others, have had no or negligible impact on consumers in semi-urban or rural consumers," explains Shukla.

Bank credit became more expensive last year in the face of a liquidity crunch. The central bank has since sharply lowered policy rates, but commercial bank rates have not kept pace.

According to rural market consultancy MART, at least 70% of the population in these areas lives off farming. Of these, 41% does its own farming and is self-employed, 19% comprises farm labour, and 11% is self-employed in some kind of business related to agriculture. The remaining 30% comprises artisans, non-agricultural labour and salaried people.

The fortunes of this population largely depend on the monsoon, the size of the harvest and the prices the crops fetch. These factors have remained unaffected by the global upheaval.

“People and families in small towns are also not caught up in some of the recent uncertainties (such as job losses and pay cuts) which have impacted consumer confidence in some metros today," says Bhat. Small towns have also not seen the dramatic fall in prices of housing and land that the larger metros are witnessing.

Consumers in smaller towns have, over the past decade, been far more prudent in their investments and borrowings than big-city counterparts, Bhat says. “Small-town India, therefore, has a balance sheet which is far less leveraged than the metro balance sheet, a most fortunate position to be in today."

MART conducted a national study in January to assess the impact of the slowdown on consumer demand between July and December in these markets. The study found that there had been no drop in consumer traffic in retail outlets, and small town retailers had increased their stocks by 20-25% despite a reduced credit period and decrease in credit sales to consumers.

The rural boom, the study indicates, has extended beyond the consumer goods sector. The offtake of consumer durables was found to be encouraging during the study period. Factors such as price cuts announced by durables companies and attractive offers doled out by direct-to-home (DTH) broadcast service providers also contributed to already growing sales of colour television sets, DTH connections and DVD players. According to the study, there are 50 million television sets and nine million refrigerators in rural India and small towns, against 37 million television sets and 15 million refrigerators in urban India.

Telecom is another sector that has seen robust growth in these markets in the past six months. From the trends gathered from the trading community in these areas, the MART study says that because of low entry and recharge costs, telecom services are growing at a much faster pace in semi-urban and rural India than urban India.

C.K. Ranganathan, chairman and managing director, CavinKare Pvt. Ltd, a Chennai-based consumer products company, says rural markets have been growing impressively for the past “several" years. “What is most heartening, however, is that while the urban markets have slowed tremendously because of the global meltdown, these markets have done even better in the past six months than the previous years."

Seeing the growth opportunity in these troubled times, CavinKare’s rival Dabur India Ltdhas “redoubled our efforts to launch small packs and sachets in villages", says a company spokesperson. The company recently introduced Dabur Amla Hair Oil in a sachet priced at Re1 and its health supplement Dabur Chyawanprash in a 100g pack priced at Rs25.

“The rural growth story remains intact. It has, in fact, accelerated," says Sunil Duggal, CEO, Dabur. “We are stepping up focus on sachets and smaller packs to address growing demand in rural markets."

The rural story is also inspiring those who have been sitting on the fences so far to take the plunge.

S. Sivakumar, chief executive of agribusiness at consumer products company ITC Ltd, says there is a renewed surge of interest among a lot of companies in rural India. Sivakumar has spent 26 years in rural India, including eight spearheading ITC’s e-Choupal initiative that aims to link the company directly with farmers for supplies of agricultural products.

“Rural markets saw a secular trend of growth in the past two years and the trend continues even now and this is drawing a lot of interest from those that have remained away from these markets so far," Sivakumar says.