Mumbai: Markets regulator Securities and Exchange Board of India (Sebi) has started proceedings against ICICI Bank Ltd for non-disclosure of information in the matter of alleged conflict of interest in the grant of loans to the Videocon group.

The company told NSE on Friday that Sebi has sent the bank and Chanda Kochhar, its MD and CEO, a notice alleging violation of Listing Obligation and Disclosure Requirements (LODR) and for not making adequate disclosures.

Mint reported on 12 April that Sebi was probing alleged corporate governance and disclosure lapses at the bank.

“The notice has been issued based on information furnished by the bank/its MD and CEO to diverse queries made by Sebi concerning dealings between the bank and Videocon Group and certain dealings allegedly between Videocon Group and Nupower, an entity in which Deepak Kochhar, spouse of MD and CEO (Chanda Kochhar), has economic interests," said ICICI Bank in a disclosure to NSE. 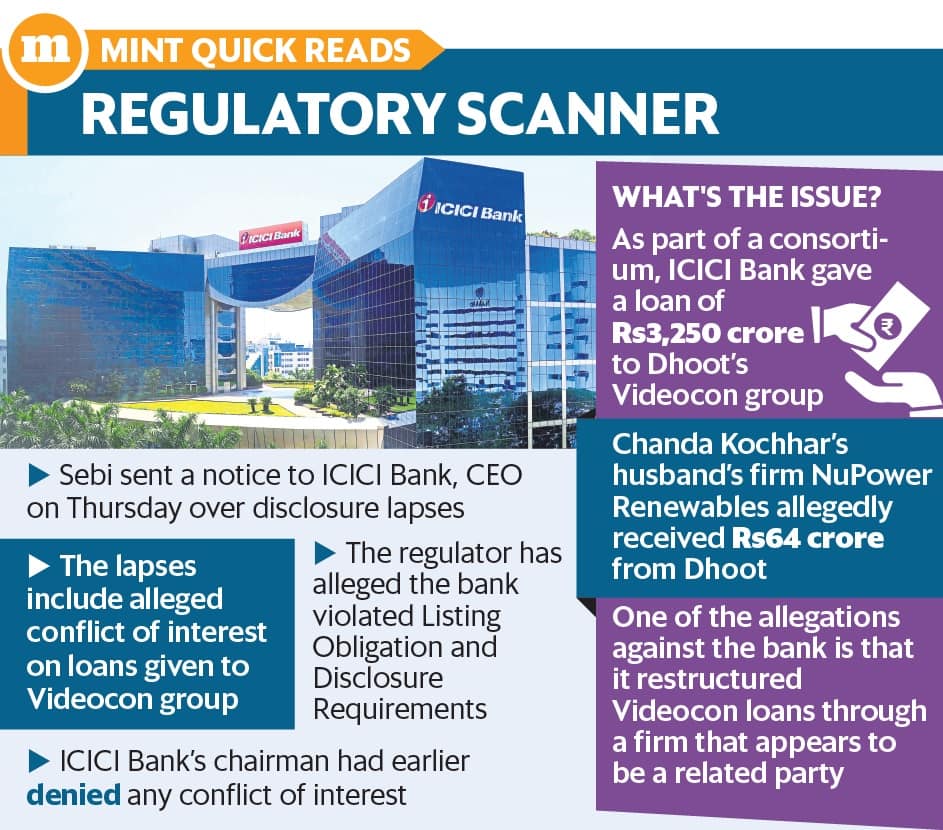 The case pertains to alleged conflict of interest in a Rs3,250 crore loan ICICI Bank gave Videocon group. The amount was part of a Rs40,000 crore loan by a consortium of 20 banks in 2012.

Videocon group promoter Venugopal Dhoot allegedly gave Rs64 crore in 2010 through a fully-owned entity to NuPower Renewables, which he set up with Deepak Kochhar and two of his kin. It is alleged that he transferred proprietorship of the firm to a trust owned by Deepak Kochhar for Rs9 lakh six months after he received the loan from ICICI Bank.

However, M.K. Sharma, chairman of ICICI Bank, said on 29 March that there is “no conflict of interest as Videocon group is not an investor in NuPower Renewables".

J.N. Gupta, co-founder and managing director of Stakeholders Empowerment Services, said the market regulator can seek information if the disclosure is not adequate.

“The moot question is whether the alleged disclosure lapses happened in 2012 when the provisions of LODR 2015 were not notified or do they pertain to some lapses today," said Gupta.

One of the allegations against the bank is that it restructured Videocon loans through a firm that appears to be a related party. In 2012, Related Party Transactions were not defined either by the Companies Act or Sebi norms, but there was a concept of person of interest (to the company management).