Mumbai: Reliance Industries Ltd (RIL) said it would invest in media group TV18’s two main companies, marking a major foray into the media sector by the energy-focused conglomerate and giving a boost to its plans to launch 4G services.

Under the deal, Reliance will put up the money to allow the controlling shareholders of the TV18 group to subscribe to rights issues in the two firms, Network18 Media and Investments and TV18 Broadcast Ltd.

In return, India’s biggest listed company will get preferential access to content from TV18 group, which would be distributed through the 4G broadband network it is setting up. 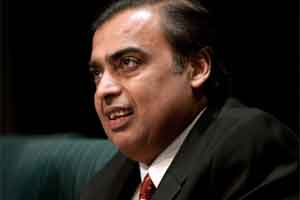 Reliance, controlled by Mukesh Ambani, Asia’s richest man, did not disclose the size of its investment.

But TV18 said in a separate release that interests associated with group founder Raghav Bahl would contribute Rs1,700 crore ($320 million) to the rights issues.

Bahl will retain management and majority control over TV18 and Network 18, the statement said.

A trust set up by Reliance will subscribe to convertible debentures that will be issued by Bahl interests.

A Reliance spokesman declined to comment on how much of a stake the company would eventually hold in the issuing entities.

“Reliance is cash-rich and has been looking for new businesses to put money in. TV18 group has been bleeding money, so getting in an investor will definitely help them," said K.K. Mital, head of portfolio management services at Globe Capital.

The deal also calls for Reliance to transfer most of its stake in unlisted regional broadcaster ETV and most of its channels to TV18 Broadcast for Rs2,100 crore ($395 million).

Network18 and TV18 announced earlier that their boards had approved a rights issue to raise Rs4,000 crore, after adjusting for Network 18’s holding in TV18.

“This gives TV18 group a fresh lease of life," said a sector analyst at a foreign brokerage. “This deal also works out for Reliance as it was stuck in the investment in ETV and they could not have monetised it better."

The TV18 group, saddled with mounting debt caused by a slowdown in spending on advertising, is not profitable.

Reliance has been looking to diversify as growth in its core oil and gas business slows.

The company, which has also invested in retail and financial services, made a dramatic return to the telecoms sector in 2010 by taking control of the only firm that won wireless broadband licences across India, and is now preparing to launch services.

Worries about declining output at its gas fields off India’s east coast helped to drag down Reliance’s share price by more than 30% in 2011, contributing to a near 25% fall in India’s main stock index.