Home >Companies >People >Jeff Bezos adds as much as $6.6 billion to fortune on Amazon results

Jeff Bezos adds as much as $6.6 billion to fortune on Amazon results

The fortune of Amazon founder Jeff Bezos surged by as much as $6.6 billion in extended trading on Thursday after the retailer reported Q3 results that topped Wall Street estimates

New York: The fortune of Amazon.com Inc. founder Jeff Bezos surged by as much as $6.6 billion in extended trading on Thursday after the retailer reported third-quarter results that topped Wall Street estimates.

If the gains hold through tomorrow, Bezos probably will overtake Microsoft Corp. co-founder Bill Gates atop the Bloomberg Billionaires Index, a daily ranking of the world’s 500 richest people. Amazon climbed 8.5% to $1,055.01 at 4:30pm in New York. 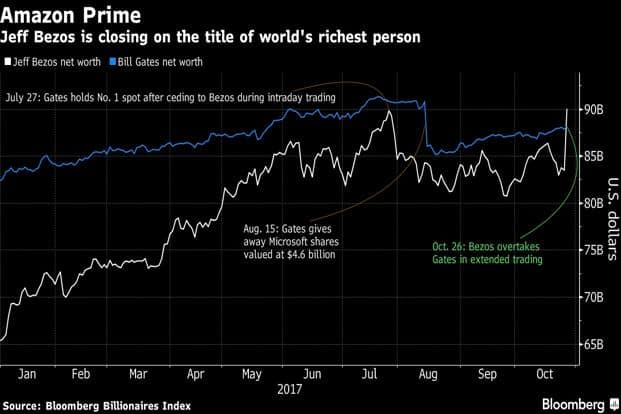 Gates ended on Thursday with a net worth of $87.9 billion, about $4.5 billion ahead of Bezos. Gates has been the world’s richest person since 2013, though he briefly slipped behind Bezos during intraday trading on 27 July. Gates ended that day on top.

Bezos, 53, has added $18.1 billion to his fortune this year, an increase of 28%. Gates’s net worth rose by $5.56 billion, or 6.7%, even after he donated $4.6 billion of Microsoft stock to the Bill & Melinda Gates Foundation in August. Gates, 61, has given away almost 700 million Microsoft shares and $2.9 billion of cash and other assets since 1996, according to an analysis of his publicly disclosed giving. He would be worth about $150 billion if he hadn’t made the donations. Bloomberg