Why Carlos Ghosn is fond of ‘jugaad’

New Delhi: Carlos Ghosn wants to take back more than just entry-level cars from India. What he really wants in his bag is a peculiar Indian way of life, a mindset he believes is the code to crack emerging markets.

He’s mentioned it more than a few times now and even sent a senior executive to India to imbibe the idea of jugaad—essentially grassroots improvization but now an Indian management concept that’s come to mean an innovative fix for just about anything.

Ghosn, the global chief executive of the Renault-Nissan alliance, recalls when back in 2009 he was struggling with developing an inexpensive pick-up truck for India because the cheapest prototype he had was still too costly for the local market. 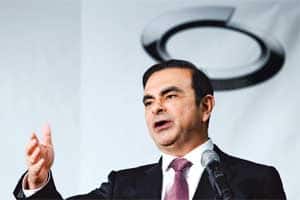 “Look, we want to bring in a product in pick-up truck, which is a large segment. But we don’t know how to do it," Ghosn told him. Sumantran asked to see Nissan’s older products. “I said, why not?" Ghosn said. Innovative improvisation: The Tata Nano assembly line (above) in Sanand, Gujarat. Engineers at Tata Motors took various initiatives such as not having an analog odometer and a tachometer to cut production costs. (Abhijit Bhatlekar/Mint)

Ashok Leyland engineers in India developed the low-cost pick-up truck Dost without any collaboration from Renault-Nissan. Launched in September last year, Dost already has a 20% share in the light commercial vehicle segment that’s dominated by Mahindra and Mahindra Ltd’s Bolero pick-up truck. Dost so far only sells in seven states.

The Ashok Leyland-Nissan joint venture now plans to introduce Dost in emerging markets in South-east Asia and West Asia. It also plans to introduce a multi-utility vehicle and another light commercial vehicle on the same platform.

Renault-Nissan is beginning to apply the jugaad concept of frugal and innovative engineering as it develops small cars in India that it wants to take to other emerging markets as well, such as Brazil, Indonesia and South Africa.

Nissan sells the Micra small car in India and Renault recently launched the Pulse hatchback but both are not in the mass market entry-level segment that Ghosn wants to be in.

Last year, Ghosn dispatched Gérard Detourbet, a senior executive in Paris who was in charge of Renault-Nissan’s entry-level cars, to India. From his new base in Chennai, Detourbet will lead the development of an entry-level car that will be priced at around ₹ 3 lakh. When Detourbet returns to Renault-Nissan’s headquarters in Paris, Ghosn expects he will take with him the jugaad mindset.

“We don’t go to emerging markets to just bring back a product, but to learn something—like new processes or a whole new mindset," Ghosn explained in the panel discussion.

The original jugaad is a Hindi reference to scrappy vehicles put together in the villages and small towns with diesel irrigation pumps as engines. These are inexpensive but sturdy enough to transport anything from farm produce to cattle or people. Eventually, the term has come to represent a management fad for frugal, ingenious improvizations—a work-around.

In the past decade, such frugal engineering has changed the face of Indian manufacturing with innovations such as General Electric Co.’s portable ECG machine developed in India that can be taken to remote villages, or the ChotuKool (an inexpensive replacement for a refrigerator for rural consumers).

“As a country, we have always had shortage of resources and we learnt how to manage in those conditions. That’s when the concept of jugaad emerged and got embedded in our management processes," said B. Ravi, institute chair professor at the Indian Institute of Technology, Bombay. “But remember, this term also has a negative connotation, which means doing things in an unorganized manner. The best way to describe it is to find a solution of problem by keeping checks and balances in place."

The reason for the West’s sudden focus on the frugal engineering that jugaad stands for, he said, is because those countries have been beaten by the Chinese and Japanese and the only place they can learn the concept from is India. “Because the concept of jugaad has more to do with cultural and social aspects and these aspects are not replicable in the Western countries."

Ghosn, like many auto makers, understands that the next phase of growth for global auto firms will come from emerging economies and not from the developed markets, and that it is imperative for companies to modify their manufacturing processes to suit their requirements.

India is the second-fastest growing auto market in the world. Its passenger vehicle industry grew at 13.04% to about 1.27 million units between January and May, according to the Society of Indian Automobile Manufacturers.

Ghosn realized during a discussion with some of his Indian counterparts that it was important to understand the mindset, creativity and the processes their companies adopt to create cost-effective products. “I was discussing with some of our Indian competitors about how much money have they spent on developing this product," Ghosn said at the discussion without naming the product. “We thought they have missed a zero or a two in the investment figure because our investment was in the ratio of 1:100."

In the case of Dost, too, cost was a challenge, Sumantran said. “We took a lot of tactful decisions. Instead of a 4-valve common rail, we decided to go for a 2-valve engine," he said. “What helped in cutting cost further was to have a 3-cylinder engine instead of a 4-cylinder. So, while we had an existing platform, we had to do everything from scratch…right from engine, powertrain and transmission."

The company also decided to reduce the weight of the vehicle so the 3-cylinder, 2-valve engine could suit its overall mass.

“I was talking to Gordon Murray, the famous F1 designer for McLaren, some years back," recalled Sumantran, who was also associated with the development of the Nano during his stint with Tata Motors Ltd. “He told me how he has been saving cost by shaving the mass of the car and once you are able to do that then with right design and architecture will lead to mass savings."

Experts point out that in India over-pricing cars due to some unnecessary features only puts off buyers.

“It is not only about burdening your customers with feature-loaded cars," said I.V. Rao, chief operating officer (engineering), Maruti Suzuki India Ltd, the country’s largest auto maker. “The difference is we (in India) conceive things for very less volumes and for a particular market. Since they (foreign car makers) cater to a larger market and more countries, they have to mitigate a lot of risks."

Fiat SpA, for example, has a fully automated plant for engine development, Rao recalled from one of his visits to Italy. “They are also ready with Plan B if automation fails and they also have alternative for Plan B. So when you have such high risk-mitigation in mind, the cost is bound to go up."

Tata Motors’s budget car, the Nano, offers a template for frugal engineering. Chairman Ratan Tata’s ambition was to build the world’s cheapest car. For his engineers, developing a car that will be priced at about ₹ 1 lakh wasn’t the only challenge, it also meant re-orienting the company’s entire process.

“The good part about it was the initiative taken by company’s managing director Ravi Kant in 2001 to decrease company’s cost of production," said a New Delhi-based vendor associated with Tata Motors’s production division the past 15 years. “But a tougher job was to put a concept together. The first thing that they realized was that they were not going to make a car and that’s when most of the problems were sorted."

Developing the Nano with a car in mind would have cost the Tatas more than the actual cost of the project.

The engineers took inspiration from three-wheelers. Work on the project began with catering to the needs of a two-wheeler buyer or a person who travels in auto-rickshaws.

“The company took a conscious decision of not having an analog odometer and a tachometer, realizing that the customers in that target group may not find them useful," said the vendor, requesting anonymity. The Nano has a speedometer mostly seen in motorcycles and a digital odometer.

“We went ahead with the project knowing that the people are ridiculing us. We knew, if we succeed, that people will praise us but we also knew that we may fail and we should have the ability to digest that failure," said a Tata Motors official, also declining to be named.

When Renault decided to sell its cars in India on its own, Ghosn was clear that he was entering the country also so that Indian engineers and managers could teach the Renault team the art of frugal engineering, or jugaad.

Ghosn’s previous ventures in India haven’t been very successful. Renault’s alliance with M&M for the Logan sedan went sour as the car was perceived to be expensive and the partnership ended in 2010. Renault-Nissan has a partnership with Bajaj Auto Ltd for a small car, but the alliance’s role is now restricted to marketing, leaving Bajaj in-charge of the design and manufacturing.

“Those (foreign) companies have gone through various processes over the years and have made various products catering to a particular market," said Pradeep Saxena, executive director, TNS Automotive, a research firm. “Now that they make global products, which includes (products for) developing countries, they want to change their process because the percentage of volume from developing markets is going to be higher. Till now, volume was not justifying them to do that."

An email sent to Renault India spokesperson for comments on the story last month did not elicit any response.