The renewal of the TCS-Nielsen deal is seen as a shot in the arm for Rajesh Gopinathan who took over as CEO in February from N. Chandrasekaran, now chairman of Tata Sons

The deal marks the renewal of TCS’s engagement with Nielsen, which first awarded a $1.2 billion, 10-year contract to the Mumbai-based company in 2007. In 2013, the deal size was more than doubled to $2.5 billion and extended by three more years until 2020. 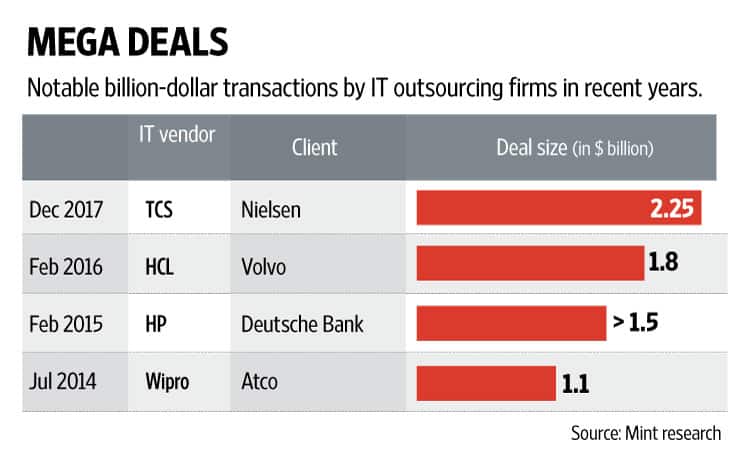 The renewal of the deal is considered a shot in the arm for Rajesh Gopinathan, who took over as chief executive officer in February after his predecessor N. Chandrasekaran was appointed chairman of Tata Sons Ltd, the group holding company.

Nielsen’s outsourcing contract has been extended for five years until 2025 even as the rating firm has committed to spend more on buying services offered by TCS for the remaining four years of the earlier contract.

“The term of the Agreement has been extended for an additional five years, so as to expire on December 31, 2025, with three one-year renewal options granted to Nielsen," said the Nielsen statement. “In connection with the entry into the Agreement, the parties have agreed to terminate the separate Global Infrastructure Services Agreement between them as of the Effective Date and include the services provided thereunder in one or more Statements of Work (‘SOWs’) arising under the Agreement. TCS will globally provide Nielsen with professional services relating to information technology (including application development and maintenance), business process outsourcing, client service knowledge process outsourcing, management sciences, analytics, and financial planning."

Since TCS’s ongoing contract has also been changed, it is not clear how Nielsen’s renewed partnership will impact the IT firm’s revenue and profitability.

“From a business perspective, there are no two ways that it is a good deal," a Mumbai-based analyst at a domestic brokerage said on condition of anonymity. “It is not easy to know with certainty the financial impact of all multi-year contracts, unless clearly outlined by a company. But even if we assume the earlier deal came with an average $250 million ACV (annual contract value), although revenue recognition varies with every year, TCS getting $320 million in ACV in the first few years means a gain by $70 million or say at least a 40 basis points positive impact on growth." A basis point is one-hundredth of a percentage point.

TCS declined to comment for this story, citing client confidentiality, and also because the company is in a silent period before it announces its third-quarter results on 11 January.

TCS, which reported 6.2% dollar revenue growth to end with $17.6 billion in revenue in the year to March 2017, needs at least $88 million in incremental revenue to better its growth by 50 basis points.

Nonetheless, TCS’s Nielsen outsourcing contract is significant as large outsourcing deals are shrinking both in value and duration, as companies ranging from banks to retailers cut their budgets to maintain back-end technology and plough the savings into work that can help them improve their business operations.

For this reason, a few analysts were jubilant.

“This is a milestone contract given not only the depth of the contract but also the breadth of services," said Ray Wang, founder and CEO of Constellation Research, a technology advisory firm. “TCS did a good job of managing longer-term costs and gaining some cost efficiencies while renewing a longer contract. There is also upside in the long run as this is more of a strategic partnership than outsourcing contract."

Typically, IT firms take 15-18 months to close outsourcing contracts valued more than $1 billion, and for this reason, executives believe much of the work at TCS for retaining this contract happened under Chandrasekaran’s watch.

Still, Gopinathan, in his 10-month stint as CEO, has steered the company well, as TCS has retained all its senior executives even as business continues uninterrupted, leading many to believe that the change of guard at TCS has been one of the smoothest management transitions at an Indian corporate entity.

“This is a good reseal for Rajesh and gives him breathing room to concentrate on some other mega deals in the pipeline," said Wang.