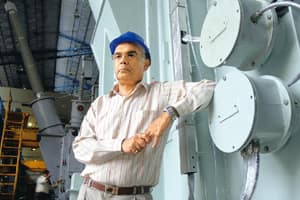 Concerned by the “kneejerk reaction", the board proposed a buy-back at Rs170 per share, a handsome premium of 70%. It was aimed at bolstering investor confidence and give an exit to those who had been fretful of the move.

For CGL, it was a sound investment that would help it diversify into the related field of power generation, a potentially lucrative business in a country perennially short of electricity, as it attempts to cross $8 billion in revenues by 2015 and close the gap with global peers such as Siemens AG of Germany.

CGL minority shareholders perhaps had a reason to react like they did. In mid-December, Satyam Computer Services Ltd proposed the $1.6 billion acquisition of Maytas Infrastructure Ltd and Maytas Properties Ltd, promoted by the family of founder-chairman B. Ramalinga Raju.

An investor backlash forced Satyam to reverse the decision hours later. On 7 January, Raju confessed to having doctored the books of the company for several years to the tune of Rs7,136 crore, triggering India’s worst corporate governance scandal.

“Just because Satyam happened, you can’t put every corporate in the Satyam basket," said Trehan. “Satyam made investors understand us wrongly." The confidence of shareholders was restored only when they realized that the Avantha Power stake was being purchased at book value and after CGL offered to buy back shares at a premium. Not a single share had to be bought through the buy-back. CGL shares soared, and on Wednesday gained 5% to Rs290.25.

The Avantha investment is the start of a “fourth vertical" for CGL in the power sector, Trehan said.

“We are wetting our feet. It is a running company generating 165MW of power and the investment was made at a book value of Rs11 per share. The markets understood...the valuation was good," Trehan said.

Trehan is betting that power shortages, a chronic phenomenon in India where demand always stays ahead of supply, will persist for at least the next 10-15 years.

“No way is this country going to be self-sufficient in power," he said. “Any company entering the power sector has a window of 6-8 years to make good money."

A research report by Chirag Muchhala of Jaypee Capital Services Ltd mentions that the peak power deficit, at 16.6%, is at a multi-year high. With demand for power expected to grow at 8-10% annually, power supply will face even greater strain.

Trehan says this is as an opportunity waiting to be tapped. And investing in power makes sense for Crompton because it is a field related to its main business, he says.

“We understand power. We supply equipment to power companies. There is a knowledge within the company on power," Trehan says.

Avantha Power, by virtue of the equity infusion by CGL, has managed financial closure for its 600MW power plant in Korba, Chhattisgarh. The Rs2,850 crore Korba power project tied up Rs2,135 crore of financing, with the balance Rs750 crore infused as equity, making up a debt to equity ratio of 3:1.

Avantha is, however, not resting on one project alone. In the near future, it will look at setting up another 600MW power generation facility in Korba, and two plants of 600MW in Jhabua in Madhya Pradesh.

For the funding of the new projects, the company will approach private equity investors, among others.

“We have the option to invest more, but we will like to maintain our (CGL) stake at 26%," Trehan added.

Analysts tracking CGL are, however, concerned over the diversification.

“Though the investment by CGL was made at book value, it has raised investor concerns as the shareholders’ approval was not taken for the same," Angel Broking analyst Puneet Bambha wrote in a 12 June report.

“Nevertheless, post CGL’s investment, the Korba project has made good progress... Thus, going ahead, we believe that developments on the Avantha Power front would be closely observed by the investor community."

Muchhala of Jaypee Capital wrote in his 30 May report: “We believe that such non-core investment was made in order to enable the Korba project to reach financial closure as banks disburse funds in proportion to equity contribution."

Trehan, 62, who joined CGL as a management trainee in 1972, took charge as managing director of the company in difficult times. Costs had spiralled and the company diversified into unrelated businesses including manufacturing telecom equipment.

Under him, the company cut its workforce from 10,800 people to 5,800, and slashed several rungs from the management tier. There were 18 levels to reach the CEO’s position that Trehan and his team halved to nine. By 2002, the restructuring enabled the company to return to profit.

CGL is present in the same segments as vastly bigger European firms such as Siemens, ABB and Areva T&D.

In a bid to bridge the technological gap and get a foothold in the developed markets of Europe and the US, CGL made four acquisitions in four years. Muchhala’s report says the company was valued at a steep discount to its peers before issues such as technology gaps were addressed.

The acquisitions helped. In a span of four years beginning 2005-06, CGL revenue expanded at a compounded annual growth rate of 44.8%, aided primarily by surging domestic demand coupled with contributions from overseas.

“The domestic businesses at CGL grew in the last four years at a healthy pace of 25.8%," said Trehan. “ABB, Siemens and Areva...none of them have grown at 25% in recent years."

“There’s no comparison, but as we grow faster by 2015, in six years time we will be $8 billion," Trehan said. “That will be a respectable size to compare with our global peers. Today we are small."

With annual production of 30,000 transformers, it has so far sold almost 600,000 transformers. Ganz, the Hungarian manufacturer of sub-stations and switchgears, was acquired for Rs200 crore.

“The right time (for acquisitions) will be six months down the line," Trehan said. The company is eyeing opportunities in power production and industrial automation.

Back home, the company has funds to invest in its existing businesses even post the Avantha investment and earmarked a capital expenditure of Rs250 crore for fiscal 2010.

“We are a debt free company. When we have to grow, we have enough cash, and the balance sheet is debt free to enable us to leverage it for growth, anytime we want to," Trehan said.