Mumbai: It can’t get any cheaper. Major Indian low-fare airlines have slashed fares by at least 30% to beat the lean season.

From June to mid-October, it is lean season for airlines, while the summer quarter of April to June is peak travel season as schools close for holidays.

“We have noticed that fares have come down by 25-30% on most routes compared to just one week ago! The end of the summer holiday season is in sight now, so demand had started to cool off in the last week. Airlines are attempting to fill up the low-season inventory of July and August in advance," said Aloke Bajpai, chief executive officer and co-founder at travel meta search engine ixigo.com.

India’s second-largest low-fare airline SpiceJet Ltd had announced a promotional sale under “monsoon bonanza sale" with fares starting from ₹ 444 for its non-stop and via flights on its domestic routes.

SpiceJet has announced a promotional one-way base fare of ₹ 444 for its Jammu-Srinagar, Ahmedabad-Mumbai, Mumbai-Goa, Delhi-Dehradun and Delhi-Amritsar routes.

The five-day sale launched on Wednesday will be open till the midnight of 26 June, SpiceJet said.

The travel period covered in this sale is 1 July to 30 September. 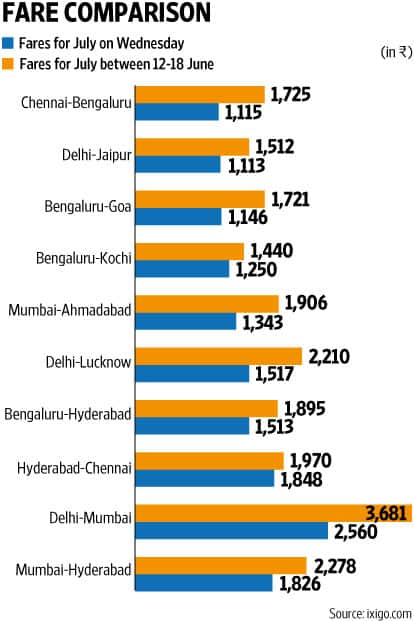 India’s largest and most profitable airline IndiGo, run by InterGlobe Aviation Ltd, too has launched a similar promotional fare for the same travel and booking period.

IndiGo, on its website, said the promotional fares start at ₹ 789, all inclusive.

According to John Nair, head, business travel, Cox & Kings Ltd, the deep discounts offered by low-fare carriers are aimed at stimulating demand during the low season as summer rush has just got over.

“Bookings for travel for the next three months will be 25% cheaper. However, if you try to book these fares for the last quarter of this year the fares are still very high," Nair said.

Though travel agents are confirming cheaper fares, passengers’ lobby group Air Passengers’ Association of India (APAI) wrote to aviation regulator Directorate General of Civil Aviation (DGCA), asking if the regulator was planning any action on such “bogus" schemes by airlines.

“We strongly believe that these are nothing but gimmicks and gullible passengers are being taken for a ride in the name of such low-fare schemes," APAI founder and national president D. Sudhakara Reddy said.