New Delhi: He’s held a total of seven designations, including chief executive officer and managing director of various divisions, in his 26-year career with the Penguin Group-currently the largest trade book publisher in the world.

After being forced to resign from the publishing house from his post in Toronto last June following allegations of sexual harassment by a colleague, David Davidar announced a new literary publishing firm last week. Davidar is partnering with Rupa Publications India to launch the Aleph Book Company, which will be headquartered in Delhi. While there is industry speculation that Ravi Singh, former editor-in-chief at Penguin India, will join Davidar, no formal announcements have been made.

Davidar has edited or published authors such as Vikram Seth, Arundhati Roy, Rohinton Mistry and Salman Rushdie. Starting off as a magazine journalist in Mumbai, he did a publishing course at Harvard before returning to set up Penguin India in 1985 at 26. 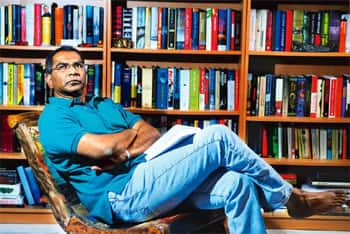 Success mantra: Davidar says for any book to succeed, a deep understanding of the market and an effective distribution network are essential.Photo by Pradeep Gaur/Mint

He’s somebody I like a lot. He was a poet, an essayist, a novelist; he did all kinds of things. There are few writers who can move seamlessly between formats and genres like he did. I named my company after his famous short story, The Aleph. And I learnt recently that Paulo Coelho has a book called The Aleph coming up—also inspired by Borges.

Do we need another publishing house in India?

Amongst all the English language book markets, India is the only one that is growing at close to 10% every year. I believe there’s definitely room for another publisher of high-quality literary fiction.

How did the partnership with Rupa come about?

After I quit Penguin, I was approached by eight or nine groups. Some wanted to know if I’d be interested in running their company; others wanted me to start a new imprint. But starting my own company seemed best, mostly because it will allow me to provide an assurance to authors who want to build their careers with one editor. There was also the fact that some of my most enjoyable days in publishing were the early years in Penguin, when it was a small company with manageable lists. It was the period when gems such as Vikram Seth’s Suitable Boy and the genesis of Suketu Mehta’s Maximum City came about.

Rupa Books India is the majority shareholder and the sole investor. I partnered with Rupa for a specific reason: No matter how excellent the editorial and marketing capabilities of a publishing company, for any book to succeed, a deep understanding of the market and an effective distribution network are essential. Rupa has an excellent relationship with retailers nationwide and it penetrates second- and third-tier cities.

For now, Aleph is a one-man team: I’m the managing director and commissioning editor. We’ll soon hire a marketing team and more editors. I’d be using Rupa’s sales force. We’re looking at publishing upwards of 20 books by the end of 2012.

You believe distribution is the most important aspect of the publishing industry?

Especially in India, and especially right now, yes. There are several things that go into making a book successful. It has to be a ‘good’ book, you have to get the design and packaging right, you have to have the marketing break at the same time that the book hits stores. It can be difficult to do that day in and day out. When you’re a publishing house with an in-house distribution network, you have the benefit to oversee these systems and processes. The biggest challenge in my couple of decades in publishing has been to have my books available at the right place at the right time. This is crucial for India, where online selling (on Amazon or Flipkart) and ebooks (the iPad or Kindle) are still a minuscule part of sales. It’s still traditional paper books selling through traditional bookstores.

What sort of books do you want to publish with Aleph?

Primarily, high-quality literary fiction. I’m also on the lookout to commission non-fiction—journalists, academics, first-time writers, bloggers. A big chunk of what we want to do in the future is digital books. And I don’t mean digital versions of paper books. I’m interested in animated digital books—especially children’s books—in the next three-five years. That’s the beauty of a start-up. You can try anything because you have no legacy issues.

How do you decide on what books or authors to take on board?

A friend in publishing had told me it takes him 10 seconds to decide. It might sound brutal, but what it means is when you’ve been in the industry long enough, you know exactly what will work for you. I give a first-time author three chapters. If it doesn’t grab me by then, I don’t read further. Debut authors don’t have sales records. The first three chapters are their best shot.

You come from the first batch of big-ticket English language publishers in India. What are the major changes you’ve seen from when you started in 1985 and now?

When we started Penguin India, there were no other publishers to compete with. Now, there are about half a dozen. The competition—the fact that authors now have choice—is a big shift. Marketing and distribution channels have changed. Literary agents have entered the scene. The press coverage for books has remained the same though.

There are too many subjective parameters at work. The entire process is subjective, starting from the writing. Why does a writer write a certain way? Why does a publishing house pick a certain book? A publisher has X funds to divide among Y people and he cannot divide it equally. He makes allocations based on projections. These projections come out of experience and analysis, but they’re subjective nevertheless. It’s based on too many variables.

What has been your one concrete truth then?

Someone asked me for a mantra once and I remember saying that it comes down to publishing ‘good’ books. You can’t sell substantial quantities of a bad book. I’m careful about this distinction because snobs equate bad books to commercial books. That’s unfair. It’s important to judge books within their category.

So Chetan Bhagat’s books are ‘excellent’?

Yes. Within their category. He writes briskly and tells a good story, which are the basic tenets of commercial fiction.

Tell us about Ithaca

It’s set in the world of publishing. It starts off in Bhutan, and travels to London, Delhi, Toronto, Frankfurt. There are publishers, editors, authors, reviewers, translators…good authors, bad authors, misbehaving authors, frustrated authors… There have been books on medicine, journalism, banking. But there hasn’t been a novel on publishing. I wrote it over two months, after I quit from Penguin. It’s not a biography, though.

How does it feel to leave Penguin? It’s been your entire career in publishing so far.

While the circumstances of my departure were unfortunate, after the initial shock, I told myself it was the end of a long chapter. I would have left eventually, maybe in three-five years if the allegations hadn’t taken place.

Any last words on the sexual harassment controversy?

Yes, succinct last words. I made a detailed public statement that’s up on the Internet for anyone to see.?I countered the allegations on specific grounds. I have nothing to say beyond that.