Many hurdles remain in the Fortis-Manipal deal to create India's largest hospital chain, but Ranjan Pai is not ready to give up on the acquisition

Mumbai: In the board room of TPG Capital in Mumbai on 27 March, the meeting had been going on for more than 10 hours.

In attendance were management teams of Fortis Healthcare Ltd and a combine of Manipal Health Enterprises Pvt. Ltd and TPG Capital, stitching together a merger that would create India’s largest hospital chain.

Around 11am, a press announcement was made: The Manipal-TPG combine will acquire the hospital assets of Fortis in a two-step transaction.

Around midnight on 27 March, Ranjan Pai, chairman of Manipal Group, finally heaved a sigh of relief. 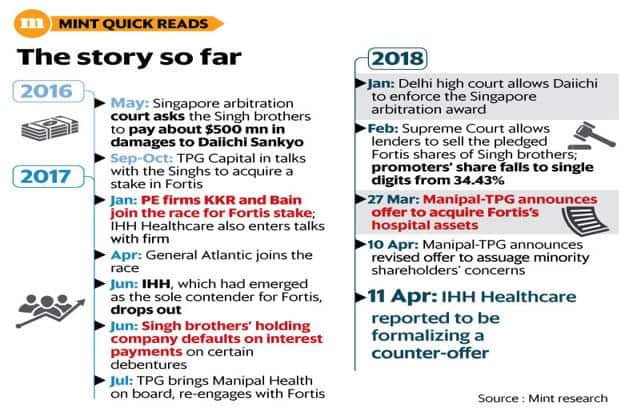 The 16 professionals (eight from either side) closeted in the room that evening were in the final stage of the deal that had been in the works for more than 18 months, with A-teams of Fortis, Manipal and TPG Capital spending many sleepless nights ahead of the deal. However, given the complexity of the deal and the various external factors, even as both sides achieved a big milestone in the form of signing the definitive agreement, premature celebrations were avoided. “The day we made the announcement, all I did was take a good night’s rest. Nothing else," recounts Pai.

But only if that good night’s sleep had lasted long enough.

Within 10 days, Manipal-TPG had to come up with a revised offer to sweeten the terms and allay the concerns of Fortis shareholders.

Fortis shareholders had been unhappy with the structure of the original deal and the pricing. “Investors told us that what they don’t like about the deal is the structure and the price. Their third point was, you are putting too much of money at this value, which is a depressed value; you should either put less money or allow us to participate. We have taken all those three points and we have addressed that," Pai said.

If anything, the revised offer has brought into spotlight TPG Capital’s relentless pursuit of Fortis. “Some 18 months ago, we realized that if you have a combination of pretty toxic cocktails where you had the Daiichi litigation combined with the fact that the brothers had pledged almost entire equity with the lenders and the financial duress would actually overwhelm them. So, a few months before the deal actually became tangible or real, we thought it is worth having a discussion," said Puneet Bhatia, managing director, partner, and country head for TPG Capital India.

The various challenges at play in the transaction meant that even the first offer was achieved after multiple revisions, recounted Bhatia.

“When we were on the verge of signing the deal, my team sent me an update on the financial model and also the PowerPoint presentation, which said ‘version 334’. So as you can imagine how many alterations the deal has gone through," he said.

The global private equity firm had been in discussions with promoters of Fortis several months before they decided to take Manipal along and make a joint bid.

“TPG Capital approached us with the offer in July last year and asked if we would be keen on the deal if all aspects are taken care of. Earlier, TPG’s negotiations with Fortis had fallen through and this was the second time they were on the negotiation table," Pai said.

There were inhibitions, of course. Pai wanted the promoters of Fortis—the Singh brothers—to go. And they did. They now hold a minuscule stake, less than 1% in Fortis. “All of us were very clear that the promoters cannot remain if we were to get involved. In the earlier construct, the promoters were still there in the company. For us, it was very important that there should be only one promoter," he said.

Despite several months of hard work on the deal that saw Pai take at least one flight a week to either Delhi or Mumbai, the deal ran into new hurdles as it approached the date of announcement. The first challenge came from Fortis Healthcare shareholders, who felt the company had received the short end of the stick in the transaction.

On 2 April, Mint reported that some shareholders of Fortis Healthcare, led by hedge fund Eastbridge Capital, had come together to oppose the deal.

Top stock market investor Rakesh Jhunjunwala, too, was reported in the media to be opposed to the deal.

With the emergence of several of these dissenting voices, shareholder vote of approval for the transaction has acquired the biggest priority. Pai, though, seems confident of the revised offer that Manipal-TPG Capital have put up. “The early signals we are getting from some shareholders has been ‘neutral to positive’," said Pai.

The shareholder vote, however, is not just the only issue that can deny Manipal and TPG Capital a victory at the end of a long battle.

The deal is also likely to face hurdles from Daiichi, which has been waging a legal battle against the Singh brothers.

Besides, Manipal-TPG will also have to fight off Malaysian healthcare provider IHH Healthcare Bhd, which has reportedly formalized a counter offer for Fortis.

There is some reprieve though, as experts believe that a domestic firm is likely to have an upper hand in terms of suitability. “Domestic firms have a higher chance of successfully acquiring assets in the country as compared to their foreign counterparts, given their understanding of the local environment and management of assets is likely to better," said Ajay Garg, founder and managing director at Equirus Capital, a Mumbai-based investment banking firm.

IHH, however, is looking to offer a cash deal and a minor premium over the revised offer tabled by Manipal-TPG.

Meanwhile, Sunil Kant Munjal of Hero Enterprise Ltd, and Dabur Ltd’s Anand Burman and Mohit Burman, who are existing shareholders of Fortis Healthcare, have offered to pump Rs1,250 crore into the firm as well. The proposal is under consideration by the board.

Pai is not going to give up soon though.

“We will re-look the deal some other time or may consider doing the deal on our own," he said.

Perhaps it’s not time yet for a good enough sleep for Pai.