Promoter share pledges on rise in past six years

Data for March quarter puts promoter pledging at 11.87% of total promoter holdings against 7.1% in 2009

Mumbai: Shares pledged by the controlling shareholders of Indian firms have risen sharply over the past six years as cash-strapped promoters use stocks as collateral for fund-raising and some lenders force these borrowers to increase the number of shares that have been pledged to secure loans when stocks have shed their value.

The value of pledged shares of NSE-listed firms went up to ₹ 1.94 trillion as on 31 March 2015 from ₹ 1.52 trillion a year ago, according to Pranav Haldea, managing director of PRIME Database. “The rise in (value of) share pledging can be linked to the rise in share prices. Besides, promoter pledging is on the rise because it is an easy way to raise funds," he said.

“This (promoter pledging) is a reflection of stress as lenders get more stringent. Banks are now ensuring that there is more promoter skin in the game," said Dhananjay Sinha, head of research, economist and strategist, Emkay Global Financial Services.

Looking at a one-year period, from March 2014 to March 2015, sectors such as capital goods, fast-moving consumer goods (FMCG) and retail have seen the most significant increases in share pledging. In the same period, the Sensex rose 25%, the BSE Capital Goods Index gained 44% and the BSE FMCG Index advanced 14.7%. 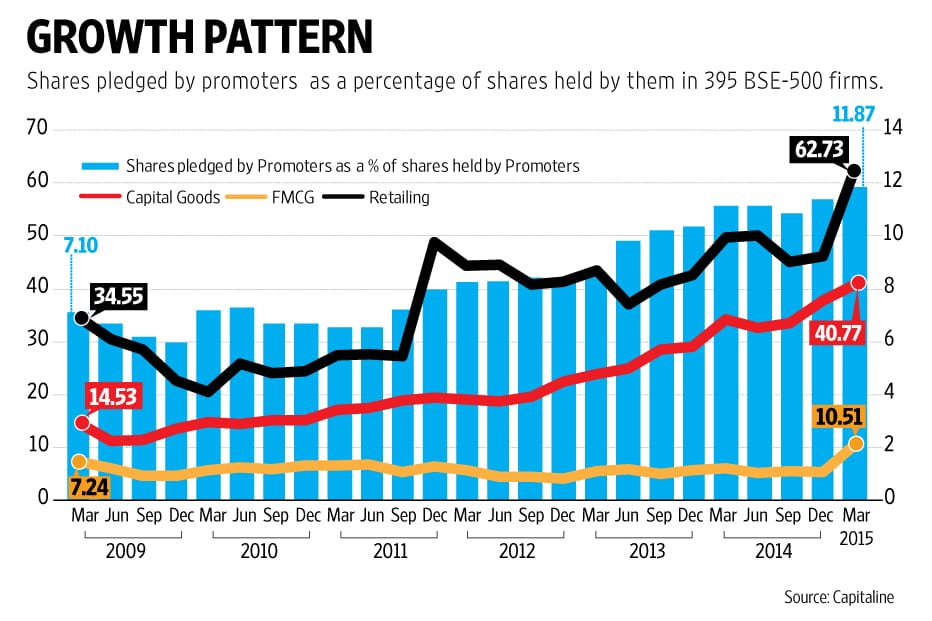 “Companies may be pledging shares for fresh funding, either for personal use or to invest back in the company as equity," said Deep Mukherjee, senior director at India Ratings and Research.

Munesh Khanna, a partner at PwC India, had another reason for the trend. “For certain companies, the imperfect corporate debt restructuring done two to three years ago is now unravelling. The cash flow from operations that were expected and promised at that point in time have not happened, requiring companies to pledge more shares," he said.

Over 40% of promoter shares in capital goods firms among the 395 on the BSE-500 stand pledged. A year ago, it was 34.16%. Promoters of firms such as GMR Infrastructure Ltd and NCC Ltd are among those who pledged their shares in the January-March 2015 quarter.

“We see mass promoter share pledging in capital-intensive sectors. This is reflective of the fact that there is not enough cash-flow generation. These firms are looking to roll over existing debt through further share pledging, unable to service them. Also, shares are being pledged to raise funds to keep the business running," said Shriram Subramanian, founder, InGovern Research Services, a proxy advisory company.

“Retail again (like capital goods) is an asset-heavy sector, and we have seen companies in this space take higher debt to fund expansion plans in the past. The operating matrices, however, have not improved," said Sinha, and added that the stress in the sugar sector may be another reason for the increase in pledging activity in the FMCG sector. Promoters of Bajaj Hindusthan Sugar Ltd, Emami Ltd, Ruchi Soya Industries Ltd and Future Retail Ltd are among those who pledged shares in the quarter ended March 2015.