Mumbai airport modernization likely to be delayed to 2014

Mumbai airport modernization likely to be delayed to 2014

New Delhi: The completion of the Mumbai airport’s modernization is likely to be delayed further by more than a year to the end of 2014, and passenger traffic at the facility is expected to reach saturation point in the following year, according to a presentation made by its operator. The airport is India’s second busiest. 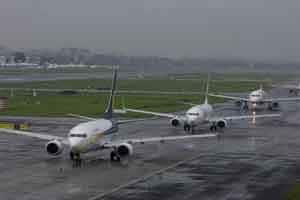 The modernization project at Chhatrapati Shivaji International Airport (CSIA), which started 10 years ago when airport operations were privatized, was scheduled to be completed by March 2013. The cost has more than doubled to Rs12,380 crore.

The new terminal “is expected to reach full capacity by 2015 under (an) unconstrained growth scenario," Jain said in his presentation. The airport has clocked a growth rate of 10.8% in passengers between 2004-05 and 2010-11, he said.

GVK Power and Infrastructure Ltd-led Mial had till earlier this year said the project will be completed by 2013, according to an investor presentation. A Mial spokeswoman confirmed the new completion deadlines.

An analyst said the airport would handle the maximum numbers of passengers it is designed for before 2015 at a 10% growth rate.

“If they grow at 10%, they will saturate before 2015," said Kapil Kaul, chief executive, South Asia Centre for Asia Pacific Aviation (Capa). “But chances that they will grow at 10% is slim because of the current economic conditions." Till 2010, Mumbai airport was the busiest in the country in terms of passengers handled. The Indira Gandhi International Airport in Delhi holds pole position now. Mumbai airport handled 29.07 million passengers, 20% of India’s total traffic, in the year ended March, compared with 29.94 million at Delhi airport. “Due to constraints at CSIA, a land-locked airport ruling out any further expansion, it is imperative to develop a second airport for Mumbai," Jain said in the presentation.

The government has cleared a proposal to build a second airport at Navi Mumbai but it is not clear when construction will start and how long it will take for it to become operational.

“It’s almost a near-crisis stage," said Kaul, “that will have an impact on entire national aviation system. The enormity of this has not so far been completely understood by the government of Maharashtra and the Centre."

Robey Lal, a former Airports Authority of India (AAI) board member, said there are “difficult times ahead". “If some traffic, especially transfer traffic, could be diverted from Mumbai to other airports while the new airports are built, it would provide some relief to users of Mumbai airport," Lal said.