New Delhi: Under a rickety iron footbridge that crosses the railway line at Sewa Nagar, near south Delhi’s Kotla Mubarakpur market, a group of men crouch on sheets, bending over mattresses in various stages of disembowelment. 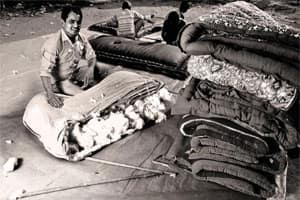 The mattress stuffers work in silence in the winter sun, bent double as the freight trains rumble by sporadically, fingers flashing with a thimble and a protective iron disc strapped onto the palm with red yarn. Most are migrants from Rajasthan, Uttar Pradesh and Bihar. They come to Delhi in the winter months to ply their trade, sleeping and cooking in the makeshift tents that are hung in the shade of a banyan tree at the end of the yard. Great heaps of rags and cotton sweepings from factory floors are piled around them.

Mohammad Shafiq supervises the small business, selling the quilts and mattresses from a stall on the Kotla side of the tracks. He has been a mattress stuffer all his life, and his father and grandfather were too. Now, he says, business is dwindling, demand is down 40% because of competition from factory-made synthetic mattresses. He doesn’t know whether the business will survive the next decade.

Most consumers today buy synthetic mattresses from big stores. But a handful of craftsmen still make mattresses the old fashioned way, stuffing the cloth, beating by hand, and stitching it all up with consummate skill.

Shafiq has a distinctive and rather eccentric dress sense. He wears a padded waistcoat and beaten-up Adidas trainers, each tied with a single lace. A pair of rose-tinted aviator-style sunglasses hangs from his shirt front and he plucks at his hair as he speaks. It is splotched orange with pinches of henna.

Although Shafiq hasn’t stitched a mattress for four or five years, his hands bear witness to his retirement; they are free of the calluses, scratches and bruises that the workers sport. Shafiq learnt the trade as a child, watching his parents work.

“They came here 35 years ago from Rajasthan," he says. “They did this and also made mustard oil. There’s more demand still in the villages—it’s less hi-tech there. But the income is less so we work here. People are willing to pay much more in the city." Shafiq charges ₹ 120 per mattress in Delhi and ₹ 90-100 in the villages.

Half of Shafiq’s business comes from emptying and re-stuffing used mattresses. It’s a laborious process beginning with the shredding and puffing of the cotton or polyester mix fibre that Shafiq buys from factories in Ludhiana and Chattarpur.

The men have a machine to do this part—the only stage in the process that relies on electricity, which is expensive. The separating of the cotton wads used to be done by hand or using a tool that looks like a harp, which would be towed from house to house and twanged to catch the attention of potential customers.

“The guys who used to go around on that cycle...that has finished now," says Shafiq, “because they could only make about five mattresses a day. Working this way is quicker." Rather than a production-line method, each man completes a whole mattress, moving from stage to stage to complete an individual piece: “That’s because they get paid by piece. ₹ 30 goes to the shop and ₹ 90 to the man." So there’s an incentive to work quickly.

After puffing, the filling is stuffed into sacks of tough fabric and sewn closed at the mouth. Each man then beats the sack with a long wooden pole until it is flat and evenly spread. “The setting is the most important bit of it," says Shafiq. “Unless the filling covers every part, the stitching becomes very difficult to do."

One of the veterans, Bhram Singh, worked as a stuffer for almost 50 years. He is now retired. “Earlier, the cotton we used was tough and it couldn’t be stitched through easily," he says, “so what we used to do is roll our kids on it till the mattress became flat." Singh grew up in western Uttar Pradesh, in the farming area now covered by Noida. He complains about the change in his profession with good-humoured gusto, wagging his finger for emphasis and scowling.

Singh’s brow is furrowed under a grey woolly hat and his voice is muffled by his lack of teeth—he has only two, and they protrude at violent angles from his lower gums, lending him a rather menacing air. “When the English ruled over India, my father would come here to make mattresses and I would accompany him," he says. “Now we hardly get any money in this business, so I quit."

Shafiq employs about 20 men, who work from 9am until 7 or 8 at night, quilting and stuffing mattresses. They can make as many as 20 mattresses or quilts a day, says Shafiq, and he sells the products at his stall and other places in the city. All the stuffers and quilters in Delhi know each other, he says, and they share business.

“I know every quilter in Delhi, 90% of them are from Rajasthan or Uttar Pradesh," he says. “There’s one near the red light at Defence Colony, there’s one in Lodhi Colony. I know them all, it doesn’t matter who sells what, there’s no competition."

One of the stuffers, a migrant from Bihar, finishes beating his mattress flat and squats down to begin to hem it. With lightning-quick strokes of his hand, he darts his needle (flattened against a stone to make it sharper) in and out of the fabric along its length, making pinpricks to guide him as he stitches a border. He pulls the length of thread along the hem and the needle rhythmically clicks against the thimble on this third finger and the disc of iron strapped to the inside of his palm.

“He is the quickest worker we have," says Shafiq. “He has been doing this for 15 years and he can make a mattress in under two hours." The man looks up to take a sip of tea from a plastic cup that has been set by his side. “It’s useless work," he says, “there’s no point to it." He threads a new needle, six inches long, with a thicker string and deftly makes six darts through the middle of the mattress pad. It is done.

Shafiq is phlegmatic about the future of the trade, but he feels that the popularity of factory-made mattresses and quilts is a false economy. “People prefer the machine-made ones because they are fashionable," he says, “but if you get one of those then after five years you either have to throw it or get a new one. These will last for 20 years but you have to keep coming back to get it re-stuffed and people don’t want to do that."

Bhram Singh is less diplomatic and details sometimes get blurred in his vehemence. “The art and skill is still in me," he says. “But now what’s the use? There’s no money or benefit in this business. The handicraft people in Dilli Haat sometimes sell our work, and what do we get for it? We get ₹ 3 and they make around ₹ 300. Now only the educated can earn, there’s no value given to the art involved."