Rajeev Bakshi, former chairman of PepsiCo Inc. in India, took over as managing director of wholesaler Metro Cash and Carry India Pvt. Ltd India in June. Bakshi has since travelled to many countries to familiarize himself with the company and the sector.

Metro was the first major global retailer to enter India when it started a fully owned subsidiary in 2003. The German firm operates five wholesale stores in Bangalore, Hyderabad, Kolkata and Mumbai, and plans to open two to four more in Punjab next year. 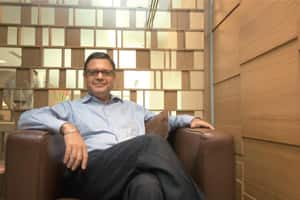 Making observations: In the first phase of his plans, Bakshi has spent hours walking around his stores and looking at things from the consumer’s perspective. Amit Agrawal / Mint

Bakshi said in an interview that India has the potential for hundreds of wholesale stores. Edited excerpts:

A new job and a new sector for you. How are you settling in?

I am a wanderer. It’s very difficult to hold me down to any assignment for more than four or five years; after that clearly boredom sets in. So if you see my track record for the last 30 years since I have been working, I have never been in an assignment for more than three years. I need new highs, new challenges and new stimulus. That’s the reason I shifted, and whenever I shifted, I looked for challenges.

Were you looking at retail as a challenging industry?

I was looking at different sectors and the clear brief to myself was that I won’t look at the fast-moving consumer goods industry again, and therefore, I had to look at a different business. I looked at entertainment very closely and it excited me, as entertainment is a pretty hard competitive day-to-day service. And I looked at retail. These are the two sectors I looked at. Modern wholesale trading is a very young business in the country as it’s hardly five-six years old.

I personally feel if the GDP (gross domestic product) is growing by 9%, there have to be specialized formats that need to come up both at the wholesale and retail ends. As far as wholesale is concerned in India, we have been masters in uni-dimensional, in the sense that most of our trading formats are very cookie-cutter. One distributor per one city and from there retailing happens. Specialized formats for trading do not exist as they exist in other countries. For example, in the US they would have different formats that would go through different distribution channels for different product categories. In India, whether its product category A, B, C or D, it’s by and large the same distributor.

How are you familiarizing yourself with retail?

I visit our Bangalore head office stores at least three to four times a day. I just stand there, just walk the corridors and just observe. The issue is if I adopt certain tactics in the short term, which basically is direct import from wherever else, in order of priority, it’s not the best thing to do, in my opinion. I think basically I have to observe, I have to get certain information and data on the current status of the business. Then, given the experience I have over the years, try to internalize that along with fresh thoughts. Once I have done that, I will marry it with the modern concepts that proliferate globally. That would be the third stage in the process.

In my first stage, I went internationally on a two-and-a-half-month familiarization of many countries. This has been followed by a two-and-a-half-month stage—I am just talking, observing, walking the corridors, walking the stores very intensively and trying to understand what is happening out there. This is all silent observation. What are the customers doing? What is their basket? Data gives us one aspect, but how they are shopping and how they are deciding? What are the check-outs? Where are the consistencies? Looking totally from the point of view of a visitor’s eyes.

The third phase would be grounded in theory. Once I am clear which directions are right and which are wrong from my mind’s eye, then I will start applying theories.

What are the observations you have made so far?

Which countries have similar markets?

Asian countries, obviously. Vietnam. China to an extent. The Asian countries are definitely closer to India. I think it’s all to do with what stage of development a country is in, what stage is the development of the modern trade, what and how exactly are the triggers working for a change from traditional ways of working to modern habits.

Metro has been the first among large global firms to set up shop in India. What potential do you see?

We’ll always be optimistic as far as India is concerned. We obviously want to exploit the potential to the fullest. Therefore, we have aggressive plans for the future. In short, we have plans for stores in Punjab, and after that we’re open at this stage. The potential will become evident one or two years down the line. Two years of 10% growth and people will be forced to change, have to change the buying habits, the distribution strategy.

The way we define our target segment is hotels, restaurants, offices and traders. Now, for hotels and restaurants, we supply the basic groceries, then I can supply imported stuff. Then I can get into specialized supplies like cleaning equipment, kitchen equipment.

How do you plan to build your supply chain—invest yourself or use third parties?

It depends on the time and scale. In the initial stages, clearly, we would use a hybrid sort of model. We will try to employ our supply engine people and then try to sort of supervise the supply chain to a large extent with some logistics providers who are working with us. This is the basic model. After that, at a certain scale, you do tend to do your own supply chain. At a certain level, you would actually start establishing a platform at the back to collect all the product fresh and distribute it. At the next stage, you also go for the collection and distribution centres. At this stage, we are trying to fix the entire issue with a direct supervision model and then we will definitely graduate in the next two to three years to the next level in some select states. We have some back-end (offices), but we have started establishing them in a bigger way. We are still constrained by whatever scale we have at this stage.

If India were to allow foreign investment in multi-brand retail that could sell directly to consumers, would you change from cash-and-carry to selling to consumers?

We will only do cash-and-carry. We definitely welcome FDI (foreign direct investment) in retail but it doesn’t impact our business model. We want to remain specialized in cash-and-carry. We have separate companies that are into that vertical but Metro Cash and Carry India will not be diluted by getting into consumer retail.