Mumbai: The country’s second largest carrier, Kingfisher Airlines Ltd, which had a 23.3% market share in September, narrowed its operating loss in the September quarter despite unscheduled capacity cuts and large one-time costs on aircraft engine repairs. 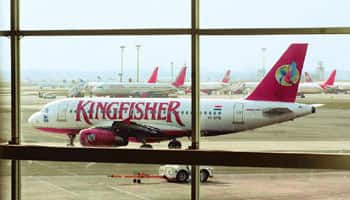 India’s airlines, which posted combined losses of $2 billion (Rs9,440 crore) in the last fiscal, are struggling to turn around operations hurt by excess capacity, intense competition and high fuel prices, after slowing economic growth led to a decline in passenger traffic. The three months ending September also are, typically, a lean season for airlines because of monsoon rains, end of summer vacations and schools and colleges reopening.

Kingfisher Airlines’ shares declined marginally by 0.10% to close at Rs47.95 on the Bombay Stock Exchange on Wednesday. The benchmark Sensex declined 0.43% to close at 16,283.49 points.

Gurgaon-based low-fare airline SpiceJet Ltd improved its performance, trimming its net loss to Rs101 crore for the quarter from Rs197.54 crore loss a year ago.

Still, Kingfisher Airlines’ operating performance improved marginally, with expenses declining 16.1%. It also reported a loss before interest, tax, depreciation, amortization and rent of Rs44 crore, against Rs207 crore a year ago, the carrier said in a statement.

“Kingfisher Airlines has restructured its operations and has continued to maintain stringent cost control," it said. “The performance is noteworthy in the backdrop of intense competition and a lean monsoon traffic season leading to an overall pressure on yields (-32% compared with last year)."

“The airlines (in general) explain away the fall in passenger traffic to lean season. What is worrying is that the airlines made cash losses in the bargain for the quarter," said Mahantesh Sabarad, senior analyst at domestic brokerage Centrum Broking Pvt. Ltd, in an email.

He also criticized airlines’ decision to offer low prices at a time when fuel costs were on the rise, describing carriers as being “over-eager to please passengers".

“Between the June quarter to the September quarter, the yields (average ticket prices) fell almost 17-19% in the industry and yet it did not raise the number of passengers flown (They [passenger traffic], in fact fell 1.9% quarter-on-quarter)," Sabarad wrote in the email.

But with increased consumer confidence numbers, and a slow, albeit, fragile recovery, seen in the economy, some analysts said domestic carriers can expect better numbers sometime in 2010.

“Airline sector is exhibiting strong recovery, with increase in passenger traffic and bottoming of yields," wrote S. Arun, senior director at global brokerage DSP Merrill Lynch, in a 5 October report. “This, along with stable oil prices, is expected to lead to sector turning profitable by next year."