Bangalore: Mid-size property developers are again acquiring distressed assets, mostly unfinished projects or undeveloped land, with the uncertainty in the sector making for pickings at prices much lower than their original valuations.

With home sales dropping in the past nine months and a slowdown becoming evident in the property market, small developers who aren’t able to complete projects are seeking a bailout. They have few other options as most lenders including banks have turned wary of the sector. 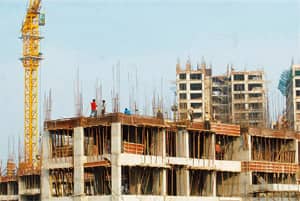 Bargain hunting : Many realty firms are actively looking for projects that are stuck for want of funding. Photograph by Indranil Bhoumik/Mint

Ajmera Realty and Infrastructure Ltd, Patel Realty India Ltd and Salarpuria Sattva Group are among those actively negotiating such deals with potential sellers.

Patel Realty is close to signing two such deals in Mumbai’s western suburbs, where prices are overheated and many projects are stuck for want of money.

“Lands with clear title and ready to go to market conditions (with all approvals inplace) take time in India, and acquiring such projects is strategic for us as (these) have a small gestation period," Patel Realty president Pravin Malkani said.

Salarpuria is negotiating a couple of such deals in Bangalore, where it is based.

Distressed assets aren’t new to Salarpuria. After the downturn of 2008-09, it acquired a majority stake in a residential project in Bangalore from local company Gold Enterprises Developers which was unable to execute it. “We have to pay one-time settlement to the bank, settle the dues with the landlord and debtors, and then continue with the project," said chairman and managing director Bijay Agarwal.

But Ajit Krishnan, sector leader (infrastructure and real estate) at consulting firm Ernst and Young, sounds a note of caution.

“While there are many such opportunities (for buying distressed assets) in the market, they have their share of challenges," he said. The buyer “has to do the due diligence and check if he can fulfil the obligations and liabilities before he takes on the project."

Opportunities in distressed assets have even prompted a real estate start-up in Bangalore to focus its business largely on such properties.

The company, formed in April, is acquiring a large villa project in south Bangalore that’s half complete and 70% sold to buyers.

“We step into the project, buy out the existing developer’s stake and clean up the debt and other liabilities in the project. Then we start on a fresh slate, hire new bankers and raise money," said the start-up’s managing director, requesting anonymity for himself and his company. Bandish Ajmera’s firm, Ajmera Realty, is scouting for distressed properties in smaller markets such as Ahmedabad and Pune.

“Though valuations of such projects look positive, we are waiting for them to get even lower. That will happen in some more months’ time if things don’t improve in the sector," Ajmera said.

Private equity (PE) funds too are showing an interest in buying or partnering in such office and residential developments, while retaining the builder to complete the projects, analysts said.

Kaustuv Roy, executive director, India, at Cushman and Wakefield, a property advisory, said his firm is negotiating such deals with PE funds, many of whom are keen on investing in lease rental generating assets.

“There are many opportunities in the market but few worth considering. There are projects where a developer is unlocking his asset for a fund but many of them are without strong fundamentals," said Roy.

Ashish Joshi, managing partner, real estate, at PE fund Milestone Advisors Capital Ltd, said his firm wants to finance projects that are “on the verge of launching or stuck for finance. We are exploring such opportunities where we secure our investment without taking equity risk."

Dinesh Unnikrishnan contributed to this story.