Bangalore: Singapore-based container terminal operator PSA International Pte Ltd will have to build a 6,700 crore facility along with local partner ABG Ports Ltd at Jawaharlal Nehru port near Mumbai after the shipping ministry rejected a request from ABG to withdraw from the consortium.

“Your request to permit ABG Ports Ltd to withdraw from the consortium has been examined in consultation with the ministry of law and after due examination it is clarified that there is no provision in the request for qualification (RFQ) and request for proposal (RFP) documents to permit such a change," the ministry said in a communication to JN port on Wednesday. “Therefore, you are requested to take early action for signing the concession agreement (with the PSA-led consortium) and take the project forward." Mint has seen a copy of this communication.

A concession agreement sets out the terms and conditions of the contract and puts the project in motion. 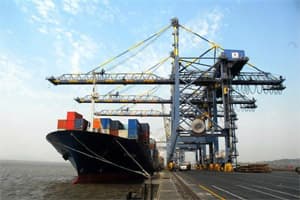 The consortium of PSA and ABG was awarded the project on 26 September 2011 after it quoted the highest revenue share of 50.828% in a public tender.

Ports contracts are decided on the basis of revenue share—the bidder willing to share the most from its annual revenue with the government-owned port gets the contract, typically stretching 30 years, according to the port privatization policy of the government.

The shipping ministry decision will revive the project that has been held up since the PSA–ABG consortium was awarded the project a year ago.

The new terminal, the fourth at India’s busiest container port, will be the country’s biggest single container terminal by size and capacity, capable of loading 4.8 million standard containers a year. It will have a berth length of 2km to accommodate seven ships at a time compared with two-three at other terminals in India where existing capacities range from 1 million to 1.5 million containers.

It is also the biggest single foreign direct investment in an Indian port project.

After the letter of the award was issued to the consortium, ABG had submitted a letter to JN port saying it would consider withdrawing from the PSA team subject to consent from the port. Since the withdrawal of a consortium member that had won the project but before signing the concession agreement was seen as a grey area in the model bid documents for public-private partnership (PPP) projects in the ports sector, the port referred the issue to the shipping ministry, which in turn took it to the law ministry and the PPP cell in the department of economic affairs for an opinion.

In its opinion, the law ministry said there was no provision for ABG Ports to withdraw from the consortium led by PSA at this stage of the project, after the letter of award was given to the successful bidder at the end of a public tender but before it signed a concession agreement with the port.

However, the PPP cell took a neutral stand on the issue, saying the project-sponsoring ministry would have to take a call on the proposal from ABG Ports.

The law ministry based its opinion on the model tender documents approved by the government in 2008 for PPP projects in ports. The model documents are followed by the port authorities while bidding out projects.

The shipping ministry decided to go by the rule book and decided against allowing ABG to withdraw from the consortium.